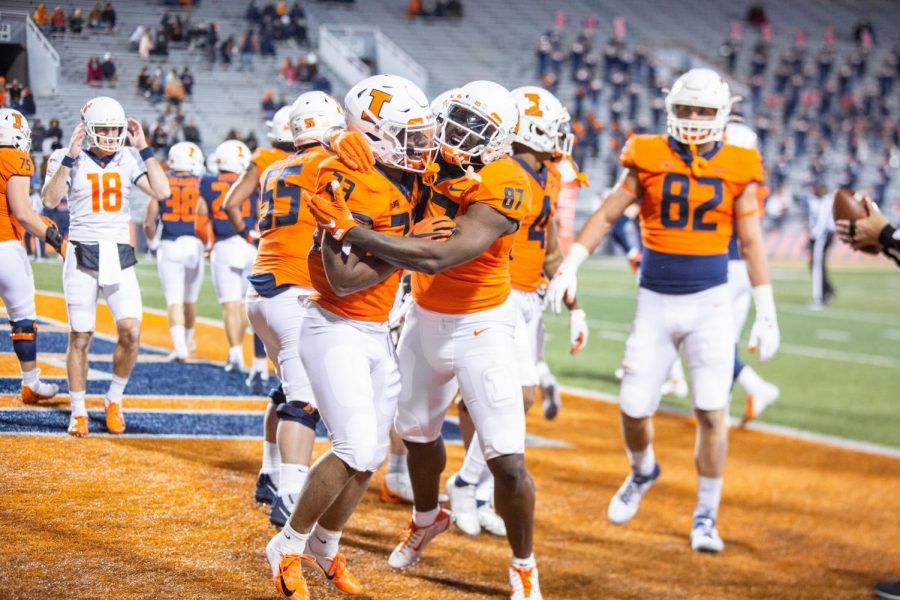 Reggie Love III (23) and Daniel Barker (87) celebrate after Love III scored a touchdown April 19 during the spring game at Memorial Stadium. Love III and Barker are both players to watch for Bret Bielema’s squad in the fall.

Last Monday, the Illini played their annual spring football game to showcase how the team has progressed since new head coach Bret Bielema and his staff took over. A lot has changed on both offense and defense for Illinois, and fans got a glimpse of what to expect for the fall.

One of the thinnest positions on the team heading into 2021 is the wide receiver group. Josh Imatorbhebhe, the team’s top receiver over the past two seasons, left the Illini for the NFL Draft. The only other players who caught a significant amount of passes last season were Brian Hightower, Donny Navarro and tight end Daniel Barker, leaving a lot of unknowns within the group.

However, two receivers that showed during the spring game that they could have a bigger role come the fall were Khmari Thompson and Carlos Sandy.

Thompson transferred to Illinois from Missouri after the 2019 season. No one was really sure how he would be used, whether it be as a receiver or primarily on special teams due to his speed. Last season he appeared in five games and was mostly used as a kick-off returner.

Despite not being in the receiver group much last year, Thompson was placed on the first team for the spring game and appeared as a wide receiver. He made a significant impact as well, totaling 40 reception yards and catching quarterback Brandon Peters’ only touchdown pass.

“He’s a guy that has been diligent about his work,” Bielema said of Thompson. “A lot of times when I’m leaving at night … he’s still here in the building watching film and trying to get better. I really think he’s seeing the benefits of putting in hard work and the rewards that come out of it.”

Sandy is a senior and has been at receiver for the past three seasons, but he hasn’t seen much action at all. His first career touchdown didn’t come until his junior year, which caused many people to be a little surprised when he was also placed on the first team.

Though he hasn’t gotten much action yet in his time at Illinois, that seems like it will change come the fall. Sandy caught Peters’ first pass of the day and ended with 56 reception yards, including a long of 24.

“Carlos is a guy that’s really jumped out to me here as of late,” Bielema said. “Carlos has grown every practice.”

Another guy that almost surely will be catching more passes than he did last season based on his performance in the spring game is tight end Luke Ford.

Ford came to Illinois as a transfer from Georgia, and despite a lot of hype surrounding his name, he wasn’t used the way many expected in his first year with Illinois. He caught just two passes last season, leaving questions as to how he would be used under the new staff.

This new staff sees a lot more value than last year’s staff did, though, because Ford had one of the best games out of everyone on the field. He caught all five of his targets, was second on the team with 88 yards and scored a touchdown.

“I appreciate Luke’s effort,” Bielema said of Ford. “I think just in this short time I’ve been around him, I’ve seen his maturity level and just in everything he’s doing take a big step forward. You put in time, and you get rewarded for it, and he’s really bought in.”

Unlike the receiving core, one of Illinois’ strongest groups may be the running backs. Whether Mike Epstein decides to come back, the running back room looks to be strong, as showcased during the spring game.

Chase Brown was used with Epstein as the main running back last year. Brown had a solid spring game, but two guys that also impressed that haven’t seen the field much yet as Illini were Chase Hayden and Reggie Love III.

Hayden came to the Illini this year after playing under Bielema at Arkansas for two years before transferring to Eastern Carolina. He hasn’t done much in his college career yet, but his senior season at Illinois may change that.

Hayden carried the ball seven times during the game for 52 yards and a touchdown, averaging 7.4 yards per carry. Bielema has watched him since high school and is excited to make him a part of his offense come the fall.

“Chase has been a guy that’s impressed me from back in the high school days,” Bielema said. “Plays with good pad level, understands it, sees where he’s going. I really thought he’d be a good addition for us here, and he’s kinda turned into that. … Should be a valuable player for us in our offense.”

Love III played in six games for Illinois last year as a freshman and didn’t do anything significant. He had only 10 carries all year, but his role is set to change significantly his sophomore season.

Love III received a ton of high-profile offers while in high school and is someone the Illini have been excited to play for two years. He is a little smaller at 5-foot-11 but makes up for it with his quick feet. Love III ran for 63 yards and a touchdown during the spring game.

Defensively, there wasn’t a lot to show during the spring game. The competition of backups didn’t allow the defensive backs or linebackers to show anything off, but there were position changes to look out for, two of which showed out in the game.

Gay and Carney Jr.’s names seemed to be called out all night, as the two combined for six tackles and three sacks with a lot of hurry-up on the opposing quarterback. It was only one game, but Bielema is excited to see the duo perform in the fall.

“Isaiah’s been an intriguing guy since we arrived here,” Bielema said. “Obviously a guy that’s put together the right way and a very impressive athlete. I think when you have Owen Carney and Isaiah Gay on the edges there, … it’s gonna be tough to move the ball against us.”

The spring game ended in a 65-15 blowout for the first team and didn’t tell fans everything they needed to know for the upcoming season, but it did give an idea of what’s to come this fall. On both offense and defense, it appears many players will take on bigger roles than they have before as Illini, and they were able to show that off to fans during the spring game.