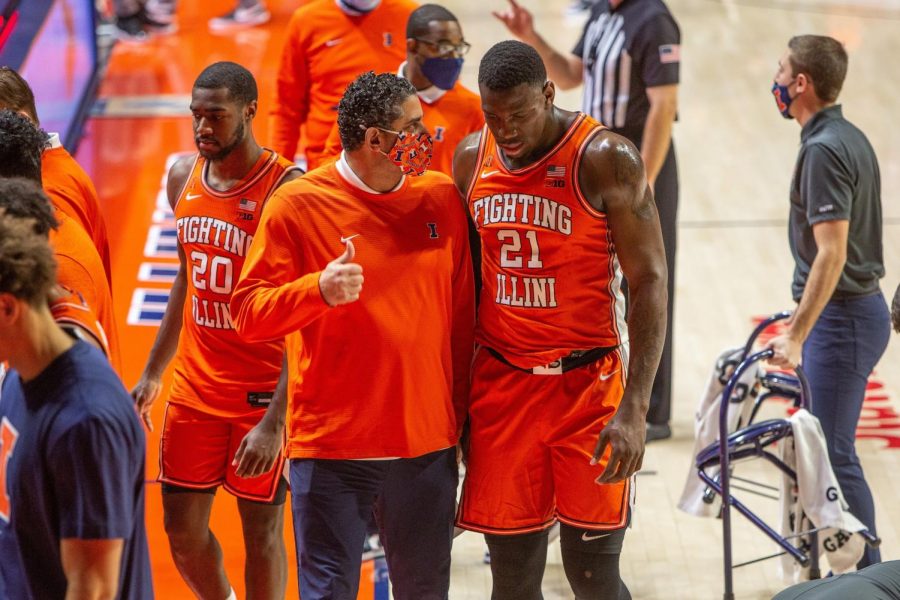 Illinois assistant coach Orlando Antigua (left) talks to Kofi Cockburn during the game against Penn State Jan. 19 at State Farm Center. Antigua has been rumored to be leaving Champaign for Kentucky.

It was March 14. It didn’t matter that the Big Ten had Michigan — which Illinois beat by 23 — as the Big Ten regular season champion. Illinois had just won its first Big Ten tournament title and secured its first No. 1 seed in the NCAA tournament since 2005. After the Illini finished the season ranked second in the final Associated Press poll, it appeared the only person standing in the way of a Final Four berth was Oklahoma State’s Cade Cunningham — not Loyola Chicago’s Cameron Krutwig. The program was in stable condition in head coach Brad Underwood’s eyes.
“Not to my knowledge,” Underwood said after being asked if he expected changes to the staff in the offseason.
The path of securing blue blood status was in reach. Those were the days.
Since Sister Jean and the Ramblers have knocked off Dosunmu and company in the Round of 32, the trajectory of Brad Underwood’s program has tossed and turned.
But the problem isn’t with the roster. Players come and go and constantly seek the best possible opportunity for themselves. In the grand scheme of the program, it doesn’t matter that Adam Miller, who would probably declare for the draft after his sophomore year, might transfer. Underwood was able to replace him with Alfonso Plummer, a Utah guard who is a proven 3-point shooter.
The bigger issue: Coaches jumping ship.
After a successful season for a program that’s struggled for a while, it’s common for assistant coaches — or even the head coach — to take advantage of a different opportunity. After Loyola Chicago made its second Sweet 16 in four years, Oklahoma was able to lure Naperville native Porter Moser away from the Ramblers. While Gonzaga is a juggernaut, Arizona was able to pluck assistant Tommy Floyd from Mark Few’s staff.
In Illinois’ case, Underwood isn’t going anywhere. However, the possibility of assistants Orlando Antigua and, especially, Ron “Chin” Coleman leaving for other assistant jobs signals the potential fact that Illinois will never be considered one of the nation’s most elite programs.

According to a Chicago Tribune report by Shannon Ryan, it’s very possible that John Calipari and the Kentucky Wildcats will be able to land both assistants despite Illinois’ willingness to substantially increase their salaries.
The immediate effects of a departure would significantly hurt the Illini’s ability to keep Kofi Cockburn, who declared for this year’s NBA draft, on campus, as Antigua has a strong relationship with the Jamaica native. But the idea of Antigua leaving makes a lot of sense.
He’s 48 and has head coaching aspirations. After a disappointing tenure at South Florida, he was able to restore his image in Champaign. Unfortunately for Underwood, though, Antigua has history with Calipari, having been his assistant at both Memphis and Kentucky.
Antigua has seen what Kentucky is capable of. He has seen Calipari land stars such as John Wall and DeMarcus Cousins. He’s seen Calipari win the sweepstakes for Chicago native Anthony Davis. He was sitting courtside with the former New Jersey Nets coach when they knocked off Kansas for the national championship in 2012.
It might not matter that Illinois is willing to make Antigua the highest-paid assistant coach in the United States. Illinois can’t provide Antigua Rupp Arena. Illinois can’t provide Antigua consistent Final Four contention. Even after Kentucky finished with its worst record in generations, former Wildcat assistant Tony Barbee was able to land a head coaching job.
While Antigua has history as a head coach, Coleman has none at the collegiate level, and it’s not clear if he ever wants to be the main man at the helm. Considering multiple offers — DePaul, Kansas and Kentucky — Coleman is just as big of a threat as Antigua to leave Underwood and the roster.
In the film “Moneyball,” the Oakland Athletics admitted they are a farm system for top-tier franchises like the Boston Red Sox and the New York Yankees, simply because they don’t have the resources to pay players. In college basketball, though, it’s not all about the money; It’s about taking advantage of opportunities.
This is a problem Illinois has dealt with for years, though it occurred mostly with its head coaches. Lon Kruger couldn’t turn down the chance to coach the Atlanta Hawks. Bill Self, who produced three straight strong seasons at Illinois,  couldn’t say no to being Roy Williams at Kansas. In a different circumstance, Shaka Smart decided to stay at Virginia Commonwealth University over the chance to build a program only seven seasons after a 37-2 season.
Does anybody think a Baylor assistant would leave Scott Drew for Calipari? Would a Virginia assistant leave Tony Bennett for a non-head coaching gig? In the past two tournaments, March Madness has produced two first-time champions. Villanova won two titles in three seasons with veterans.
Illinois has the resources and the willingness to spend money to compete. Chicago, a hub for high school recruits, is only a few hours away. But after its best regular season in 16 seasons, all the Illini have to show off is a second-round exit.
If Antigua and Coleman were leaving for head coaching jobs, so be it. But with Calipari having the chance to lure them away for assistant gigs after his worst season in Lexington, Illinois is taking two steps back after a step forward. The only way Illinois can fix this problem is to consistently win under Underwood for a decade.