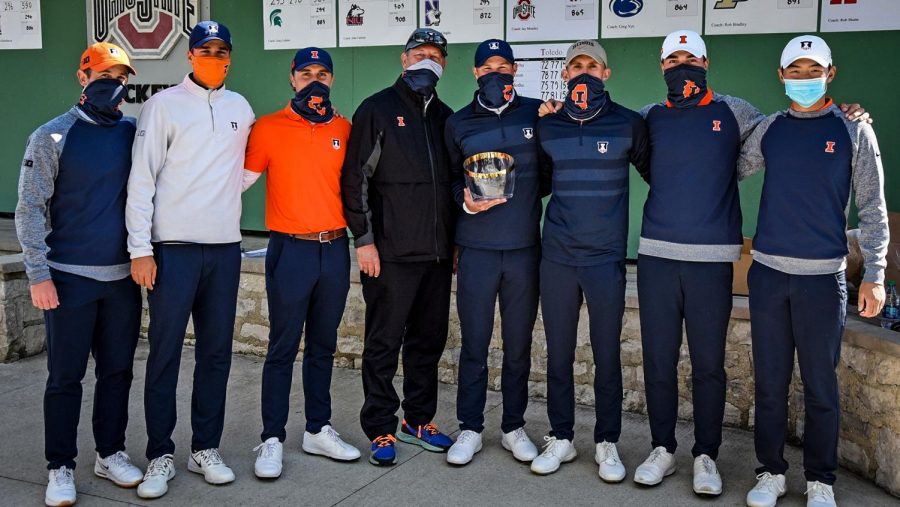 The Illinois men’s golf team poses for a photo at the Robert Kepler Intercollegiate tournament in Columbus, Ohio on Sunday. The team is headed to Carmel, Indiana this weekend in hopes of winning their sixth straight Big Ten Championship.

Since Mike Small became the head coach of the Illinois men’s golf team in 2009, the Illini have won 10 Big Ten championships. This weekend they have the opportunity to win their sixth straight, but Small isn’t focused on history.

It’s not hard to see how players could get caught up in the glory of the past. On any given weekend you can watch Illinois alumni compete professionally on ESPN. On the walls of the Demirjian Indoor Golf Facility, where the team practices, are 17 Big Ten championship banners dating back to 1923.

Illinois golf has prestige in its name, and not much has changed this year. The Illini are currently ranked 10th in GolfWeek’s national collegiate rankings. Their 92-8-1 record in head-to-head matchups gives them the fourth-most wins in the nation. Six of their eight losses have come against top-25 teams.

This team is elite, but even coming off a season finale win at the Robert Kepler Intercollegiate in Columbus last weekend, Small is focused on ways his team can improve.

Small has hammered the idea of the Illinois golf standard into the minds of his players. What is the standard? It’s the idea that the team doesn’t aim to “peak for the Big Ten championship or peak for the NCAA championship.” Instead, the goal is to reach a high level of play and work to stay there.

“I think that breeds more consistency and more success over time,” Small said.

With that standard comes pressure. Pressure to perform and pressure to succeed. When Illinois basketball won the Big Ten Tournament title in March, we saw the biggest on-campus celebration in the last 15 years. For the golf team, though, a conference championship is expected; anything less could be seen as a disappointment.

“We try to throw expectations out the door,” said senior Michael Feagles. “Are we expected to win this weekend? Maybe, I don’t know. But the only thing expectations do is limit the capabilities of a team. We believe if we go there, and we do things we’re doing and we play the way we can play, Illinois golf, everything’s gonna work out the way it should.”

The Big Ten Championship will take place in Carmel, Indiana this weekend. The teams will compete over three days starting Friday at Crooked Stick Golf Club. Temperatures in Carmel will be around 70 degrees all weekend, with a small chance of rain on Sunday.