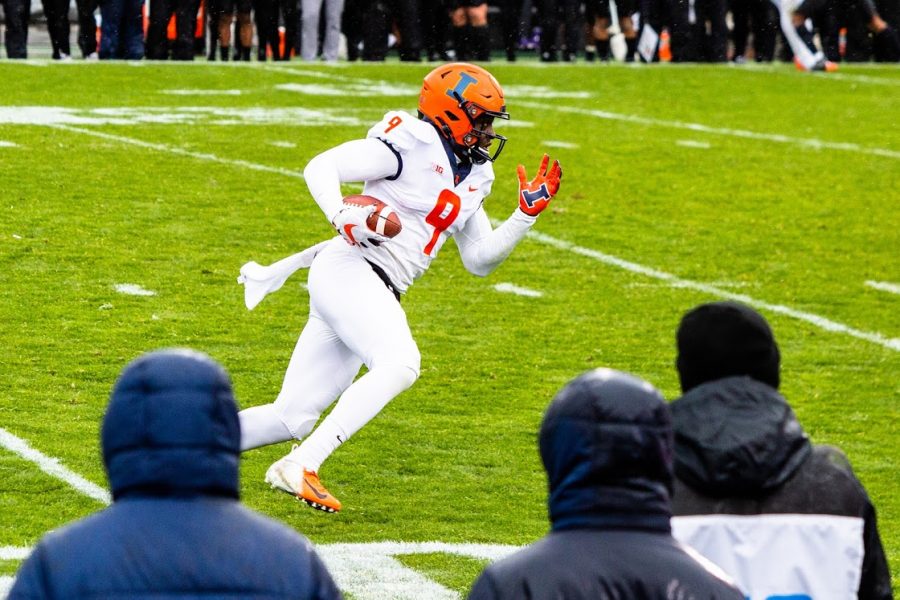 Josh Imatorbhebhe runs after making a catch against Northwestern Dec. 12 at Ryan Field in Evanston, Illinois. Imatorbhebhe signed with the Jacksonville Jaguars as an undrafted free agent.

Though he missed out on getting selected during the 2021 NFL Draft, former Illini wide receiver Josh Imatorbhebhe has signed with the Jacksonville Jaguars as an undrafted free agent.

Imatorbhebhe played for the University of Southern California for two seasons before transferring and using his last two years of eligibility at Illinois. After not having much of a role in Los Angeles, Imatorbhebhe made an immediate impact in Champaign, quickly becoming quarterback Brandon Peters’ top target in 2019. The Suwanee, Georgia native made 33 catches for 634 yards, averaging 57.6 yards per game. His nine touchdown receptions were the fifth-most in the Big Ten and are the second-most in program history.

The biggest game of his college career came against Michigan State, making four catches for 178 yards to help the Illini claw back from a 25-point deficit and beat the Spartans in East Lansing in the largest comeback in program history.

As a redshirt senior in 2020, Imatorbhebhe started seven games and finished with 22 receptions, 297 yards and three touchdowns, all of which were the most on the team.

The 6-foot-2, 220-pound receiver impressed at the Illinois Pro Day, recording 46.5 inches in the vertical jump, which would have been one of the highest in NFL Combine history.