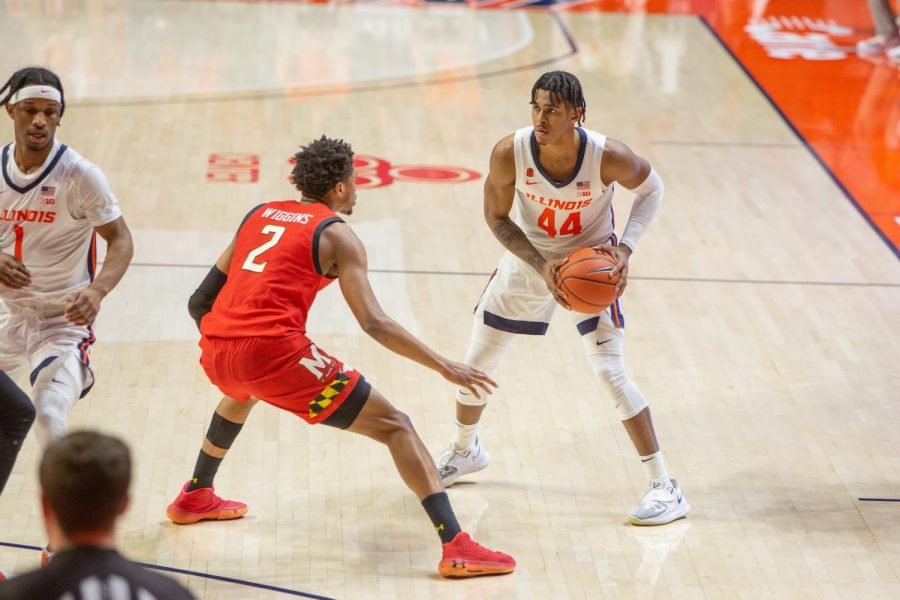 Freshman Adam Miller scans the court for teammates against Maryland Jan. 10 at State Farm Center. Miller announced Saturday afternoon that he is transferring to Louisiana State.

“The biggest reason I chose LSU, you know, (head coach) Will Wade; I had a great relationship with him,” Miller told Jeff Goodman on The Field of 68 when asked why he chose the Tigers. “He understood my game; he understood my feel. … I feel like he’s a good coach; I feel like he knows my game. I think he can take advantage of that, and I told him I just want a coach that trusts me, and I can come in and win and help them get the job done, so I felt like that was best at LSU.”

Miller was a four-star recruit out of Morgan Park High School in Chicago, Illinois. He was the fourth-highest-rated commit in Illinois history and was named Illinois Mr. Basketball in 2020. The Peoria native averaged 8.3 points, 2.8 rebounds and 0.8 assists while starting all 31 games for the Illini last year.

He also was a threat from beyond the arc, shooting 34% from deep while knocking down 52 treys, the second most on the team behind only senior Trent Frazier.

“Adam was a big part of our success this season, starting every game as a freshman and contributing not just on offense but defensively as well,” head coach Brad Underwood said in a statement April 1. “He has a very bright future ahead, and we wish him all the best.”

LSU shot the three well last season, finishing with the fourth-most treys and the third-best 3-point percentage in the Southeastern Conference. The team also made the NCAA tournament as an 8-seed, knocking off 9-seed St. Bonaventure before falling to top-seeded Michigan.

But the Tigers have seen a lot of turnover with their roster, as several players have declared for the NBA Draft, including Trendon Watford, Javonte Smart and Darius Days, three of the team’s top four scorers last season.

They did land Missouri transfer Xavier Pinson, and Miller is expected to slot into the starting lineup as a lead guard.

“One thing I learned from Coach Underwood is to be a man about everything you do,” Miller said. “Be on time, make sure you get the job done; whatever you gotta do, make sure you get it done, so I’ll definitely take some things from that team and from my other teammates that were older than me — Ayo (Dosunmu), Kofi (Cockburn). … They taught me a lot, so I feel like I’m prepared the most I’ve ever been right now to take on anything in the basketball world.”

Miller was expected to take on a more prominent role on offense with the departure of junior Ayo Dosunmu to the NBA Draft, though the return of Frazier, Jacob Grandison and Andre Curbelo, along with the addition of Utah transfer Alfonso Plummer and incoming freshmen Brandin Podziemski, RJ Melendez and Luke Goode, should have the Illini more than set to fill in his production.