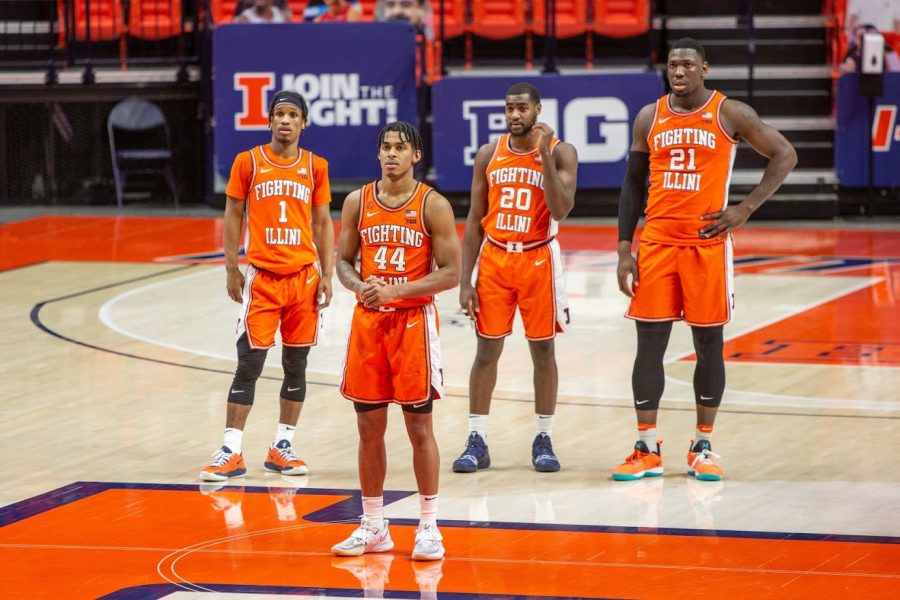 The Illinois men’s basketball team waits for what may be called at their game on Jan. 19 against Penn State. Although Illinois basketball will be losing key players, they have transfers coming to the team.

The month of April was one of the most bizarre offseason periods in college basketball history. With the one-time transfer rule in effect, the transfer portal is filled with talented players from all leagues, including the Big Ten.

The outlook for many Big Ten teams next season changed. Expected names like Ayo Dosunmu and Luka Garza have departed, but some players have surprisingly transferred in and out of the league.

Here’s a look at which teams have gotten better, worse or stayed roughly the same this offseason. For the sake of clarity, I’m only addressing roster moves made since the season ended. So an incoming 2021 player who committed prior to this offseason will not be included in my assessments.

When the offseason started, the Hoosiers looked like they could be one of the worst teams in the Big Ten next season. Archie Miller was bought out, their priority target Brad Stevens turned down the job and more than half of the roster entered the transfer portal.

Indiana then hired former New York Knicks coach Mike Woodson, who swiftly turned the program around. He retained underclassmen Race Thompson, Khristian Lander, Jordan Geronimo and Trey Galloway. The biggest news, however, was the surprise decision made by Trayce Jackson-Davis to spurn the NBA and return to Indiana for another season. Jackson-Davis is currently the only player among the top 15 scorers in the Big Ten who is guaranteed to return next season.

The Hoosiers did lose wings Armaan Franklin and Al Durham in the portal, but given how bleak things looked after Miller was fired, they are certainly in a great spot compared to where they were just a month ago.

A year ago, Mark Turgeon struck out left and right on key point guard and center replacements. Yet, the Terrapins still managed to make the NCAA tournament with a relatively young roster. Turgeon did not face those same problems this offseason, landing Rhode Island point guard Fatts Russell and Georgetown big man Qudus Wahab. Both players were double-digit scorers at their previous schools and should be immediate impact players.

The Terps likely are losing senior Darryl Morsell, who entered both the NBA Draft and transfer portal, while juniors Aaron Wiggins and Eric Ayala are testing the draft waters (while maintaining their college eligibility). But considering neither Wiggins nor Ayala is expected to be drafted, both should return to help give Turgeon one of his best teams in his Maryland tenure.

It’s bizarre for a team that did as well as Illinois did last season to have a ton of roster turnover, but that’s exactly what happened to Brad Underwood’s group this season. Dosunmu, as expected, has forgone his remaining eligibility. Kofi Cockburn has declared for the draft, and though he does have his eligibility, the buzz surrounding the big man is that he will turn pro. Junior Giorgi Bezhanishvili also announced he will be turning pro.

The surprise move was the transfer of freshman Adam Miller. Even with those departures, Underwood has added some pieces to make up for the losses. Illinois landed Utah senior guard Alfonso Plummer to fill the role of a scoring guard and Florida sophomore forward Omar Payne to fill the void up front. They also secured a commitment from 2021 four-star guard Brandin Podziemski.

It’s safe to say this year’s Illinois team won’t be quite as good as last year’s squad. But relative to where things stood at the beginning of the offseason from an expectations standpoint, this team is in a relatively similar position. A surprise return from Cockburn or major transfer addition is what could elevate the current roster.

The Wolverines were able to retain at least one of their four key seniors from last season when Eli Brooks announced his return. They did lose Mike Smith and Chaundee Brown, and though Isaiah Livers has yet to make a decision, he’s expected to turn pro.

Most of the Wolverines’ moves for next season were made in the fall, as head coach Juwan Howard nabbed the No. 1 recruiting class in the country. Retaining Brooks and Hunter Dickinson, in addition to that top class, is just enough to keep expectations afloat, which is another Big Ten regular-season title.

With no seniors getting minutes last season, Purdue was expected to bring back its whole roster. No key players have transferred in or out. Trevion Williams has declared for the draft while maintaining his eligibility, and he is expected to return. If he does, Matt Painter should have one of the best teams in the Big Ten next season.

The Buckeyes were able to retain senior Kyle Young for a fifth season, but not CJ Walker. Their offseason will be dictated by the decisions of Duane Washington Jr. and E.J. Liddell, who both entered the draft while maintaining their eligibility. Both are expected to return, and if they do, Ohio State will be a force to be reckoned with next season.

The one glimmer of hope for Rutgers is the potential return of Ron Harper Jr. Once seen as a surefire NBA player, Harper slumped in the second half of the season and may consider returning. If he comes back, he and Geo Baker alone should make the Scarlet Knights competitive. But if he leaves, it’ll be a reset year in Piscataway.

With Luka Garza’s expected departure, the Hawkeyes still expect to be relevant in the Big Ten picture. Joe Wieskamp has declared for the draft and is considered a true 50/50 decision.

The Hawkeyes’ big loss, though, was the surprise departure of sophomore CJ Fredrick, who entered the transfer portal. Fredrick was one of the best shooters in the league last season and was expected to be a key guy for Iowa this season. Senior Jack Nunge also elected to play his grad year elsewhere.

The Hawkeyes did return Jordan Bohannon for his super senior year, but the losses of Fredrick, Nunge and potentially Wieskamp, along with no big roster additions, have made it a rough offseason in Iowa City.