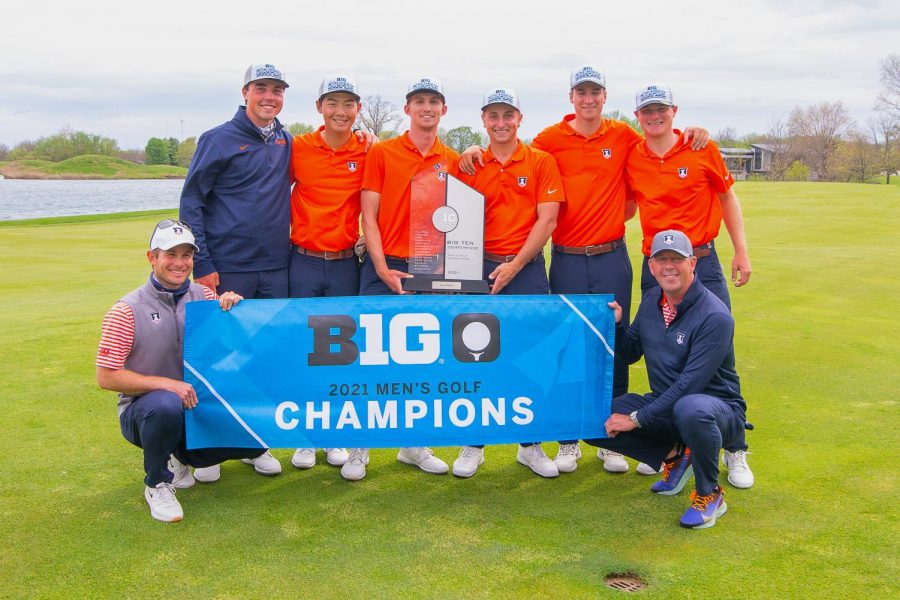 The Illinois men’s golf team stands with their trophies after a big win on Sunday. They bring home their sixth consecutive Big Ten title.

The Illinois men’s golf team ran a close race with Iowa, but in the end, the Illini walked away as Big Ten men’s golf champions for the sixth straight year.

The Illini finished one stroke ahead of the Hawkeyes, spurred ahead by eight birdies and an eagle in the back nine of the final round.

“There were a lot of mistakes the first six or eight holes,” said head coach Mike Small. “We had a bad look, tentative or protecting. But something flipped it around. The mojo changed, and we got things going the right way, and they just took it and ran with it.”

Senior Michael Feagles joined Dumont de Chassart on the All-Championship team after finishing fifth. Feagles sank the final putt that clinched the victory for the Illini with a par on the 18th hole. With that putt, Feagles ended his season with a stroke average of 70.83, the lowest in the Big Ten, earning him the Les Bolstad Award. He bfeafecame the eighth Illini to win the award.

Junior Tommy Kuhl finished tied for 10th despite recording more bogeys than birdies throughout the event. Kuhl really struggled in round two, where he recorded six bogeys. Kuhl was able to pick it up in round three, recording three of his five birdies in the final round.

Sophomore Jerry Ji was the final Illini in the top 20, as he finished tied for 16th. Like most of the Illini, Ji struggled in the second round and the beginning of the third. He recorded just seven birdies and 17 bogeys.

Senior Giovanni Tadiottto struggled the most this weekend. Tadiotto recorded 14 bogeys, three double-bogeys and a triple bogey. He also recorded three birdies and the team’s lone eagle in the back nine of the final round, playing a significant part in the Illini clinching the lead toward the end.

Coming in ranked 39th in the nation, 30 spots behind the Illini, the Hawkeyes were the most likely team to challenge the Illini this weekend, and they did just that. Iowa’s Mac McClear won the individual championship with his three-round score of 215 (-1). McClear was the only golfer to finish below par.

“I’m really happy for the team,” Small said. “They persevered through a lot of adversity this week. Winning or losing is just a byproduct of how you operate that day and handle situations. We were down and out; it was not looking good. But we built a little momentum, and all of a sudden we just caught the train and played really solid.”