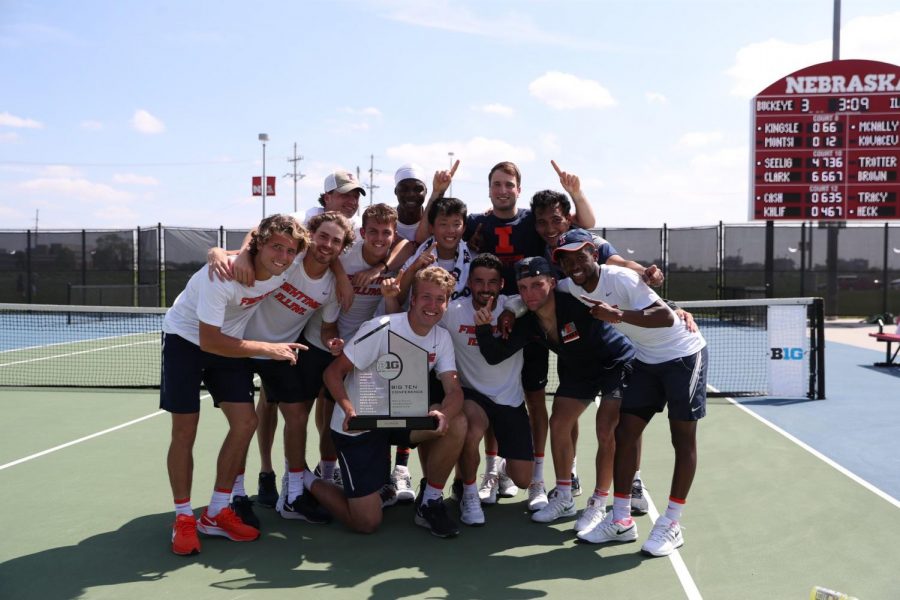 The Illinois men’s tennis team poses with the Big Ten Championship trophy after winning the tournament on Sunday. The title is the program’s first since 2015.

Illinois men’s tennis has been working toward the Big Ten Tournament all season. For its seniors, the championship run was five years in the making. And as for the program, Illinois has been pining for another title since earning its last in 2015.

Illinois kicked off the tournament against Indiana on Friday. Entering the match, No. 4 Indiana had just defeated Wisconsin 4-0 to advance into the quarterfinals, while No. 1 Illinois were granted a first-round bye.

“There were definitely a lot of nerves coming into the tournament, the anticipation and everything, but it was sort of like the good nerves, and I was pretty excited,” Hunter Heck said Friday.

When Heck played throughout the weekend, it was easy to forget that the freshman was playing in his first Big Ten Tournament. Against Indiana, Heck put up two points: one coming from a 6-3, 6-2 victory in singles, and the other from a 6-2 win with Aleks Kovacevic in doubles. Just before he and Kovacevic were finished, Alex Brown and Zeke Clark had laid the groundwork for the doubles point, having pulled off the first 6-2 upset.

The rest of the singles play ultimately boiled down to Noe Khlif and Kovacevic. The two veterans won their respective matches 6-1, 6-4, and 6-3, 6-2, and topped Illinois’ first round off with a 4-0 sweep over Indiana.

In Saturday’s semifinals, Illinois faced off against No. 2 Michigan. The Illini got off to a lethargic start in doubles play, as they struggled to break serves and push past the Wolverines’ aggressive returns at the net. Michigan secured the first point after picking up wins against Brown and Clark, as well as Heck and Kovacevic.

Despite its lackluster start, Illinois didn’t let the deficit cloud its vision. The guys remained locked in, ready to take to the courts for singles.

“We have really strong singles players,” Khlif said Saturday. “So I was pretty confident with the team still after the doubles. It’s just a point. You gotta win four points to win, so everybody has a battle, so you just have to keep fighting and try to win your match to help the team.”

Kovacevic earned the Illini their first point after taking his first set 6-4 on an unreturned lob and his second set 6-1 on a break point.

Brown and Siphosthando Montsi then pulled off back-to-back wins to give the Illini the lead. Brown finished two sets both scored at 6-4, and moments after, Montsi chalked up straight sets of 6-2, 6-3.

For the final match point, Khlif battled it out in three sets. He cruised through his first at 6-1 but failed to carry that same momentum into the second. After back-and-forth leads, Khlif couldn’t close out the match point on his serve, enabling his opponent to take the set, 6-7(2). That missed opportunity, Khlif said, resulted in a loss of focus and put him in somewhat of a “mental battle” that he needed to dig himself out of. Sure enough, with credit to his grit, Khlif delivered for the Illini with a 6-3 third set.

With the 4-2 victory over Michigan, Illinois was headed to the final Sunday to compete against the No. 1 seed in the East: Ohio State.

The Illini’s rivalry with the Buckeyes runs deep. In three out of the past four tournaments, Illinois has come short of becoming the champions because Ohio State has continuously edged past the team. But this time around, Illinois was determined to overcome whatever Ohio State served.

Montsi and Khlif set the tone for the doubles point despite being down early in the match with a tied set at 2-2. With Montsi working at the net and Khlif returning balls in the back, the two refused to ease up and breezed through the subsequent points to pull off the first win at 6-2.

On court three, the Buckeyes came out aggressive against Heck and Kovacevic. But the duo managed to clinch the doubles point after Kovacevic served up an ace to take the final match point, closing the set at 6-4.

In no time, Ohio State took the lead after picking up singles wins on courts two and three with Montsi and Brown falling in straight sets.

Heck put up the first singles point up on the board for the Illini. Despite dropping his first set 6-0, Heck took the remaining two sets with an element of finesse. His opponent dictated the ball throughout the courts well and closed in on several opportunities to end the match, but Heck utilized scrappy plays to bounce back, winning 6-3 and 7-5.

Kovacevic lost his singles match in straight sets, leaving Noe and Clark the only two left in play.

Needing only one match to take the overall victory, the Buckeyes closed in on Khlif. But just as the match before, Khlif battled back, winning his match 4-6, 6-3, 7-5.

With the score tied at 3-3, everything came down to the wire on court four. Clark stuck through each play and point, trying to claw his way through three sets. Having lost his first set at 6-7(7), Clark outplayed his opponent, tiring him out through long rallies to win the second at 6-3.

In the final set, neither player could get ahead by a substantial margin, and the match entered into a tiebreaker. Eventually the score sat at a 5-4 match point, and Clark was able to clinch. With a baseline forehand that forced a netball, Clark delivered the final blow and won 7-6(4). The screams and “All Day Zeke” chants rang throughout Dillon Tennis Center as the Illini engulfed Clark on the court. The Illini were Big Ten Tournament champions.

“It’s been a long time coming,” Clark said in a press release. “It’s always a battle with the Buckeyes. The reason I came back for my fifth year was today: to be able to play for a championship and to beat Ohio State. To be the guy to clinch? I can’t even put into words how I feel.”