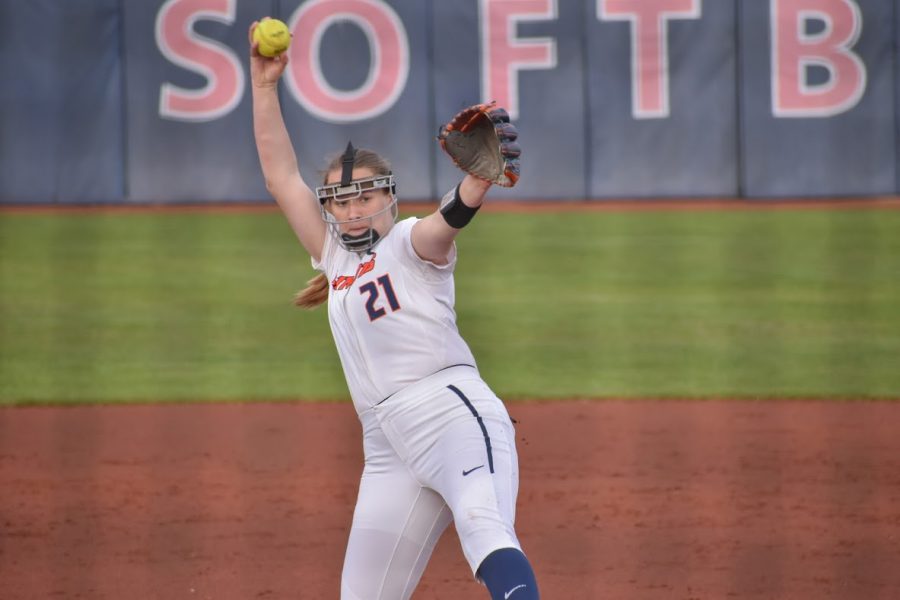 Junior Sydney Sickels throws a pitch during the game against Purdue on April 17. Illinois split the series against Northwestern 2-2 this past weekend.

After a tough four-game series against Northwestern, Illinois will return to Champaign with an overall record of 22-14. The Illini fought hard against the Wildcats, as they strove to keep their focus and competitiveness throughout the series. Their ability to stay in the moment and work diligently toward a win came with obstacles, but they were resilient in the fight.

“The series was a big learning moment for our team,” said sophomore Gabi Robles. “With every game we play, we’re learning new things about our team, what our strengths are and what we need to work on. We see each win and loss as a growing moment.”

The team came out swinging, as Loya hit her team-leading fourth home run of the season to go along with a 2-for-3 outing with a run batted in and a run scored. Steiner went 2-for-4 at the plate. Sophomore Delaney Rummell followed up with an RBI double before sophomore Kelly Ryono hit a double, and freshman Morgan Scivally lined an RBI single.

The Illini and Wildcats split the games in the Saturday doubleheader, with the Wildcats taking game one 7-6 and the Illini grabbing the game two win 4-3.

Illinois’ bats were hot during game one, as Ryono went 3-for-4 with two runs scored, while junior Kailee Powell and senior Shelby Stauffenberg each went 2-for-3 with an RBI. Rummell picked up her 24th RBI of the season.

As Sickels went to close out the game in the bottom of the seventh with a one-run lead, Northwestern came through with a two-out, two-run walk-off home run to win game one. Sickels pitched 6.2 innings, giving up nine hits and seven runs while striking out five. Her record this season now sits at 12-3.

In game two, the Illini progressed with their desire and determination to exact revenge and get a win. Rummell, going 1-for-3, and senior Katie Wingerter, going 1-for-4, both notched two-out RBIs. Powell went 2-for-4 with two RBIs and two runs scored, though her huge go-ahead two-run home run in the seventh inning of game two sealed a 4-3 Illini win.

Junior Addy Jarvis pitched 6.2 innings for the Illini, giving up three runs and striking out three. Sickels entered in the bottom of the seventh with two outs to record the final out of the game, which was a full count, bases-loaded strikeout to secure the win.

Illinois dropped the final game, 6-3, splitting the weekend’s four-game series. Rummell crushed a three-run home run in the first inning, but unable to plate any more runs, the Illini gave up the Sunday afternoon series finale.

Sickels started in the circle, going 4.0 innings, giving up seven hits and five earned runs. Jarvis entered as a relief pitcher in the fifth inning, going 2.0 innings and giving up one run while striking out one.

“I would say that our biggest downfall, for lack of a better word, is ourself,” Robles said. “I think that we beat ourselves rather than other teams beating us. As soon as we’re able to completely control that, I think that we’ll be pretty much unstoppable.”

This upcoming weekend, the Illini will continue their season by playing their last home four-game series against Ohio State. The first game of the series will be Friday with first pitch scheduled for 5 p.m. central time on the Big Ten Network +.