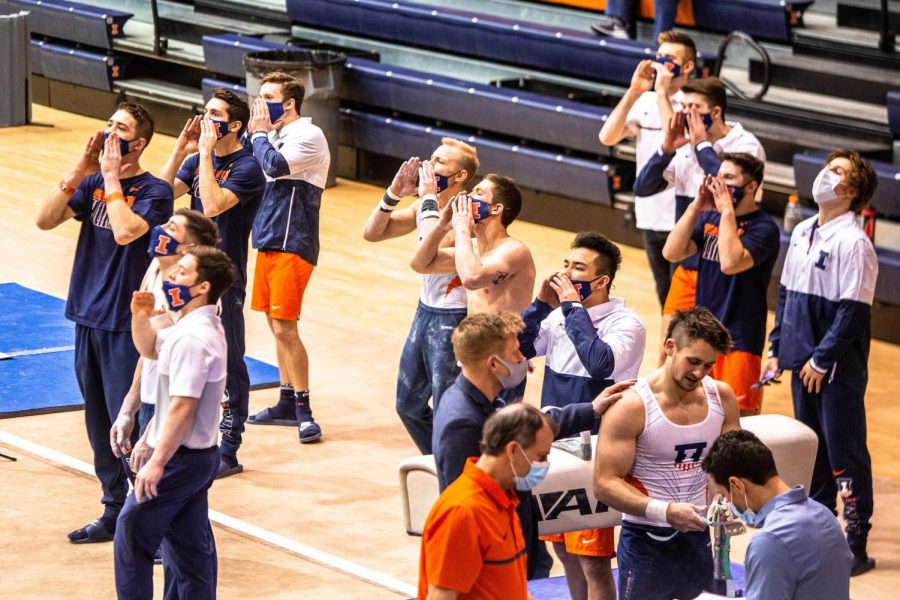 The men’s gymnastics team cheers during the meet against Ohio State Jan. 23 at Huff Hall in Champaign. The Illini had injury issues all year, though they still had several individual accolades throughout the season.

The Illinois men’s gymnastics team wrapped up its 2021 season a few weeks ago at the NCAA championships, claiming sixth place in the team competition. Though the team didn’t finish where it hoped to, junior Ian Skirkey won an individual championship on pommel horse. Two weeks earlier, fellow junior Michael Fletcher won the Big Ten vault championship, and a month before that, volunteer coach Alex Diab won the still rings championship at the USA Gymnastics Winter Cup.
While Fletcher, Skirkey and Diab’s titles were the highlights of the 2021 season, there was more to the season than just these three accomplishments.
COVID-19 undoubtedly was the defining characteristic of the season. After the pandemic brought the 2020 season to a screeching halt, the team lost not only the rest of that season but also its summer practice. Under normal circumstances, the team spends the summer on campus, practicing in Kenney Gym to improve routines. But because of the pandemic, the team spent the summer of 2020 scattered across the country — or stuck abroad in junior Léo Valentin’s case. It wasn’t until August that everyone arrived on campus and got to work.