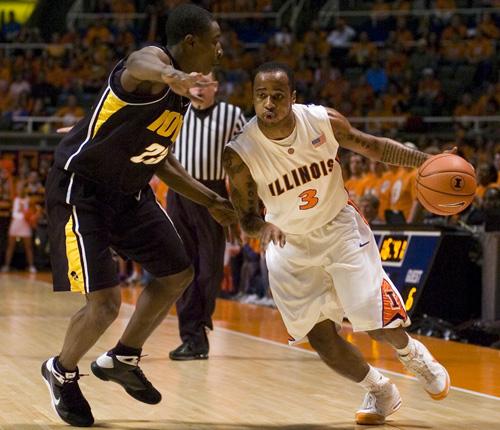 Chester Frazier dribbles to the basket in the game against Iowa on Feb. 1, 2009. Frazier recently agreed to return to Champaign as an assistant men’s basketball coach.

This offseason in college basketball was unprecedented for every team. With the one-time transfer rule in place, the portal exploded with kids from nearly every school.

Illinois fell victim to that, but few teams have undergone the assistant coaching turnover that has happened to Illinois’ over the past few weeks. After some speculation, Kentucky announced the hiring of two Illinois assistants: Orlando Antigua and Chin Coleman. There is current speculation that the third assistant coach, Stephen Gentry, may soon accept a position at Gonzaga.

What does this mean?

Losing an assistant in an offseason happens in college basketball, and when it’s to a blue blood school like Kentucky, that softens the blow. But potentially losing all three in one offseason is a red flag that there may be some internal issues. Considering the success Illinois had last season, losing all three assistants would be somewhat mind-boggling.

There’s no sugarcoating it: Losing Antigua is a massive blow. The New York native has been crucial for Illinois in recruiting out east, including fellow New York native Kofi Cockburn. He also has been the lead recruiter on a handful of international players like Andre Curbelo, Andres Feliz and Alfonso Plummer.

Coleman is more replaceable, but he was Illinois’ in to the Chicago area. Coleman is a former coach with the Mac Irvin Fire, one of the area’s best Amateur Athletic Union programs. He was the lead recruiter for both Ayo Dosunmu and Adam Miller.

The hiring of Chester Frazier

While these Antigua and Coleman rumors were swirling, Underwood worked swiftly to fill one of the spots. He hired former Illinois guard Chester Frazier. After a short professional career, Frazier spent seven years as an assistant at Kansas State before coaching at Virginia Tech as an associate head coach for three seasons. He doesn’t have nearly the track record in recruiting that Coleman and Antigua do, but his days as a player should be crucial for development.

Gentry has been an Xs and Os coach the past few seasons for Illinois, so if he leaves, I see Geoff Alexander as a good fit. Alexander has spent the past four seasons on the Illinois staff as the assistant to the head coach. He has familiarity with Underwood’s system, which would make up for the loss of Gentry’s smarts.

With the last assistant spot, Underwood needs a splashy recruiting hire, someone who has had success bringing in top-notch players. Two names to monitor are Florida assistant coach Al Pinkins and UConn assistant coach Kimani Young. They would be a step down from Antigua from a recruiting standpoint, but they should still be able to land guys with Illinois’ up-and-coming group in place.

Ultimately, losing three assistant coaches is a bad sign, but this by no means is the end of Illinois basketball. Though Coleman and Antigua led the recruitment processes of a handful of players on the roster, it doesn’t look like any more key players or incoming recruits will follow them out of the door. There’s a solid nucleus in place without Cockburn returning, and if the Jamaica native does opt to return for a third season, Illinois should be a threat in the Big Ten once again.