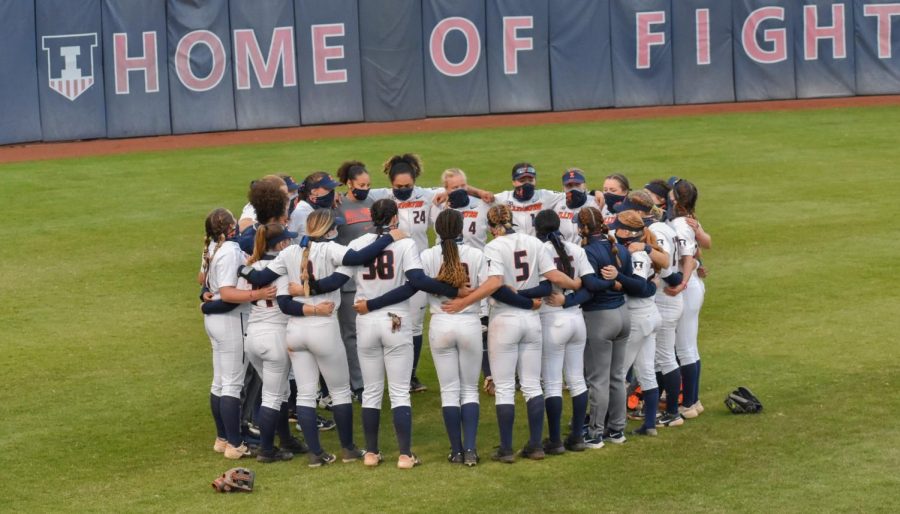 The Illini softball team huddles around after their game against Purdue on April 16. The team’s regular season has now come to an end.

Illinois softball’s “no-fear mentality” and perseverance took them far as they strove to overcome any obstacle in their path and finished their regular season with an overall record of 24-20. This weekend, the Illini went 1-3 during the four-game series against the Hawkeyes away at Iowa.

“It was frustrating knowing that we have the talent and the ability to make it to the postseason tournament,” said sophomore Kelly Ryono. “I feel like we definitely could’ve ended up higher than we did in the Big Ten itself, but still ending over .500 is a good accomplishment.”

The Illini ended the season with a winning record and finished with a .545 win percentage. As they worked on having quality at-bats and keeping that percentage over .500, the team continues to bind into the family aspect of Illini softball culture and grow their mental side of the game.

“Team chemistry is something that you cannot practice,” Ryono said. “So just being able to have that is a big advantage to us.”

Friday evening’s series-opener saw Illinois drop to Iowa 3-1. Junior Sydney Sickels started in the circle, while freshman Jaelyn Vickery led the Illini at the plate, going 1-for-3 with a run batted in.

Held scoreless until the top of the fourth, Illinois’ offense was set in motion by senior Bella Loya, hitting her ninth double of the season. Vickery then followed with a two-out RBI single to propel the first and only Illini run across home plate to get them on the board 3-1.

Saturday’s doubleheader was split by Iowa as Illinois fell in game one, 7-2, but took game two, 9-1. Led by junior Kailee Powell, who hit her team-high fifth home run of the season, the Illini offense was on fire during game two; along with their defense, where Sickels pitched up her 14th win of the season. She threw another complete game, allowing just one run while striking out eight.

Freshman Tori McQueen entered to pitch for junior Addy Jarvis in the sixth inning. Jarvis threw 5.0 innings, striking out three and allowing four runs. Iowa hung on as they added another three runs in the sixth inning to take a 7-2 lead on a two-out, bases-clearing triple.

Game two of the doubleheader allowed the Illini to regain their offensive momentum. Junior Avery Steiner laid down the first hit of the game in the top of the fourth inning, while going 1-for-4 with three runs scored and an RBI. Powell followed, going 1-for-3 with two runs scored on her team-leading fifth home run of the season and an RBI. Vickery contributed to putting numbers on the board as she went 1-for-4 with one run scored and an RBI, along with freshman Breana Shorter, who went 1-for-1 and a run scored.

The Illini dropped the final Big Ten game of the season on Sunday, 4-3. Sickels started in the circle for the Orange and Blue, while Rummell led Illinois offensively, going 2-for-4 with an RBI.

Once again, Illinois bats came out swinging as they scored in the top of the first taking a 1-0 lead. Steiner, who went 1-for-3 with one run scored, gave the Illini an early one-run lead, with a sacrifice bunt followed by an error on the Hawkeye catcher. Iowa responded in the bottom of the first with a two-out, two-RBI single to take a 2-1 lead.

Powell, going 1-for-2 with one run scored and an RBI, and Rummell both notched an RBI single getting two runs and taking the lead back for the Orange and Blue in the top of the third. Yet, in the bottom of the fourth, Iowa took the lead back on a two-run home run, putting the Hawkeyes ahead, 4-3.

Jarvis came in to pitch with two outs in the fourth inning, replacing Sickels, who threw 3.2 innings, giving up four runs and striking out two. Jarvis went 2.1 innings, giving up no runs and no hits; however, the Illini were unable to take the game and ultimately ended up falling to the Hawkeyes in the series finale.

Though Illinois softball dropped to a ranking of seventh in the Big Ten, their competitive excellence continued to be conspicuous. The Illini are top three in the Big Ten in batting average and hits, .277. They have seven Big Ten series wins on their belt, three of which were over top-25 teams and five were over projected NCAA tournament teams. Illinois was the only team to take a series win from the Big Ten champion, Michigan, beating two of the nation’s top ERA leaders: sophomore Alex Storako and senior Meghan Beaubien.

This is just the beginning for Illinois softball. As they ended the season with great accomplishments, the Illini are set to take all that they’ve learned, practiced and achieved and put it toward this upcoming preseason.

“I know one (goal) for sure is continuing to build the mental side of the game, softball IQ and confidence,” Ryono said. “That’s a big difference maker that sets teams apart at this level. We have amazing team chemistry this year, and to be able to put and carry that into next year as well gives us a big leg up over everybody else.”