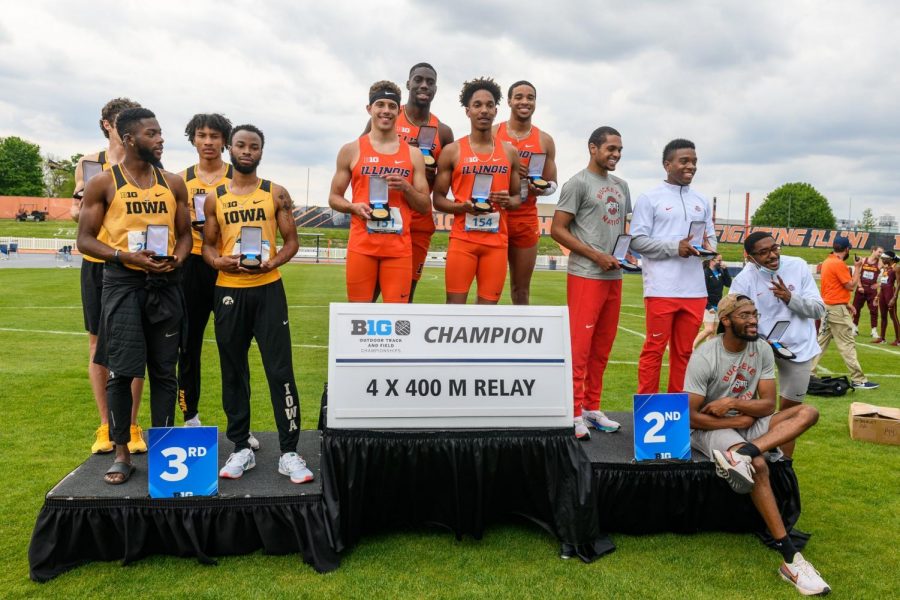 Robert Williams, Jason Thormo, Aman Thornton, and Kashief King stand on a podium with their 4×400 men’s relay awards on Sunday at Demirjian Park. The Illinois men’s and women’s track and field teams set many personal records at the Big Ten Outdoor Championships.

After this past weekend’s Big Ten Championships at Demirjian Park, the Illini now have another two-week break before touching the track again. This past weekend, Illinois hosted the Big Ten Outdoor Championships, and it was the first all-outdoor events since 2019 after last year’s championships were canceled due to the coronavirus pandemic.

Everyone has spoken about the effects of COVID-19 and how it has negatively impacted everyone’s lives. But it gave Illinois the mindset and motivation to train even harder for all outdoor events, though there was not a guarantee the season would reopen any time soon.

Illinois has won several events at every invitational this year, and the Big Ten Outdoor Championships were no different. Illinois may not have won the entire meet, but the Illini had multiple first-place finishes and broken school records.

“I am happy with my performance this weekend, as well as the team, because everyone gives it their all, and we came away with some wins including my own,” Jon Davis said. “This is what everyone on this team works for, so we can win and have fun doing so. I am enormously proud of how I performed, and I know I need to work on some things.”

Davis has had a positive mindset about his own performance and the team’s performance because they compete above and beyond their own abilities. In doing so, the men’s team finished in eighth place with 58 points, while the women’s team got 11th place with 31 points.

Though athletes compete to win and be in first place, winning is not everything, as Illinois had multiple school and personal records broken every day of the tournament.

Wells became just the sixth athlete in Big Ten history to win both the high jump and long jump events in the championships, while Davis and Howell are the first male and female athletes from the same school to win the 1500-meter since 2007.

With another two-week break before the NCAA Prelims in two weeks and the NCAA Championship in three weeks, the Illini will have another chance to make history and show what they have worked on all season.