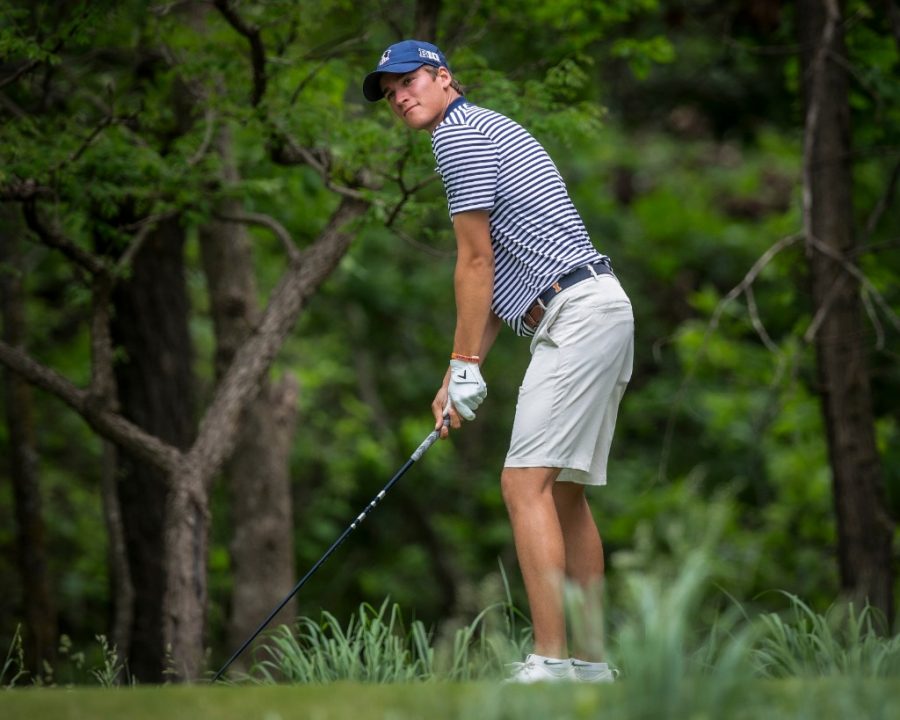 The Illinois men’s golf team had another successful season: It won the Big Ten Championship title for the sixth straight season and clinched a NCAA Championship berth earlier this week. When the All-Conference teams were announced, the Illini had a conference-leading total.

Junior Adrien Dumont de Chassart was named Co-Big Ten Golfer of the Year, along with Iowa’s Alex Schaake, and was unanimously voted as an All-Big Ten First-Team member.

Dumont de Chassart finished the conference season with three top-five finishes and was the Illini’s top finisher in three events this year. Dumont de Chassart recorded his best finish at the Big Ten Championship, where he placed second, leading the Illini to their sixth straight Big Ten title.

“My main goal is to play well, to be consistent, because the last few years, I’ve had some great tournaments, but I wasn’t really consistent,” Dumont de Chassart said. “So that was one of my main goals for the semester. I guess that was one of the main reasons why I got co-champion of the year. It’s nice to get the award, but there’s two tournaments ahead of us, so you’ve gotta focus on this and now be ready for what’s to come.”

Dumont de Chassart became the first Illinois golfer to receive the Big Ten’s top award since Nick Hardy won it in 2018. Chassart was named to the All-Big Ten Second Team his freshman year.

Additionally, Dumont de Chassart was selected to play on Team International at the Arnold Palmer Cup.

“That was one of my goals in the beginning of the semester to get selected,” Dumont de Chassart said. “I’m just looking forward to playing with friends of mine. It’s going to be a great experience.”

This is the fifth All-Big Ten First-Team selection for Feagles in his five years at Illinois, a record that likely will never be broken. Feagles also led the team in stroke average for the season and finished in a tie with Dumont de Chassart for the most team-leading finishes this season with three.

Feagles has been the most constant promoter of the “standard” other than head coach Mike Small himself. After the Illini’s Big Ten Championship win, he talked about failing to reach their standard.

“You know, we didn’t have our best stuff,” Feagles said. “You could ask anyone on this team. We didn’t hit our standard I don’t think any day. Props to Iowa. They brought it; that team’s got some good players.”

Feagles said that winning despite not hitting the standard was “a big confidence booster” for the team. To win a regional championship or national championship, however, they will need to reach that mark.

Ji received the second All-Conference selection of his career after being named to the second team his freshman year. The First-Team All-Big Ten selection comes as no surprise for the sophomore, who broke several records at the Louisiana Classics earlier this season.

Ji finished with three top-five finishes on the season, including his record-breaking victory in Louisiana. Ji has proved himself to be farther along in his development than many expected.

“Jerry is learning to play the game holistically, not such statically or analytically,” Small said. “He’s a perfectionist … He’s got to relax, and he’s got to compete. He can run hot; he can run really hot, (and) you wouldn’t see it on him. You’d think he’s just kind of lollygagging around, but he’s running hot inside and he’s mean to himself.”

Small says though Ji has made a lot of improvements, he still has a long way to go.

“He’s really only on his first year, so a lot of development to go,” Small said.

Ji’s work on his mental game has been very important to his success this year.

“There’s still so much I’ve needed to learn,” Ji said. “It’s still very early in my career. And last year, I only got to spend half a semester with the team.”

In his condensed first two years, Ji has set records and collected several accolades to add to his long list of achievements started years ago in the Netherlands.

“In the end, it’s all about the last last box in the scorecard,” Ji said, “And if it’s here or in Europe, it’s all the same.”

Going into the most important part of the season, the Illini haven’t made excuses, and they haven’t hinted at any feelings of complacency.

“If you get a little bit carefree or a little bit scared or protective, it can eat you up,” Small said. “So I don’t know what the score is gonna be like. I don’t know if they’re going to prepare the course like they did for (last) nationals or if it’s going to be less severe. I don’t know. We’ll be prepared for wherever this goes.”

Small’s sentiment is shared by the players. Small has built the program with that idea in mind, and his players live by it. This team never gets too high or too low. Whether coming off a big win or a disappointing loss, they focus on if they met the “standard.”

“They live under the mantra if you’re not happy with it, play better,” Small said.

Most times this season they’ve been happy. The Illini have won six of their 10 events leading up to the National Championship in Scottsdale, Arizona, but they are not satisfied.

“Our mindset has just totally been — throughout the year, throughout my time here — has always been just next,” Feagles said. “We just got to move on to the next thing.”