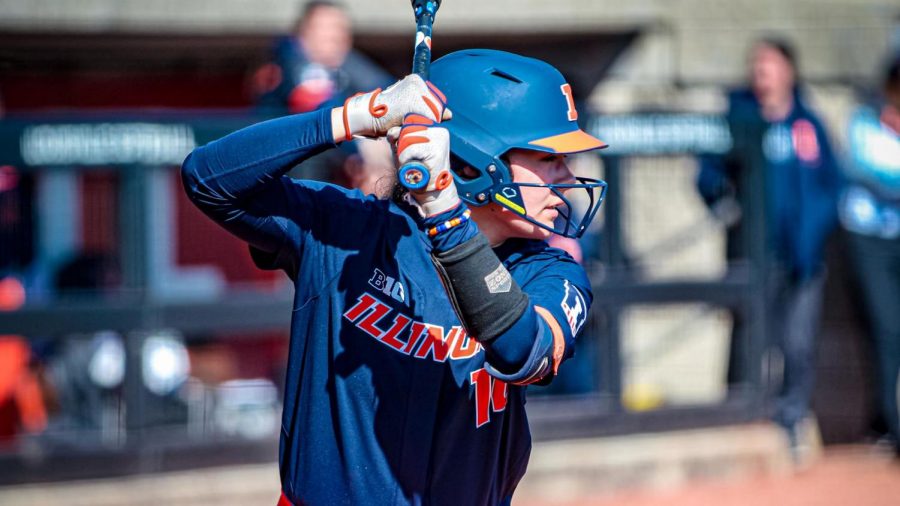 Sophomore Kelly Ryono prepares to bat during a game. Ryono hit her first career home run in a game against Ohio State on May 8.

Over the last two years of playing for the Illini, sophomore outfielder Kelly Ryono has manifested putting mind over matter. By embracing the grind and taking advantage of every moment, Ryono has expanded upon her mental capabilities and increased her confidence to better her offensive tactics.

With her coaches and teammates as her on-campus support system, Ryono adjusted to the new environment of college sports. Different from high school, where each teammate lived their separate lives aside from practices and games, college is about functioning as a unit.

“One huge thing (that I’ve learned while playing at Illinois) is how to rely on my teammates,” Ryono said. “These girls are people who you live with and are around for hours and hours every single day. (It’s important to) learn how to work with them and love them as your family, but also get a job done on the field. That’s what college sports is all about: is building that connection as a team and making those relationships that you’ll have for the rest of your life.”

During her time in Champaign-Urbana, Ryono and the Illini haven’t taken anything for granted. As a result of the 2019 season being cut short by COVID-19, this preseason was strictly about getting into a mental zone so the physical aspect of softball would follow. With more time and fewer breaks, the players got into the routine of online school and then heading straight to practice. Ryono, and the Illini as a team, were able to bind cohesively with one another and collaborate during preseason practices.

Softball is a mental game, and without that complete presence of mind, self-assurance can be lost. Through her years of playing, Ryono came across mental challenges that were holding her back from her offensive abilities. She mentions being a “big thinker,” where overthinking got the best of her and, at times, would hinder her performance.

“(A definite challenge is that) college softball is the best of the best,” Ryono said. “You’re facing pitchers that know everything about you. (From the scouting report), they know what to pitch to get you out. Definitely from last year to this year, I’ve learned that and grown as a hitter. Once that one thing clicked, things started looking up again.”

On May 8, the Huntington Beach, California native hit her first career home run in a game against Ohio State. The offensive tactics that tied into her impressive hit were previous at-bats and stepping up to the plate with confidence. Her year-round hard work and perseverance made a moment like this worth the wait.

“I didn’t even know what to do with myself; I was smiling so hard my cheeks hurt,” Ryono said. “Just building off my at-bats and really seeing the ball into the zone is what really helped me. The day before was my first at-bat against the second Ohio State pitcher. In previous at-bats against her, she had thrown me a middle-in pitch that I had popped up. Hearing from the other girls, she was basically just working what she was doing (the day before), so I was like, ‘If she throws me this same pitch again, I’m gonna sit on it, swing high and unload.’”

Ryono was able to tackle personal hardships with the help and support from her team. As a cohesive unit, she was able to push through mental and physical trials and errors, reflect on periods that were mentally draining and overcome psychological obstacles. Her coaches called it the “J curve,” where there is a nadir period of personal challenges before growing success.

Whether you’re ready for it or not, life moves quickly, so it is imperative to make the most out of each moment with effort, skill and courage. To successfully carry this out, having that motivational drive is crucial. From the 2020 to 2021 seasons, Ryono’s batting percentage increased from .178 to .270. Ryono finds this motivation in her passion for the game, fueled by her younger self.

“I think about myself when I was eight years old; how this is literally what I’ve always wanted to do, and what I’ve worked my entire life for, and now I’m here doing it,” Ryono said. “My biggest motivating factor is just reminding myself to stay grateful, and how it’s such a blessing that I get to do this.”

Through her motivations and experiences, Ryono’s first home run exhibited her physical and mental offensive success. She persisted against her self-doubts and embraced the grind toward successful progression. As Ryono climbs the “J curve,” she is prepared to surpass her previous endeavors in achieving upcoming goals.

Ryono is set to continue improving her physical abilities while enhancing her mental capabilities. Through reading books and watching YouTube videos, her number one thing on the summer to-do list is to grow mentally with an emphasis on self-confidence. She strives to be better than she was the day before.

“(If I could go back in time, I would tell my younger self that) everything happens for a reason,” Ryono said. “Keep working hard, putting 100% into what you do and believing in what you’re doing, and everything is going to work out. The mental side of this game is what sets good apart from great.”