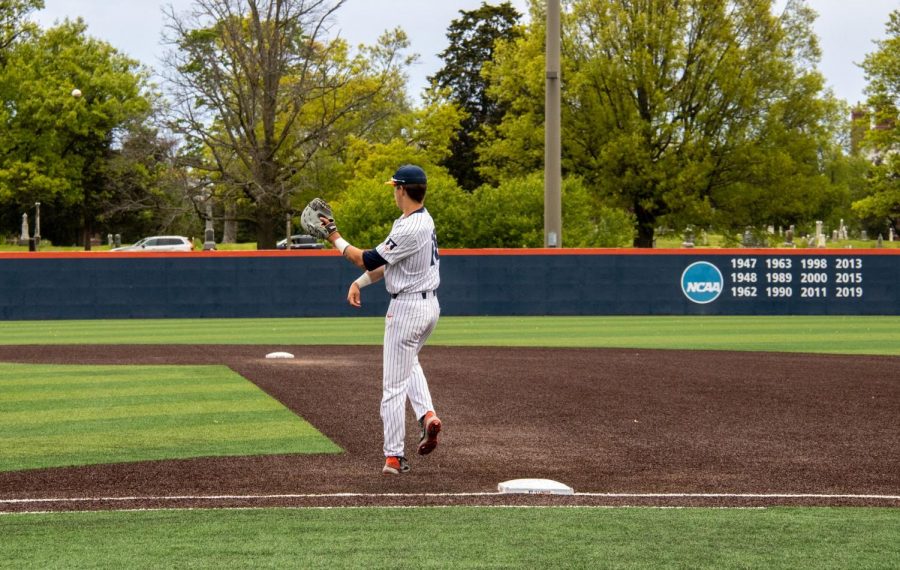 Junior Kellen Sarver catches the baseball at first base against Maryland May 7. Sarver says the team will strike first like they have been for their game against Rutger May 28.

In his fourth season with the Illini, Kellen Sarver is more than acclimated to the emotions the end of a season brings. This week, the Illini prepared for their final series of the season against Rutgers with their remaining practices of the season.

“We know this week was going to be our last week of practices together, but we didn’t let that type of mindset affect the way we practice and go about our business this weekend,” Sarver said.

The first baseman helped propel the Illini (21-20) above .500 last week after being named Co-Big Ten Player of the Week, sharing the award with Michigan State’s Bailey Peterson.

Throughout his time in the Big Ten, Sarver has watched friends and teammates walk away with the award. He remembers Bren Spillane winning the award multiple times in a row. He now has achieved his goal of earning the honor for himself.

In last weekend’s three-game series against the Nittany Lions, Sarver went 6-for-12, adding two doubles, three home runs, seven runs batted in and six runs scored. He joins teammate Jackson Raper as the only two Illini to have multi-homer games this season.

Sarver has been excellent since mid-April, ranking second on the team in home runs (7) and RBIs (32). In his last 21 games, the first baseman is hitting (.346) while adding at least one RBI in 14 of those 21 games.

The Champaign native gives some credit to playing “MLB: The Show” on Xbox before the weekend, helping him with pitch recognition.

“I played that all week and going into the weekend,” Sarver said. “I felt like I was seeing the baseball a little bit better. I was able to watch it all the way through the strike zone and have pretty good control of my barrel.”

Both Rutgers and Illinois boast players ranking in the top five in the conference in batting average and home runs. Raper (12) ranks fourth in home runs, with Rutgers’ Ryan Lasko sitting just one below (11). Despite going 1-for-9 last weekend, Justin Janas remains the conference’s batting average leader. Mike Nyisztor of the Scarlet Knights ranks third (.354).

The Illini will start their typical starting rotation of Andrew Hoffmann, Nathan Lavender and Riley Gowens. Lavender continues to hold his place in the top five for wins – in a four-way tie for second (6) – this year. Lavender holds the fifth-best ERA (2.89) in the conference.

In possibly the most important series of the season, the Illini will need to remain above .500 after the three-game series to be granted entry into the NCAA Regionals that start June 1.

Sarver says the Illini will look to strike first as they always have this season.

They will face off against the Scarlet Knights on Friday at 10 a.m., Saturday at noon and ending with the series decider on Sunday at 11 a.m. central time. All three games can be streamed on Big Ten Network+.