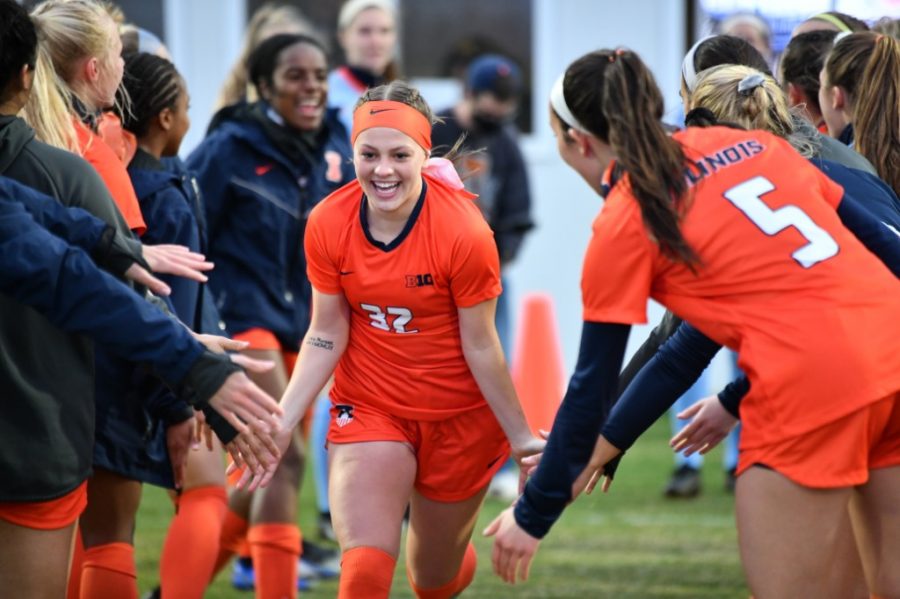 Freshman Kennedy Berschel runs through a tunnel of teammates before the game against Iowa April 8. Illinois soccer released its 2021 fall schedule featuring non-conference and of course conference games reminiscent of seasons played prior to the pandemic.

On Thursday afternoon Illinois soccer released its 2021 schedule for the upcoming fall season. Full of exhibitions, non-conference and of course conference games, it’s reminiscent of the last time Illinois had a normal soccer season.

Illinois finished their 2020 spring season with a record of 6-5-1 and ended tied fifth with Indiana. In post-season play, the Illini saw their dreams of winning the Big Ten tournament slip away in the first round after losing to the Hawkeyes to a golden goal in overtime.

The Illini will open their season with two exhibition games at home in Champaign against Eastern Illinois University on Aug. 8 and Notre Dame on Aug. 14.

Following the two matches they will begin the slate of non-conference opponents on Aug. 19 in a Braggin’ Rights match up against University of Missouri. Following Mizzou, Illinois won’t be traveling that far from home to face off against Illinois State University.

After being on the road, Illinois will travel back and host three straight games at Demirjian Park. First off will be the most anticipated game for head coach Janet Rayfield as Illinois will face off against North Carolina on Aug. 26. The Tar Heels, led by long time coach Anson Dorrance, most recently finished their campaign in the NCAA Tournament after getting knocked out by Santa Clara University in the semi-finals.

The match against North Carolina will reunite Rayfield with her Alma Mater and former college coach Dorrance.

Then on Aug. 29, Illinois will go head to head against Butler University and close out their non-conference home games on Sept. 2 against Xavier University.

Finishing off the non-conference matches will include two games in Ohio against Bowling Green State University on Sept. 9 and The University of Toledo on Sept. 12.

To start off the 10-game conference campaign Illinois will travel to Ann Arbor to play Michigan on Sept. 19. A couple days later on Sept. 23, Illinois will welcome Purdue for the first conference home game of the season. On Sept. 26, the Illini will travel on the road once again to visit Indiana in Bloomington.

For the next three games the Illini will be staying in Illinois. On Sept. 30, Illinois will be traveling up to Evanston for an in-state showdown against Northwestern. This past season saw the Illini take the win after a goal from Kendra Pasquale in the last two minutes of the game.

On Oct. 3, Illinois will face off against Maryland and then six days later on Oct. 9 will be a match against Wisconsin, both taking place in Champaign.

Closing out the games on the road will be Minnesota on Oct. 14 and Oct. 17 against Iowa. To finish off the regular season, Illinois will be playing at home hosting Nebraska on Oct. 21 and Rutgers on Oct. 24.