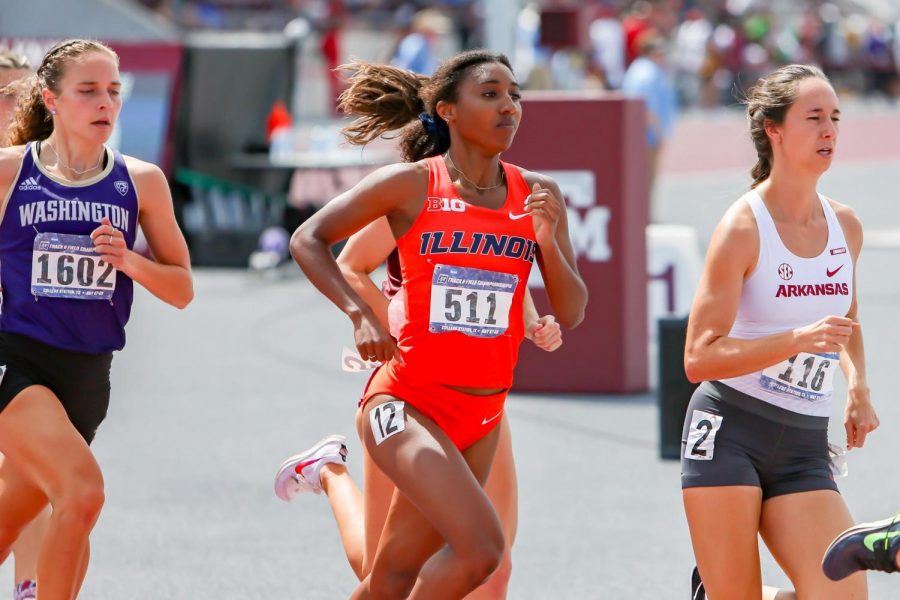 Sophomore Olivia Howell runs in the women’s 1500 meter at the NCAA West Prelims in late May at College Station, Texas. Three Illini received All-America honors including Howell, at the NCAA Outdoor Championships this past weekend in Eugene, Oregon.

The weather had plans for something other than the NCAA West Prelims in College Station, Texas because the tournament activities on Friday had to be postponed due to the lightning and rain, causing multiple events to be pushed to Saturday.

But that didn’t affect the Illini, as they saw multiple school records broken and had three individuals earn spots in Eugene, Oregon for next week’s NCAA Outdoor Championships.

“We have trained hard at every practice to win at these tournaments and be the best version of ourselves,” said Jonathan Wells.

In 2019, the Illini women’s track & field team had no one qualify for the next round, so this week’s tournament was time for them to answer the question of how good they really are. Olivia Howell did just that, breaking her personal best in the 1500-meter run with a seventh place finish with time of 4:12:45 and earning her a spot in Eugene. She isn’t the only Illinois representative heading to Oregon, as Wells and Manning Plater will both have another shot at proving if they are the best of the best.

The entire four-day period was historic for the Illini because members of the team broke records every day, and multiple members continued to advance into the next round. The women’s 4×100 relay race was the final event for the Illini, who finished with a season-best 3:38.96.

“The Championships is what it is all about,” said coach Jacob Cohen. “There is non doubt in my mind that everyone wants to do their best there. However, I care about athletes having fun and bettering themselves, which is why I am happy about everyone’s performances today because we know what we need to work on for next season.”

Allison McGrath ended the season holding the best time in her event at the Big Ten Championships. Amira Aduma and Jessica McDowell both ran to the best of their abilities, finishing off their last events of the season. McDowell finished her season with the fifth-fastest runner in Illinois history. Ayah Aldadah set a new personal record in the steeplechase with a time of 10:17.63 to place 21st in the Midwest region.

June 9 is the day the NCAA Championships begin, which means the Illini have another long break before their last meet of the season.