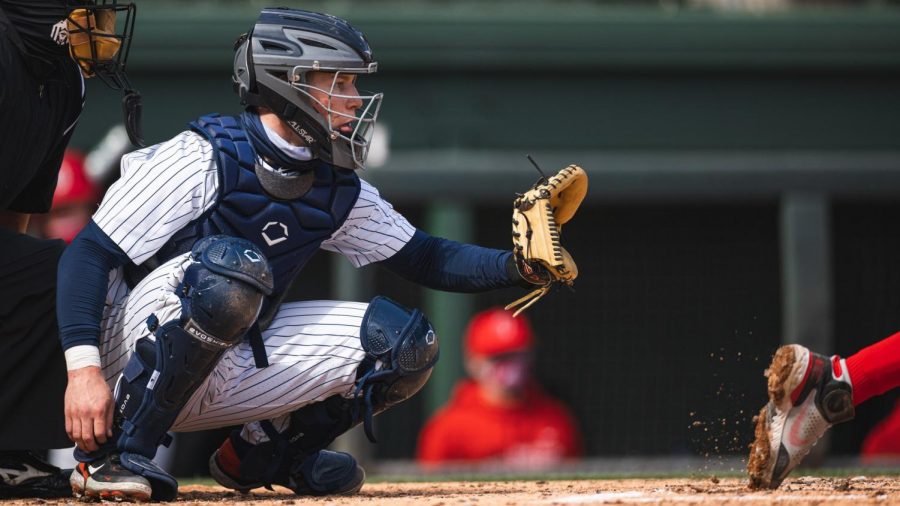 Junior Jacob Campbell holds his mitt up to catch a ball during a game. Campbell was the leading force in the Illini’s dominant offensive performance this weekend despite losing to Rutgers in the final series of the season.

The Illinois baseball team’s season came to a close this weekend after the Illini went 1-2 in Piscataway, New Jersey against Rutgers.

After trailing 1-0, the Illini got on the board in the top of the seventh courtesy of an RBI single by Cal Hejza that drove in Cam McDonald for the tying run.

The Scarlet Knights capitalized off the Illini’s pitching change in the next frame, scoring on a pair of two-out doubles, one off Hoffman and the following off Ty Rybarcyzk.

Illinois was able to tie the contest in the top of the eighth following a sacrifice fly by Justin Janas that scored Jackson Raper, who finished with the best batting average on the team (.391). However, a bases-loaded sacrifice fly by Rutgers’ Jordan Sweeney put the game away for good at 3-2.

Game one of the doubleheader saw the Illini storm out of the gates early after Jackson Raper hit a solo home run on the second pitch of the afternoon, his 13th of the season.

Jacob Campbell (3-for-4, one double, one home run, career-high five RBIs, two runs) was the leading force in the Illini’s dominant offensive performance, securing a double in the second, a bases-loaded two-run single in the third and a three-run homer in the sixth.

Nate Lavender (6.0 innings, two hits, one run, one walk, 10 strikeouts) was superb and picked up his seventh win of the season (7-2), throwing for his second career double-digit strikeout game (10). The southpaw allowed just two hits and one run, which came in the fourth inning.

The Illini dropped game two of their doubleheader on Saturday, 6-3, after building a two-run lead in the second inning. The Scarlet Knights came roaring back the following frame to take the lead for good following three runs.

Campbell would try to assert the same magic he provided the day prior with his second home run of the day – narrowing the deficit to 4-3 – but that was as close as the Illini would come.

The Illini finish with a 22-22 record, making this the 15th of 16 seasons under head coach Dan Hartleb in which the program has completed a season above .500.

The Illini’s run production this season was quite impressive after a bumpy first 12 games that only saw four runs scored. The team scored at least six runs in 18 of their 22 wins this year.