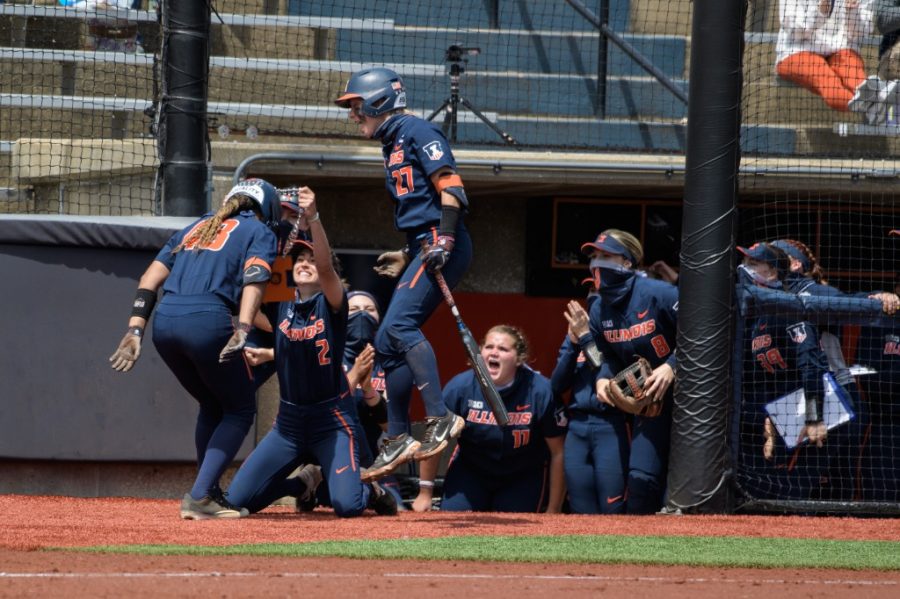 Illinois softball players celebrate Jaelyn Vickery during the game against Ohio State May 8. The team reflects on a successful season with multiple accolades amidst the pandemic.

The well-rounded Illinois softball team ended the season with a winning record, 24-20, improving upon its 11-11 campaign cut short by COVID-19 in 2020. The Illini also ended top three in the Big Ten in batting average (.277) and hits (324), were the only team to take a series win from Big Ten champion Michigan and landed four individual players on All-Big Ten teams.

All in all, Illinois made its mark this season despite all the obvious obstacles. In the midst of COVID-19, the Illini accomplished one of their overall goals: putting Illinois softball back on the map in the Big Ten and in the country.

“(We were able to) make people scared to play us and know that we’re a big deal,” said junior Avrey Steiner, who finished with the joint-fifth-most hits in the Big Ten. “We came out swinging, and they’re not going to have an easy game when they play us. I’m really proud of that, and I think we did that overall.”

Illinois has an abundance of talent and skill, but being a young team, for many players this was their first Big Ten season. Several team members were essentially penalized twice, with COVID-19 causing the 2020 season to be cut short and not being able to play a regular season this year despite knowing other teams outside the Big Ten were. Transitioning from a shortened season, however, the Illini were able to play all 44 scheduled Big Ten games.

The season opened with a 12-game series against five teams: Rutgers (2-0 series win), Maryland (1-1 series split), Michigan (2-0 series win), Michigan State (2-1 series win) and Penn State (3-0 series win) at Sleepy Hollow Sports Complex in Leesburg, Florida. With a strong start to the season, ending the first two weekends with an overall record of 10-2 and leading the conference with a .300 team batting average, the Illini came into this unusual season hot and hungry.

Maybe the warmth of the Sunshine State allowed individual players like junior pitcher Sydney Sickels to flourish and set personal standards. She threw a complete game win against Michigan State March 11, recording 11 strikeouts, no walks and no earned runs in game one.

March 13 against Penn State was no different. Sickels tossed a no-hitter, throwing the 14th no-hitter in Illini softball program history. She did this all while pitching a complete game, striking out 10 batters, allowing one run and walking none.

Her dominant weekend in Florida culminated with Big Ten Pitcher of the Week honors March 16; she went 3-0 with a 0.00 ERA in 21 innings pitched, recorded 31 strikeouts without allowing a single walk and threw back-to-back one-hit, 10 strikeouts games.

Sickels continued to excel as the season progressed. She threw two complete-game shutouts against Wisconsin April 2 and April 4, recording 12 strikeouts in both appearances and throwing a one-hitter in the latter matchup.

For these performances, Sickels received her second Big Ten Pitcher of the Week honors, going on to finish the series against Wisconsin with no earned runs and 24 strikeouts, allowing only six hits and three walks in 14.0 innings pitched.

“The beginning portion was so crucial, just getting wins over ranked teams and showing out when we went to Florida,” Steiner said. “It was just kind of a huge success that kept us going when we got into the home series. I feel really confident in our talent and how we do. We just have to capitalize (on it) a little bit more.”

There was no blueprint to follow for the mental and physical intensity of this conference-only season. Rather than playing three-game series as they do in a traditional season, an additional game was added to each series. Through the 10-week season, individual perseverance and support from team members drove the Illini to continue striving toward success.

As the team persisted, the coaches and players were very cognizant of COVID-19, as well as prevalent societal issues around race and equity. The Illini strove to find balance between the pandemic, personal life, softball and social justice issues that were taking place at the time, including the Black Lives Matter movement.

“This year we had a huge social justice component, from the equality stickers on the helmets that the team designed to a social justice seminar held twice a month by Katie Wingerter and Danielle Davis,” said head coach Tyra Perry. “They presented in different areas and did a lot of work with PowerPoint and TED Talks. They just cared about the team and what’s going on in the world. It wasn’t a political message, just historical and factual. All very informative and well done, I’m proud of their work.”

With players showing awareness, intellect and leadership both on and off the field, they received a well-rounded experience using softball as an outlet. Their primary focus was on mental health and mental training, such as composure and optimal performance. Through trials and tribulations, the Illini found strength, motivation and determination within each other as they took the field.

“We had moments of strength in all areas,” Perry said. “We spoke a lot on consistency and having each facet of our game show up every day.

“I thought we started out fairly strong and … then started to kind of lose our step a little bit toward the end. A lot of those losses at the end came from close range; we either lost a lead or we lost by one. We couldn’t quite get over the hump. There were a lot of factors that were under our control that we didn’t quite take care of in the end.”

Maybe so, but celebrations are still in order for this valiant team and its many standout players. Four Illini landed on the postseason All-Big Ten softball teams: junior Kailee Powell was named to the first team and All-Defensive defensive team, while Steiner, sophomore Delaney Rummell and redshirt freshman Jaelyn Vickery all earned Second-Team All-Big Ten honors. Vickery also was named to the All-Freshman Team, and junior Addy Jarvis was named the Illini’s Big Ten Sportsmanship Award recipient.

Powell’s offense also deserves mention; she started all 44 games, finished the season with a .328 batting average and scored a team-high 29 runs to go alongside a .550 slugging percentage and .409 on-base percentage. She also drove in 28 runs batted in while leading the team in extra base hits with 17. On defense, Powell finished the season with a .996 fielding percentage, committing just one error in 244 chances. She notched 235 putouts and eight assists while being a part of six double plays.

Rummell led the Illini in multiple offensive categories during the season, starting all 44 games at third base. On April 16-18, she went 9-for-12 with 10 RBIs, a home run, three doubles and two runs scored in four games against Purdue. She was named the Big Ten Co-Player of the Week and Louisville Slugger/NFCA Player of the Week for her performances. Rummell hit .314 this season, leading the Illini with 13 doubles and 33 runs batted in.

Steiner, taking the NFCA All-Region First-Team honors, finished the season with a team-best .329 batting average while starting all 44 contests at second base. Vickery also started all 44 games in center field for Illinois, hitting .306 in her first season in the Illini lineup. She finished with a .404 on-base percentage with 27 runs scored and a team-high 11 stolen bases.

“We believe that we can do it all,” Perry said. “We just have to continue to grow the game and increase our softball IQ. We have newcomers that are going to join us, so it’s going to be a fairly large group which is going to help create actual competition at each position. That’s gonna be a big plus for growth when everybody has to compete to gain and maintain a spot. You can’t rest, just know that you’re going to start.”

Players to watch next season are Rummell as an offensive threat, Steiner with her fiery and tough as nails personality, Powell with her high and upbeat energy, Vickery with her hot bat and great speed and power combination, Davis after being hurt this season and returning as a key performer, Sickels with her record-breaking performances and intense work ethic and Bella Loya, who will be returning for her fifth year.

Together, new and former players’ mindsets and abilities will form as a cohesive unit as they strive toward two goals: winning a Big Ten Championship and making it to NCAA regionals. Through consistency, perseverance and their “no-fear mentality,” Illinois’ motivation and determination should fuel their fire — and they expect to not skip a beat this upcoming season.

“I think we kind of played careful and hesitant at times, especially once it looked like we had a chance at being at the top of the conference,” Perry said. “At the beginning of the year, we were just playing hard and trying to win. Then toward the middle and end, we started playing under the weight of expectations, and I would hope to embrace those expectations and use them as fuel.

“I think maturity is going to help our mindset change for us to ‘Yeah, we’re supposed to be here,’ instead of ‘We’re trying to be here.’ I know that my players are aware and dedicated to working to become bigger, faster, stronger, more aggressive for 2022.”