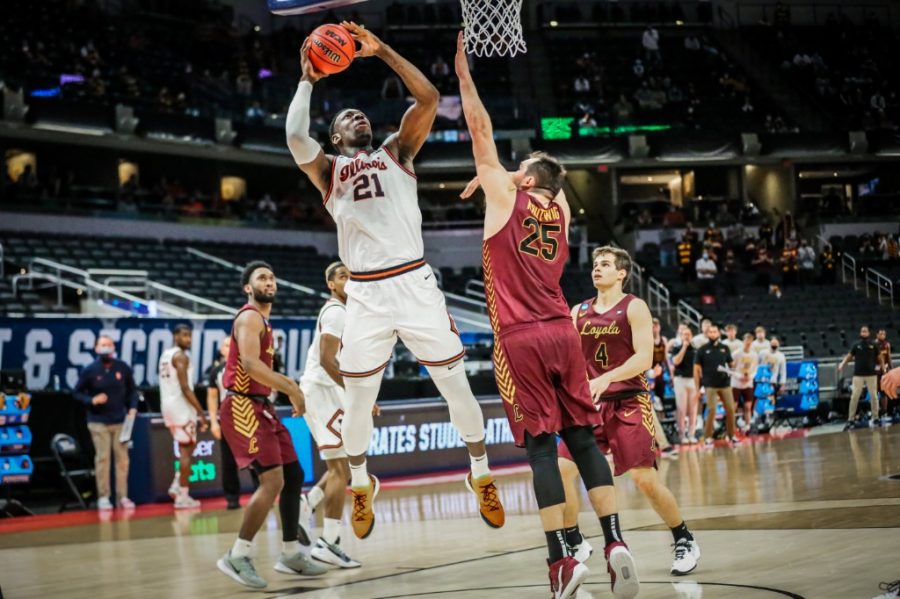 Junior Kofi Cockburn jumps to shoot a basket against a player from Loyola Chicago during the second round of the NCAA Tournament March 21. Illinois needs a top performing athlete to continue the basketball programs relevance.

Ayo Dosunmu didn’t have to come to Illinois. The former four-star prospect took a chance on his state’s flagship school, and the results — albeit a tough end — gave Illini fans hope that this could be an elite program.

Two NCAA tournament appearances if not for COVID-19. A Big Ten tournament title. Countless game-winning shots that slingshotted the Illini into Big Ten title contention. With Dosunmu heading off to the draft, it’s likely the Morgan Park alum will cement his status as an Illini legend with his name and number hanging up in the State Farm Center rafters. However, his success came with a huge sidekick: a dominant big man, which is something Illinois needs to replace to compete in the conference.

While Dosunmu got most of the accolades, Kofi Cockburn’s arrival to Champaign is what truly transformed Brad Underwood’s program, as his presence countered other Big Ten centers while becoming a dominant scorer his sophomore season.

Next season will have a different feel. The Illini can no longer rely on Dosunmu’s heroics. They’ve had to replace all three assistant coaches. With Cockburn mostly likely keeping his name in the NBA draft, the Illini will have a huge hole to fill, and they probably will need a transfer to fulfill the necessity if they want to have a peaceful and successful transition into the next stage of the Underwood era.

“It’s a little bit of a difficult spot,” Underwood said about his front court.

Prior to Cockburn’s arrival, the Illini had a weak front court, having to rely on Giorgi Bezhanishvili at the five to slow down the Luka Garzas of the college basketball world. While the scoring output was fine, the Illini defense was shredded by big men en route to a 12-21 finish. Lamar Stevens and Penn State tormented Underwood’s front court for years.

Cockburn was a game-changer, however, with the Illini win totals shooting up to 21 and 24, respectively, as the Jamacian native’s sheer size was able to neutralize some of the biggest scoring threats in the conference. While Cockburn doesn’t appear to be a tailor-made fit for today’s style of NBA play, his ability to block shots and take up space in the paint made him perfect for Underwood’s program to take the next level. Essentially a walking double-double, Cockburn was nearly unstoppable if he stayed away from foul trouble.

But what really improved during his sophomore campaign was his offensive efficiency. While his free throw percentage went down, his field goal percentage jumped 12 percentage points, with the seven-foot center regularly finishing the possession with highlight-reel dunks. His points per game also increased from 13.3 to 17.7 this past season.

But he’s gone, and who is going to replace that offensive production? With Dosunmu gone, logical answers exist regarding point replacement with Alfonso Plummer, a sharpshooting three-point guard, and Andre Curbelo on the team. But the big-man production faces a huge question mark, especially with Bezhanishvili departing for professional opportunities overseas.

Omar Payne definitely has the size and presence to slow down offenses. However, the Florida transfer has a poor track record regarding his ability to consistently provide the offensive production, as his career points-per-game average sits at just 3.8, though he did convert 75% of his attempts last season.

Coleman Hawkins shot under 50% from the field for Illinois last season, which is uncharacteristic of most successful bigs. While Hawkins does have more range than Cockburn — shooting 23% from behind the arc — it’s hard to imagine Hawkins being able to bully defenses down low for 15 points per game. Regardless, Underwood likes what the California sophomore brings to the roster.

“I’m expecting Coleman to have a fantastic year,” Underwood said. “Coleman is a guy who I see a huge jump coming, whether we play him at the four or the five.”

The fact is, you can’t replace Cockburn, but you can recreate him. Illinois has 17.7 points a game to make up for with the departure of Cockburn, and it’s unlikely another 285-pound athletic giant commits to play next season.

Guard play and the emergence of forwards such as Austin Hutcherson and Jacob Grandison can’t be overstated. Being able to successfully play the transfer portal and secure commitments from Tre Mitchell from UMass, a 6-foot-9 big that can spread the floor, or center Greg Lee from Western Michigan is vital.

In the Big Ten, competent front courts are what make conference contenders. Think about the Wisconsin teams with Frank Kaminsky. Think about Luka Garza at Iowa. Think about Penn State and Lamar Stevens, who lifted them from laughing stock to NCAA tournament quality.

Ayo Dosunmu was fantastic, and he deserves to be honored. But what truly elevated the Illini brand was the emergence of Cockburn. It’ll take a team effort next season, but Underwood needs to secure another big man if he truly wants to compete for the conference crown in 2022.