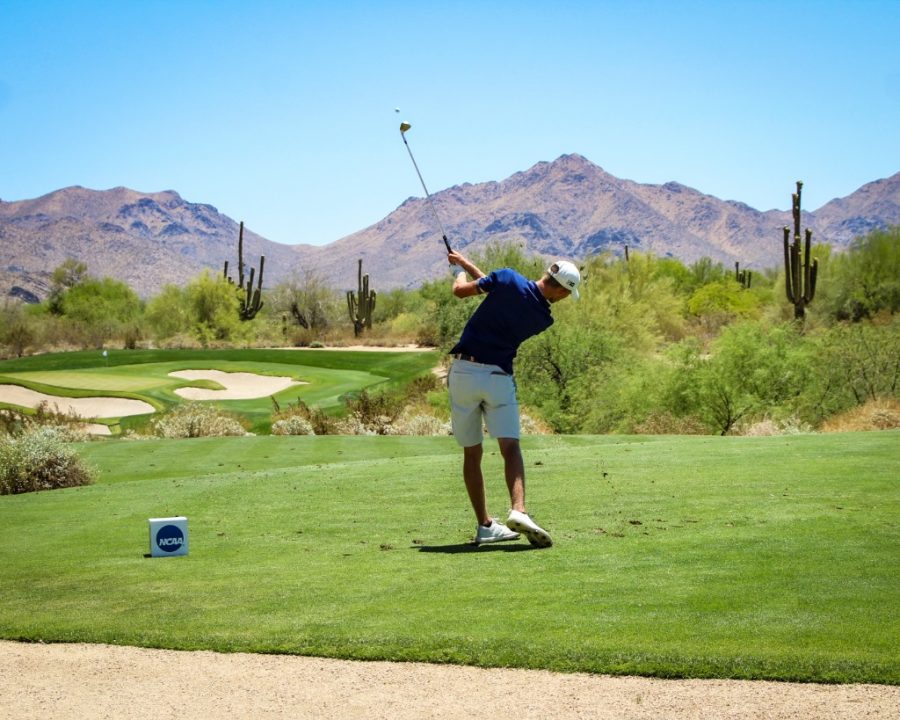 Fifth-year senior Michael Feagles hits the ball in the third round of play at the NCAA Championship in Scottsdale, Arizona. Illinois fell to Oklahoma in match play quarterfinals on Tuesday.

In 2019, the Illini entered the NCAA Championship in Fayetteville, Arkansas as the 24th-ranked team in the nation and coming off back-to-back wins at the Big Ten Championship and the NCAA Myrtle Beach Regional. Despite having momentum ahead of the biggest tournament of the season, the Illini struggled from the opening round, eventually shooting +51, finishing in 27th place and missing the 15-team cut after day three.

After a second-place finish in the Stillwater Regional, the Illini secured their 13th consecutive NCAA Championship berth, the second-longest streak in the country. Two years after the 2019 disappointment, Illinois headed to the Grayhawk Golf Club in Scottsdale, Arizona, looking to add some more silverware after winning the Big Ten Championship for the sixth straight season.

After ending day one tied for 10th and shooting 7-over-par, Illinois continued to climb the standings after rounds two and three, sitting tied for fifth after day two following a one-under-par outing.

Day three marked the team’s best performance, as the Illini shot two-under-par and secured a place in the top 15 after missing the cut in 2019 by 15 strokes.

The field of 30 teams was reduced to 15 after day three, and with only the top eight teams advancing to match play after round four, the Illini held on to fifth place and secured a match play quarterfinal showdown with four-seeded Oklahoma, the top-ranked team heading into the tournament.

After taking early leads in almost every match, the Illini faltered late and couldn’t recover, eventually falling to the Sooners, 3-2.

“We were ready to go today,” said head coach Mike Small. “We were one up in four of the five matches after the first hole. … In the middle of the round, we got a little bit out of sorts, but that happens. In match play, you can’t hide.”

The two wins came in dominant fashion from Dumont de Chassart (8&6) and Feagles (4&3), while Ji and junior Tommy Kuhl hung on in their matches until the very end, ultimately falling on the 17th hole.

The loss marks the end of Feagles and Tadiotto’s time in Champaign after five years, with Feagles’ fourth-place finish in his hometown marking his final appearance in an Illinois uniform.

Despite falling in the quarterfinals, the match play appearance was the Illini’s first since 2017, when it fell to the Sooners in the semifinals.