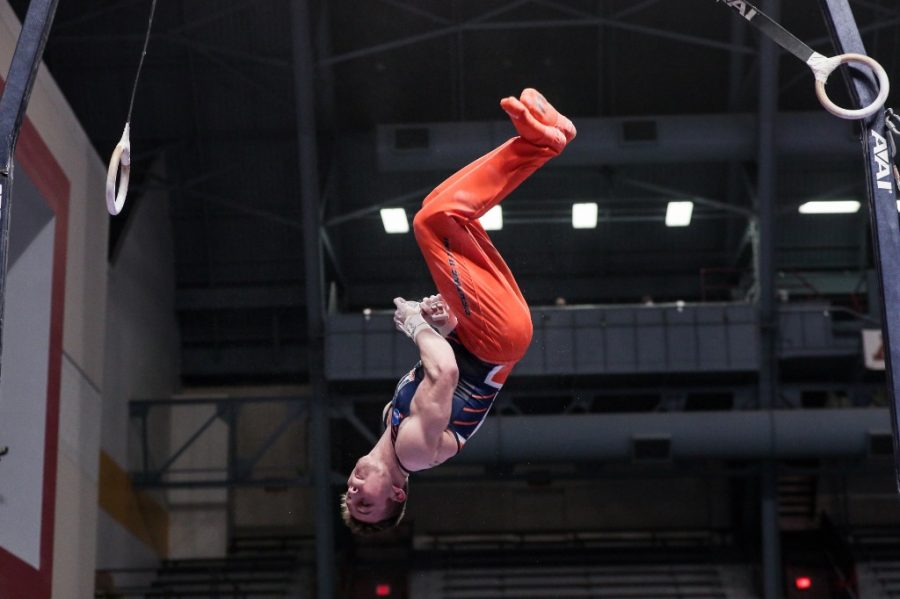 Junior Michael Fletcher dismounts from the still rings at the NCAA Championships on April 17. Fletcher, along with Illinois alumni Michael Paradise and Alex Diab, will be competing in Fort Worth, Texas, at the U.S. Gymnastics Championships.

Three current and former Illini gymnasts — rising senior Michael Fletcher and alumni Alex Diab and Michael Paradise — will compete as individuals this weekend in the U.S. Gymnastics Championships in Fort Worth, Texas. The Championships are the second competition hosted by USA Gymnastics this year after the Winter Cup in February, and it is the first of two competitions that will have a direct impact on the selection of the U.S. Olympic men’s gymnastics team.

All three Illini gymnasts are coming into the Championships with radically different experiences in the last year. Making his return to the sport after an ACL tear, Fletcher competed in all nine of Illinois’ 2021 meets, including six all-around performances. He won the Big Ten vault championship and competed at Winter Cup, finishing tenth in the all-around and second on vault.

Paradise, pommel horse specialist and 2020 graduate, hasn’t competed since Mar. 7, 2020, when Illinois defeated Michigan and Penn State on Senior Day. That competition unexpectedly became the last of Paradise’s collegiate career when COVID-19 canceled the remainder of that season. After graduation, Paradise continued his education with a master’s program that he completed last month.

It’s not an exaggeration to say that Fletcher, Diab and Paradise will be competing against the best gymnasts in the country this weekend, some of whom the trio have competed against in prior collegiate competitions.

2021 NCAA national champions Gage Dyer, Brody Malone and Shane Wiskus will be competing, the latter of whom won the Nissen-Emery Award this year. Malone and Wiskus also are members of the U.S. national team, and several of their national teammates are also competing, including previous all-around USA Gymnastics champions Yul Moldauer and Sam Mikulak. A lot of attention is going to be directed toward Mikulak this weekend as he attempts to win a record seventh all-around championship and eventually qualify for his third Olympics.

The male senior sessions of the U.S. Gymnastics Championships — when Fletcher, Diab and Paradise compete — will air on NBCSN tonight at 9:30 p.m. and Saturday at 7 p.m.