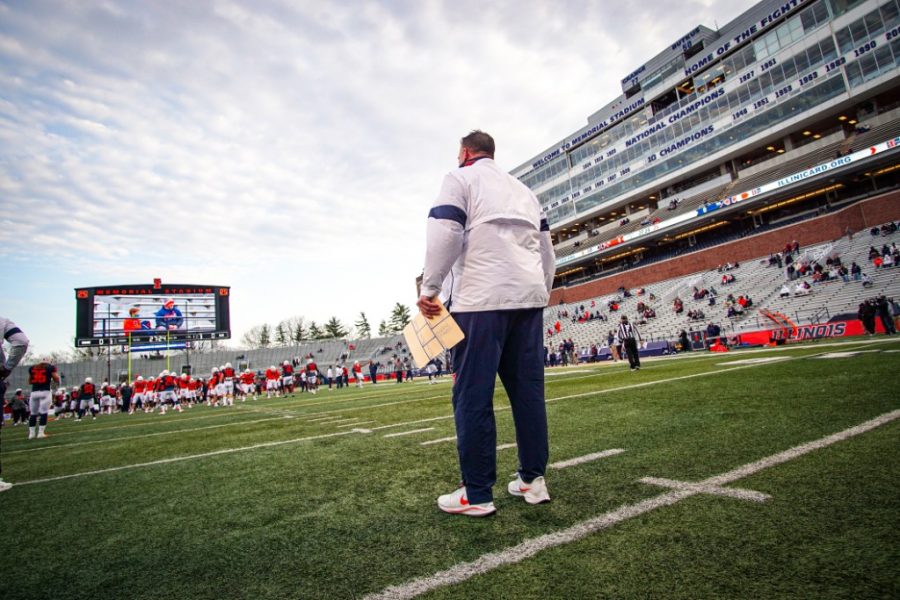 The class of 2022 is the first full recruiting class under Bielema, who was hired in December 2020. While the class of 2022 players have verbally committed and have not yet signed with Illinois, the 2021 and 2022 classes’ footprints are different.

To see the footprints for the 2021 and 2022 recruitment classes, click on the respective links to the maps below.

In the class of 2021, six of the 17 players hail from Florida, the most of any state. Illinois recruited extensively in Florida under former head coach Lovie Smith. One of the six Florida players was recruited by Bielema’s staff.

Four players are from Illinois, one of whom was recruited by Bielema’s staff, with all four hometowns close to Chicago. One player is from St. Louis, and another is from DeSoto, Texas, which is near Dallas.

Bielema announced shortly after he was hired that he divided the state of Illinois into recruiting regions and assigned a member of his coaching staff to be a contact person for athletes and high school coaches in each region. Bielema’s goal is to get the best Illinois high school players to commit to their state’s flagship university.

“I don’t care what size the school (is); I don’t care if it’s public or private, north, south, east, west, in the middle of the state: They will have contact with my staff,” Bielema said in an earlier interview. “We’ll have a general contact, as well as with anybody that believes they have a player that can help Illinois win a state championship, or a national championship, a Big Ten championship. We want them in our program.”

Outside of just football, the University as a whole also has faced similar challenges trying to get Illinois high school students, who often leave the state for college, to consider the University of Illinois. In 2017, 48.4% of high school seniors in Illinois planned to attend college out of state, according to The Chicago Tribune. The University of Illinois has made efforts to try to get students to stay in-state for college, including unveiling the Illinois Commitment program in 2019.

But Bielema’s plan is among the more comprehensive recruitment strategies that University-affiliated people have shared publicly in recent memory. While Bielema’s plan covers the entire state, Illinois’ in-state enrollment skews heavily toward the Chicagoland area. About 76.9% of in-state undergraduate enrollment was students from Cook County or counties that border Cook County in the spring semester, according to DMI data.

And, so far, Bielema has a larger Illinois footprint than his predecessor. Half the 2022 commits, four out of the eight players, are from Illinois.

Bielema’s recruiting class has been focused on the Midwest. Out of the eight players, six are from Illinois or surrounding states, with the two remaining players from New Jersey. Both New Jersey players were offered March 15, according to 247Sports.

Bielema, who is from Illinois, previously coached at Wisconsin and Arkansas. Most recently, he worked with the New York Giants before taking the job at Illinois.

For all the emphasis Bielema has placed on recruiting in state, the efforts came to fruition after players in the class committed. The first recruit to commit to Illinois in the class of 2022 was Joey Okla, whose hometown is Hartland, Wisconsin, located just outside Milwaukee.

As Bielema’s staff has focused their recruiting efforts in Illinois, the state has the most 2022 commits.

In state, the footprint is more distributed. All of the recruits came from different regions, one player each hails from Andy Buh, George McDonald and Kevin Kane’s regions, while the fourth comes from Bart Miller and Terrance Jamison’s region.

Though Bielema and his staff have yet to coach an official Illini game, their efforts to recruit Illinois students will shape their tenures at the University as they attempt to put the Lovie Smith era struggles in the rearview mirror.

Interested in learning more about the 2021 freshmen? Head to dailyillini.com/sports to see a detailed map that features all incoming players!

Note: This article only references recruits that were committed as of June 4.