Falling into place: Take a look back at Kovacevic’s five years at Illinois 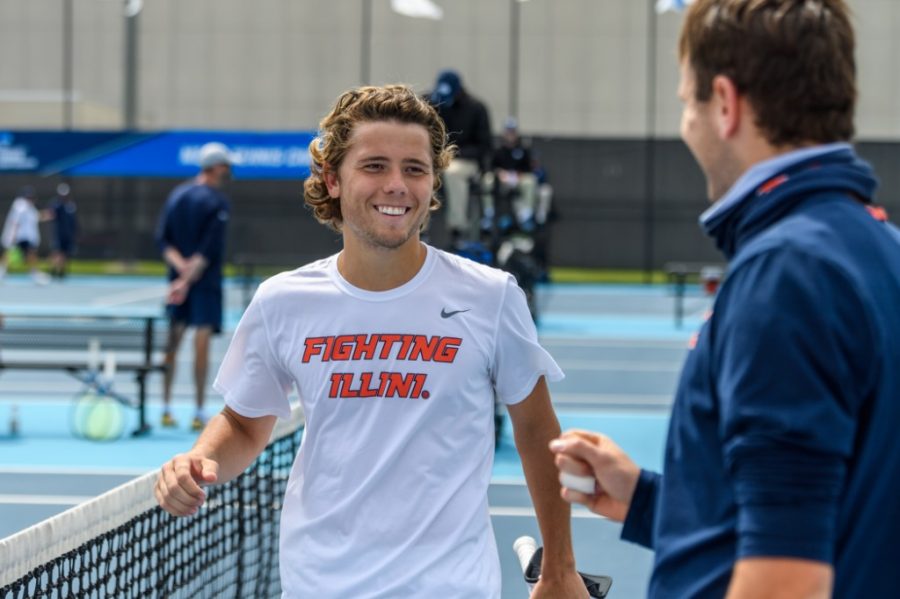 Aleks Kovacevic smiles after winning a singles match against Notre Dame May 8. Kovacevic reflects on his past five years at Illinois.

Aleks Kovacevic’s decision to play at Illinois wasn’t long in the works at all. In fact, the Midwest wasn’t even a blip in the New York native’s mind. That was until a loss turned into a win in the summer of 2016.

Kovacevic was competing in a Futures tournament in Wichita, Kansas, where, in the third round, he found himself up against one of the top recruits of the year: Zeke Clark.

They knotted the first two sets at one apiece, and Kovacevic recalls the third set being just as much of a battle, one that he ultimately lost 7-5.

After the match, Clark walked over to him and asked about college. Kovacevic thought he’d play somewhere at some point, probably after taking a semester off to figure things out. But, as of now, he didn’t really have any set plans. So, Clark, who was going to play for Illinois that fall, suggested Kovacevic take a look at Brad Dancer’s program.

“I was like, ‘You know, maybe I will,’ and I got in touch with Brad, and he got me on a visit and I loved it,” Kovacevic said. “I loved the team, just loved Illinois a lot, and I thought it was the spot for me, so I literally committed to school about two or three weeks before it actually started.”

This late decision kickstarted his five-year career as an Illini, and he’s been a budding fixture of success ever since.

Call it nature or nurture, but in the grand scheme of things, everything sort of aligned for Kovacevic to play tennis. Growing up, he lived a five-minute walk away from the Central Park tennis courts, where his parents, both professional ping pong players, would take him every weekend. The game piqued his interest, and 5-year-old Kovacevic wasn’t half bad either, so it soon became ingrained into his routine.

Lessons consumed his days, and he stopped playing soccer, a sport he also really enjoyed, because tennis brought out a different side of him — or rather, it enhanced what was already within.

He found tennis to be personally gratifying. There wasn’t anyone else but himself that he could attribute his on-court performances, and he liked that. Illinois added another layer of excitement and a different perspective, as he was now also playing for his teammates.

“The structure of college and coaches like Brad made me grow up a little bit,” Kovacevic said. “Making sure I have routines before I play, or while I play, you know, taking things I can control and fine-tuning those things definitely contributed to my consistency in terms of winning matches in my first few years and even now.”

His freshman year, Kovacevic set the tone for the rest of his time at Illinois. He posted a 23-10 overall singles record, clinched key matches — one being against the then-No. 11 Oklahoma State in the second round of the NCAA tournament — and even went skydiving, something he said he wouldn’t have ever done if it weren’t for his teammates.

“After that first year, I did set, not necessarily set some expectations, but I just had expectations of winning matches and helping the team out, putting my point up on the board, which I think sometimes put extra pressure on myself in that way, but that pressure, I mean, it’s gonna come, and it’s kinda necessary,” Kovacevic said.

That pressure, though, has been something Kovacevic has excelled with.

“I like to get challenged by higher-level opponents or occasions, I guess,” Kovacevic said. “I like to play with things on the line. You can ask my teammates. In practice, I like to put something on the line when it comes to playing anything, just because it brings something out of me I usually don’t have when I’m just playing for nothing. (It) definitely brings the best out of me and excites me.”

In a season that’s taken more than it’s given, Kovacevic has made the best of it. After deciding to return for one final year, he saw it as an opportunity to improve his game while pursuing the team’s aspirations.

“For me, personally, I got so many things accomplished this year in our season that I haven’t in my four years here, five years here,” Kovacevic said. “We won the Big Ten. We beat Ohio State. That’s probably the two biggest goals we had for the whole year and something I haven’t done in my five years here until now.

On top of the team accolades, Kovacevic found success in professional events. In competing in the Cleveland Challenger in March, he advanced to his first career semifinals. He climbed his way up the Association of Tennis Professionals’ rankings and currently sits at No. 411 in the world.

Playing in both college and professional events allowed Kovacevic to bring something new to the court each time he played. He was much more confident, played at a higher level and was more than happy he could experience the duality of the two.

“Professional tennis is something that’s super, super important to me, so being able to do both was definitely the most ideal situation I could’ve asked for, and it actually worked out pretty perfectly,” Kovacevic said. “I wanted to do everything I can to contribute to the team, and then also just try to mix in what I wanted to do for my pro aspirations.”

On May 23 in the opening round of the NCAA singles tournament, the two-time All-American achieved his 100th singles victory. Kovacevic is the 17th Illini in program history to reach the milestone, shortly after Clark also reached that mark on April 11.

Kovacevic, who became the third Illini to reach the semifinals in 2019, made another deep run in advancing to the quarterfinals. Though it was sooner than he anticipated, he ended his career as an Illini with a 14-2 season record and an overall record of 102-34.

“It definitely hit me kinda like a shock after I lost the NCAA quarterfinal match,” Kovacevic said. “I was like, ‘Wow, I’m really done.’ … Definitely been kinda like a tough thing to comprehend a little bit. I mean it had to happen at some point, so I’m just happy I got the extra year.”

With that, it’s time for Kovacevic to level up once more, to be challenged in new ways and create more special moments.

“I’m hoping to possibly have a pretty good summer to possibly make the U.S. Open qualifying draw,” Kovacevic said. “That would be pretty nice, but we’ll see. I’m trying not to put too many expectations on myself. I’ve been playing my best tennis when I just kinda feel free.”