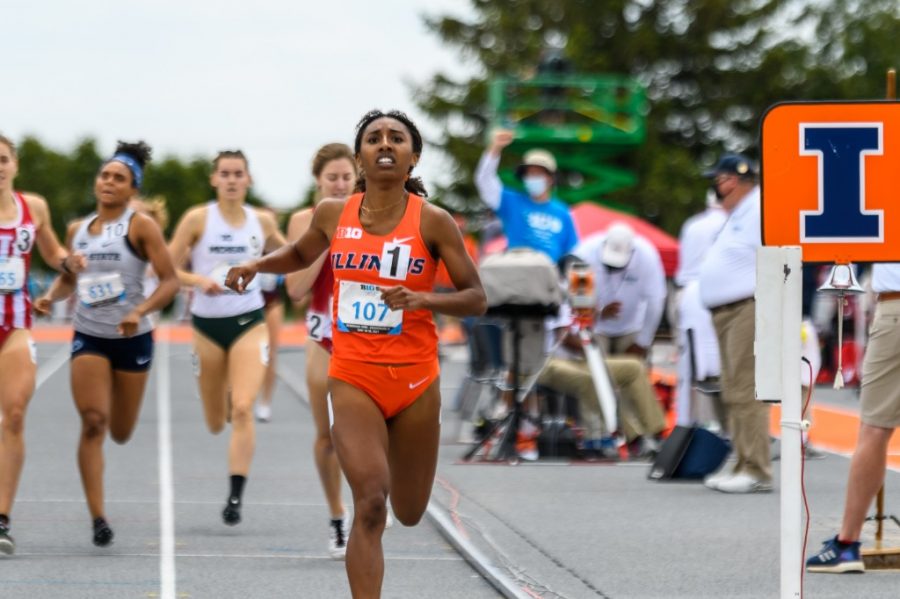 The NCAA Outdoor Championships start its four-day competition on Wednesday in Eugene, Oregon. Illinois will have three athletes competing: Manning Plater in the hammer throw, Olivia Howell for the 1500m and Jonathan Wells in both the long jump and high jump.

This year has been historical for Illinois, especially in the qualifiers for the championship this year.  Last year’s track season saw it end early due the pandemic restrictions causing a holt to training, practices and competitions. However, for some, it was beneficial.

“I am not that upset about the coronavirus putting a stop to the championships as much because it gave some of us time to better ourselves and skills, ” Wells said. “I am only upset about not being able to compete because we cannot get that time back. For some students, that was their last season, so it to end the way it did it sucks. However, I am extremely excited for all of us to travel this year and compete.”

This year has been great for Wells because even after season cancellation, the six time All-American has had an outstanding year. The Fox Lake, Illinois native was the first person to win both the high jump and long jump in the same championship meet since 1985, and it made him only the sixth person in history achieve it. Not to mention, receiving being named the Big Ten Outdoor Field Athlete of the Championships, Wells has solidified himself as one of, if not, the best high jump and long jump athlete in the Big Ten and potentially NCAA.

Wells is not the only Illini having a great season, Howell and Plater are both having perfect seasons indoor and outdoor competition. Plater has broken his own record as well as an Illinois record. He has won four event titles this year in throws plus has multiple Big Ten Athlete of the Week awards to his name. However, they are not important to him.

“I know being named athlete of the week is important to some people, but not to me, I just want to get better and be the best I can be and win,” Plater said. “I know me, Olivia and Johnathan are coming out victorious. Olivia and Johnathan have been training their hardest, even before the West Prelims.”

For Howell, her hard work has paid off in indoor and outdoor events this year. She was a two-time Big Ten Champion in the indoor one-mile and outdoor 1500m, where she set a new school record with a time of 4:12.86. Howell is the only female representing Illinois and expectations are high for the Solon, Ohio native.

In the 2019, Illinois finished with two fifth place finishes, with one third place finish coming from Wells. The Illini have four days to bring home some silverware and with the season Illinois has had, it is possible.