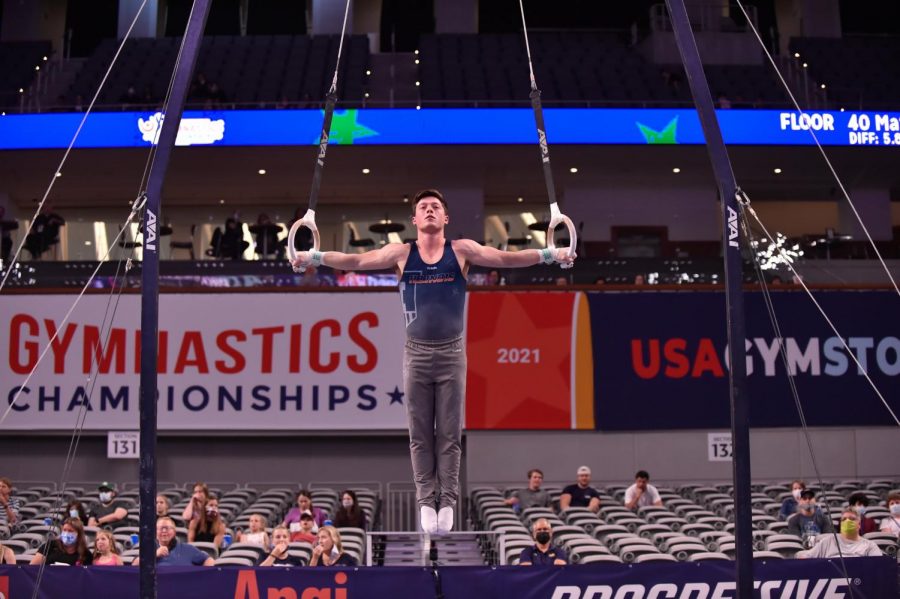 Alex Diab performs on the still rings during the U.S. Gymnastics Championships in Fort Worth, Texas. Diab won the event, earning him a spot on the U.S. national team and a place in the Olympic Team Trials at the end of June.

Last weekend, three Illini gymnasts faced the best gymnasts in the country when they competed in the U.S. Gymnastics Championships in Fort Worth, Texas. Rising senior Michael Fletcher competed as an all-arounder, while alumni Alex Diab and Michael Paradise competed in their specialty events — still rings and pommel horse, respectively.

But it was Diab who saw the most individual success among the Illini trio. “The Lord of the Rings” entered the Championships as the defending still rings champion, and he successfully defended his title with a two-day score of 29.600 (14.950 and 14.650). Diab outscored Stanford’s Brody Malone by .45 points to reclaim the title.

In addition, Diab was named to the U.S. senior men’s national gymnastics team and qualified for the U.S. Olympic Team Trials based on his Day 1 score alone. A score of 14.950 would’ve placed him in the top three on still rings had he competed in the 2019 World Championships, which qualified him for the national team. This, in turn, automatically qualified him for the Olympic Team Trials.

Everything Diab did and accomplished last weekend was in accordance with the goals he set for himself.

“My goals going in were to win rings and make it to the next one, and that’s what I did,” Diab said. “I’m super proud, and I’m excited for what’s to come, but I’m not surprised. This was my plan.”

After winning the still rings title at Winter Cup in February, Diab spent the next four months preparing for the Championships, fine-tuning his routine and improving his strength and endurance. The level at which he was performing in practice gave him the confidence he needed to win in Fort Worth, confidence that was bolstered by his Day 1 performance.

Having crossed two major accomplishments from his Championships bucket list on Day 1, Day 2 was a lot less stressful and more relaxed, Diab says. Though his Day 2 score was slightly lower than his Day 1 score, it was still enough for Diab to claim the still rings title and finish off his bucket list.

Despite the Championships revolving around individual performance, Diab said it felt in part like he was competing at a collegiate team meet because he had Fletcher and Paradise, along with Illini head coach Justin Spring and assistant coach Don Osborn, to cheer him on and congratulate him on his success. His success also helped bolster the morale of the Illini delegation.

“I’m so proud of Alex,” Spring said in a press release. “He has worked so hard for this opportunity for so long. He’s proved he can be one of the best in the world on rings.”

Being one of the best gymnasts in the world is another goal Diab has, and this goal serves as his primary motivation. He has the highest starting value on still rings of any gymnast in the U.S. but trails some gymnasts from other countries by a few tenths of a point. Diab hopes to add a few upgrades that will close the gap, but he is focusing more on perfecting the routine he already has.

“I can hang with them if I stay clean and have good execution on my routine,” Diab said. “The biggest thing is getting cleaner, working on sticking my dismount more often. If the upgrades come, then they come. If not, I know that I can have a strong performance with the routine I’m doing right now.”

Diab has a little less than two weeks to prepare for the Olympic Team Trials, with the men’s competition happening on June 24 and 26 in St. Louis.