Column | Dear Kofi: Illinois will get you to the NBA 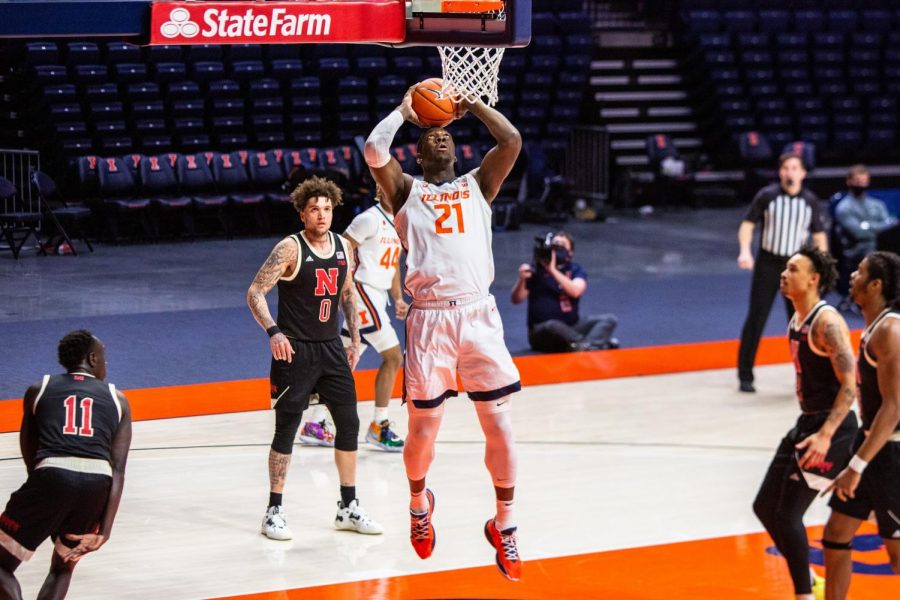 Kofi Cockburn dunks during a game against Nebraska Feb. 25. Kofi Cockburn has a choice to make on whether he wants to stay at Illinois for another season or go to the NBA.

Your impact on the Illinois basketball program cannot be overstated. Your sheer size, talent and dominance down low lifted a program resting in the Big Ten’s basement to national relevance. Despite an early exit in the NCAA tournament last season, you made a campus believe that its basketball team can compete with the nation’s best. I’m being honest: You owe us nothing. You coming down to Illinois and performing the way you did woke up a basketball rich program. But now, it’s our turn to give back, and playing another season under Brad Underwood gives you the best chance of fulfilling your dream of playing in the NBA.

Recently, I’ve heard you have entered the transfer portal, keeping your options open if you decide to remove your name from the NBA Draft. If you believe you have what it takes, stay in the draft. But if you do return to college, it should be focused solely on how to provide you the tools to get drafted next season — not blue blood status of other programs. By selecting Illinois, you will select a tailor-made situation for you to continue to improve — like what happened from your freshman to sophomore seasons.

Surface-level thinking may lead people to think Illinois may fall a bit next season. Ayo Dosunmu is gone. Adam Miller is gone. Giorgi Bezhanishvili is gone. But your head coach, Brad Underwood, has successfully built a program that can withstand the departures — and, quite frankly, maybe even made it better.

Ayo Dosunmu is an Illini legend, and he will be missed. But between you and Andre Curbelo, the Illini didn’t miss a beat, which included smacking the Wolverines by 23 in your 3-0 run without him. You also averaged over 18 points a game without him. Kofi, if you return, Illinois will be a top 10 team to start the season. Even with the departures of key players, this is an incredibly experienced team that can replicate that magic in late February and March.

Sure, the announcement of Adam Miller departing the program was a shock, and he showed flashes of great potential — especially in the opening weekend and against Loyola Chicago. But Adam also struggled during the mid-season, averaging points in the single digits. Coach Underwood promptly replaced the would-be-sophomore with an experienced senior guard from Utah who shoots 40% from 3-point range. Add in the return of Jacob Grandison, DaMonte Williams and Trent Frazier, and you will have more than enough outside threats to keep defenses honest down low.

At places like Kentucky, growing pains will exist. That’s what happens when John Calipari sticks a bunch of high schoolers together and tries to see what works. Instead of dealing with prima donna five-star recruits who haven’t played a minute against collegiate programs, staying at Illinois means you get one of the best playmaking guards in the country, ready to dish it out to you in the paint. Curbelo was electric last season, and, quite frankly, Kentucky has no one on its roster that can immediately replicate his play. Curbelo will make you look better.

While Illinois did bring in Omar Payne and are looking for other bigs to potentially try to fill your shoes, they will complement you well in Champaign, not threaten you. While losing Giorgi is a bummer due to the Georgia native’s ability to score at times, the defense will improve tremendously with Omar and Coleman Hawkins.

Right now at Kentucky, Calipari already has a collegiate ready center ready to play day one, Oscar Tshiebwe, who averaged double-digit points at West Virginia. Yes, I do think you are 10 times better than him, but the fact is there’s no chance Calipari won’t reduce your minutes to get his transfer playing time. Calipari is currently on the move to secure five-star big man Jalen Duren, another player who will clearly cut into your minutes if you both choose Kentucky. Calipari’s main pitch is to try to piece together whatever he can get to wipe away the memories of his 9-16 season. The offense won’t run through you.

And, finally, with the NCAA preparing to allow players to profit off of their likeness, your established brand in the Champaign-Urbana community will provide you the chance to make a lot of money. Imagine if your former teammate Ayo Dosunmu had the Name, Image and Likeliness laws in his favor last season. Do you think Ayo’s brand was tarnished because he was in Champaign and not in Los Angeles, Lawrence or Lexington? Of course not. The Masked Ayo who consistently made clutch shots became one of the most famous players in the nation, even without a long stay in March. He was the no-doubt face of the program that was rising in national relevance instead of just being lost in the mix with another program.

Kofi, you can be the face of college basketball if you stay at Illinois. You’re a huge, seven-foot monster whose blocks and dunks make SportsCenter highlight reels. You live in a state where Chicago is two hours away. You will be competing in the top conference in the country with national audiences watching you compete against Michigan’s Hunter Dickinson. You will be the Big Ten preseason player of the year and a clear front-runner for the Naismith Award. You have the chance to lead a basketball-starved fan base to the Final Four — with NBA scouts watching you along the way.

The beauty is that you won’t have to start over. You won’t have to deal with freshmen who will struggle to find themselves early. By selecting Illinois, you get an experienced and dynamic point guard, solid support from behind-the-arc, excellent defensive help down low and a head coach who is determined to help you improve even more. You can merely focus on basketball instead of having to bail out Kentucky youngsters who aren’t quite ready to compete right away.

Illinois was great last season, but with you returning, they can even be better. Alfonso Plummer is better than Adam. Brad brought in front court help. Trent and DaMonte are running it back. And, of course, you are one of the dominant players in the country. I know the NBA Draft is tempting, but you can improve your stock so much more with another season in college. And instead of having to start over as a junior, Illinois is prepared to welcome you back with a mature, experienced team that will allow you to improve your game. Oh, and you can make a lot of cash, too. Illinois is the place for you to become a sure-fire NBA player.