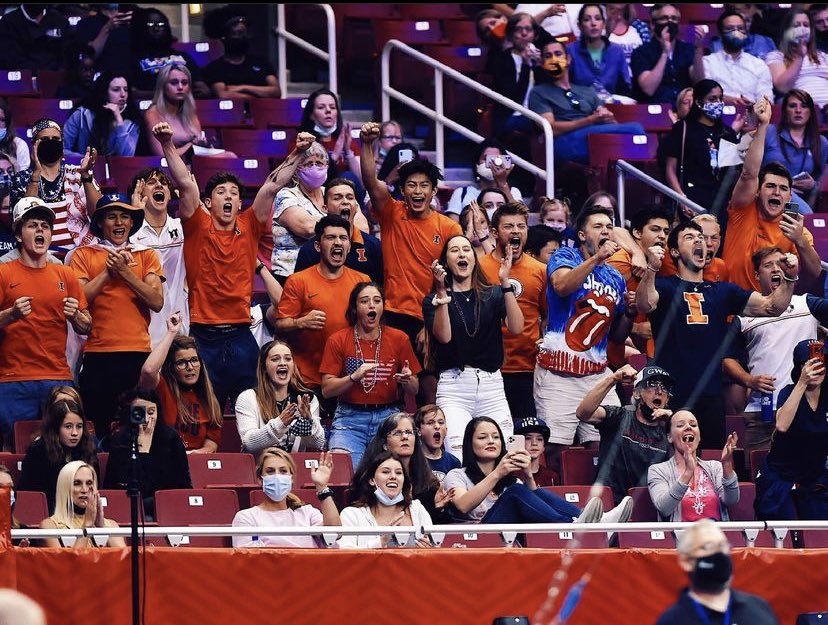 Members of the Illinois men’s gymnastics team cheer for coach and former teammate Alex Diab at the U.S. Olympic Team Trials. Diab will be an alternate for Team USA and will travel with the team to Tokyo.

When Alex Diab competed in the U.S. Olympic Team Trials two weeks ago, he did so with the largest and loudest cheering section in The Dome at America’s Center.

Diab’s cheering section was pretty hard to miss. A good portion of the section wore orange, easily visible amidst the crowd and the red seats of the Dome. The I-L-Ls and I-N-Is belted out were so loud they were picked up by the microphones used by NBC’s commentators and broadcasted to those watching on TV.

The people who made up that cheering section included Diab’s family and his Illini teammates. Rising junior Connor McCool estimated that of the 22-member Illini men’s gymnastics team, only three members were unable to make the trip to St. Louis.

“It was a no-brainer,” McCool said regarding the team’s trip. “As soon as we found out Alex qualified, a group wanted to caravan out there. We really wanted to bring the energy for him because it’s such a huge accomplishment to even be there.”

It was important for the Illini to make the trip not only because of Diab’s accomplishment, but because the Trials was the first and only 2021 competition at which they could cheer for Diab. When Diab competed at Winter Cup in February, he did so with no spectators in attendance. While spectators were allowed at the U.S. Gymnastics Championships earlier in June, the location — Fort Worth, Texas — was too far away for the Illini to travel to.

Supporting Diab and fellow Illini alum Tyson Bull at the Olympics in Tokyo is out of the question. Foreign spectators have been barred from attending Olympic events since March. Last week, the spectator ban was extended to Japanese citizens amidst a surge of COVID-19 cases in Tokyo. No one will be in the stands to watch the world’s best athletes compete on the highest stage.

But with spectators allowed at the Trials, and with the Trials happening in a city just a three-hour drive away from Champaign, it was more than feasible and affordable for the Illini to make the trip.

“We were definitely the luckiest in terms of location,” McCool said. “We had the location advantage. We sat near some Stanford guys and they were talking about how they had to fly. We could drive. Nobody had to fly or anything.”

Diab was not available for comment, but his appreciation for his cheering section was on full display after his performances. He pumped his fist in the crowd’s direction as they chanted his name. According to McCool, Diab was left in the dark on a few details and was somewhat surprised by the team’s appearance at the Trials.

“He knew we were coming but I don’t think he realized that all of us were coming and in what fashion we’d be there,” McCool said. “He did send a message in our GroupMe to the effect of ‘Thanks for coming out. You guys are awesome.’”

There was nothing special about the team’s cheering and the energy they brought to the Trials. It was the same kind of cheering and energy the team has for its own members during collegiate competitions.

“We just brought it to the elite world, where there’s much more individual competitions,” McCool said. “Usually you don’t have those huge cheering sections because you’re competing for yourself. It’s not as common to have a group like that.”

The rarity of a cheering section like Diab’s, along with its volume, made it especially prominent in The Dome and on TV. NBC’s cameras panned over to the section as they cheered for Diab after his performances, prompting NBC’s commentators to take notice. NBC’s Olympic Twitter account tweeted a video of Diab’s Day 2 performance with the caption “Get you a cheering section like (Alex Diab).”

While McCool and the rest of the Illini were disappointed that Diab was named to the alternate Olympic team as opposed to the main team, McCool nonetheless enjoyed the trip and the experience.

“It was such an unreal experience,” McCool said. “It was super packed so there was an awesome ambience to it. The stakes were so high that you could feel it in the arena. Every good routine and every mistake, the effects of it were amplified. Just to watch the best gymnasts in the country come together in one place, and with Alex a part of it, was an amazing experience.”