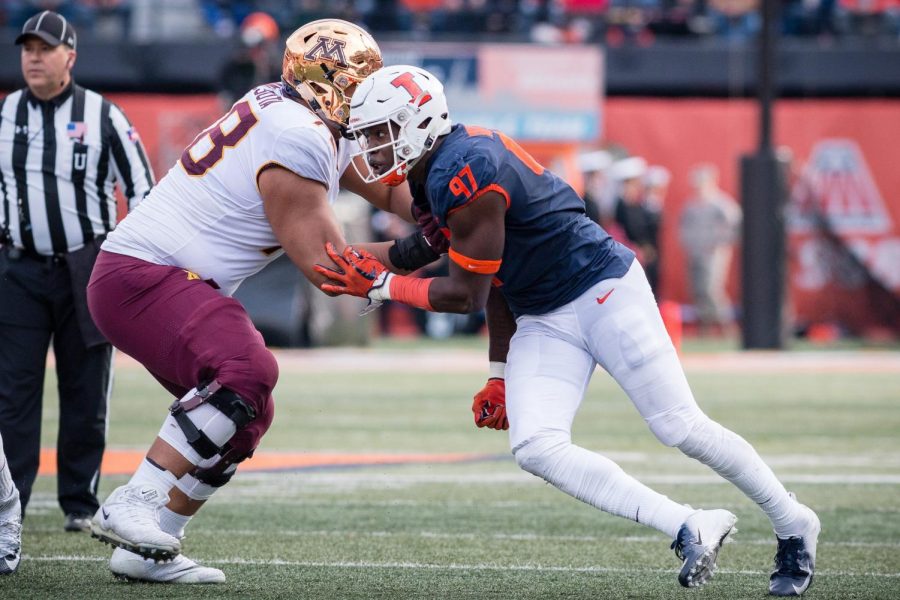 Bobby Roundtree (97) takes on an opposing offensive lineman during the game against Minnesota at Memorial Stadium on Saturday, Nov. 3, 2018. Roundtree passed away on Friday at the age of 23.

Roundtree was one of Illinois’s best defensive players in 2017 and 2018, playing all 24 games across those two seasons. After earning a spot on BTN.com’s All-Freshman team, he had a breakout sophomore season, leading FBS defensive linemen in pass breakups with seven. He also led the team in tackles-for-loss (12.5) and sacks (7.5) while contributing 66 tackles, earning the team’s Dick Butkus Outstanding Defensive Player award and an All-Big Ten honorable mention. Roundtree was expected to be one of the Big Ten’s best pass rushers in 2019 and was even considered an NFL prospect.

But, in May of that year, Roundtree suffered a severe spinal cord injury in a swimming accident near his home of Largo, Florida. The football team immediately rallied behind Roundtree, adopting the slogan “97 Strong” for the 2019 season and adorning their helmets with decals dedicated to Roundtree. The Illini fan base also rallied around Roundtree, donating more $168,000 to two GoFundMe fundraisers for Roundtree’s rehabilitation.

That football season, the Illini received a bowl invitation for the first time since 2014 after a regular season highlighted by an upset victory over Wisconsin and the largest comeback in school history in a win at Michigan State. Roundtree returned to Champaign for the first time since the accident for Illinois’ regular season finale against Northwestern, delivering a pregame speech to the team and appearing on the field at halftime.

Punter Blake Hayes spoke of Roundtree and the impact he had on the team in his tribute.

“In a negative situation, he carried with him a contagious positive mindset and inspired all of us to be better,” Hayes said. “Rest in peace brother.”

Illinois athletics director Josh Whitman paid tribute to Roundtree in a press release, in addition to a tweet of his own.

“All of us with Illinois Athletics are shocked and saddened by the sudden passing of Bobby Roundtree,” Whitman said in the press release. “From his first day on campus, Bobby was a leader. His work ethic, competitive fire and drive for excellence set him apart. Following his tragic accident, those same qualities allowed him to tackle his new challenges with the same vigor and determination that we had seen on the football field. In so doing, he continued to bring light and inspiration to the lives of those around him – and, in fact, to so many people who had never had the pleasure of meeting him.”