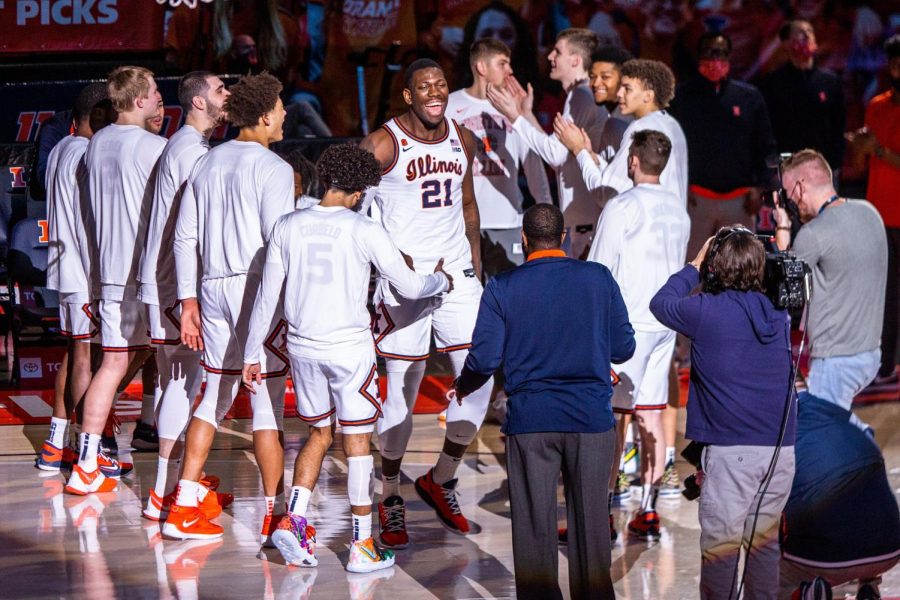 Kofi Cockburn is introduced during pregame lineup announcements against Wisconsin on Feb. 6. With Cockburn’s return, Illini fans should hope their team can make it into the second weekend of the NCAA tournament for the first time since 2005, Simberg writes.

When Kofi Cockburn entered the transfer portal on July 1, Champaign was in shock.

The college basketball world had been shaken up by the transfer portal this offseason, with a record number of guys entering, but none were more impactful than Cockburn. He became the first — and only — All-American to enter the portal.

At the beginning of the offseason, very few people expected the 7-foot All-American to return to Illinois. But there was a wide range of emotions once it became possible that Cockburn could return and elect to play college basketball elsewhere.

Illinois fans had seen said movie a few too many times this offseason: Adam Miller transferring to LSU, assistants Orlando Antigua and Chin Coleman leaving the Illini for Kentucky and losing Marquette transfer Dawson Garcia to North Carolina at seemingly the last second.

Naturally, the rumors of Cockburn being interested in Kentucky started up. After all, Antigua was the primary big man coach for Cockburn last season. Given the way this offseason had gone, it was a refreshing sign for Illini fans when Cockburn tweeted a video announcing his return.

On a micro level, this is obviously a huge win for Brad Underwood’s program. The offseason additions of Alfonso Plummer and Omar Payne had the Illini projected to be a tournament team again, but adding Cockburn back to the mix has them as a clear top-25 team, probably closer to No. 10. A Big Ten title is now in play, as Illinois appears to be in the top tier of the conference, along with Purdue and Michigan.

But on a macro level, this is the next step into turning Illinois into an elite program. Programs in that upper echelon stack multiple winning seasons together and are consistently in the mix for conference titles and tournament bids.

At one point this offseason, it appeared Illinois would be a one-hit wonder. Sure, it could string together seasons as a mid-level tournament team, but maybe the Illini would never have a special season like the one that just took place.

Cockburn’s return puts an end to that thought.

With higher expectations come greater pressure to reach those goals. Illinois has a likely preseason All-American in place, two senior shot-making guards with tons of experience — Trent Frazier and Plummer — and veteran forwards who have proven they can play key minutes in big games: Da’Monte Williams and Jacob Grandison.

Last season was a magical one for the Illini, but it was a season that ended earlier than expected with an upset loss in the round of 32 to Loyola. The Illini have won more Big Ten games than any other program in the past two seasons.

But they haven’t made the second weekend of the NCAA Tournament since 2005. The regular season wins are a positive sign, but the March successes will need to follow. With Cockburn back controlling the paint, the second weekend is certainly in play for the Illini, and an expectation that probably needs to be met.