Illinois soccer: What matches to look forward to for upcoming season 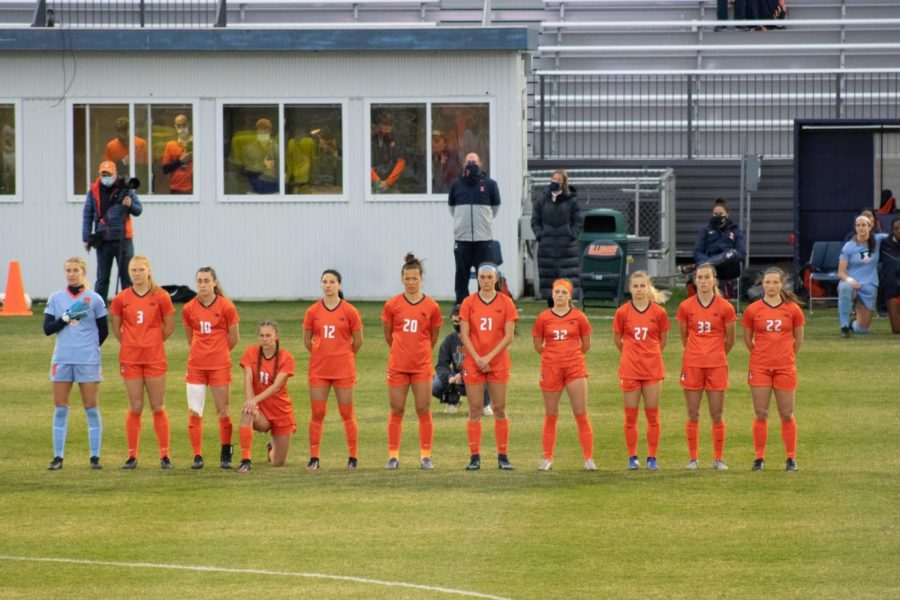 The Illinois starting line-up prepares to face Iowa April 7. Although the pandemic is still around, there will be more opportunities to see the women’s soccer team this fall.

Last season saw a slate of conference-only matchups due to the pandemic, but for the upcoming fall, Illinois soccer will be facing a handful of nonconference opponents. With more games on the schedule, that means there’s more to look forward to.

Nonconference games allow teams to test the waters with new players, formations and playing styles. Games can end in upsets or complete domination on the field. Looking back at the 2018 season, Illinois beat both then-No. 3 Duke and No. 14 Oklahoma State with game winners from alums Katie Le and Arianna Veland.

For Illini fans, this is what I would consider to be five matches to look forward to for this upcoming season.

The Tar Heels are without a doubt the most decorated collegiate women’s soccer team, and every girl’s dream to play for them. It’s head coach Janet Rayfield’s alma mater, and she was part of the inaugural team back in 1979. During her time as a Tar Heel, the team went 23-0 her junior year and was crowned NCAA tournament champions her senior year.

Plus, North Carolina is home to the likes of Mia Hamm, Tobin Heath, Crystal Dunn, Heather O’Reilly and many more. Who wouldn’t want to see a game in which Illinois plays against a school with a rich history when it comes to women’s soccer?

When it’s time to face Iowa, I bet Illinois will have a sour taste in its mouth. A loss in the first round of the Big Ten tournament was upsetting since it came on a golden goal. The Hawkeyes eventually went on to win the Big Ten tournament and earned a bid to the NCAA Tournament, where they made it to the second round.

Iowa went into the postseason with a negative record, and it was bound to get knocked out, but the young Hawkeye team toughened up and went on to dominate, with Macy Enneking and Meike Ingles leading the pack.

We won’t know if Iowa’s great run of form was just the energy of the postseason or if something clicked, but we will have to wait until the season to see the team back in action.

Like North Carolina, Notre Dame is also a highly decorated school when it comes to women’s soccer. The Fighting Irish hold three NCAA championships and have continuously made appearances in the tournament.

As another school that boasts a rich history in women’s soccer, Illinois will be graced with playing against a good program where it can be a learning opportunity once you look past the fact that they are going head to head and both teams want to come out as winners.

Remember former Illinois goalkeeper Jaelyn Cunningham, who graduated in 2020 and was named to the All-Big Ten Second Team in 2018?

The game will reunite Cunningham with her alma mater and will be the second meeting between the two programs.

Like Penn State, Rutgers is also a powerhouse in Big Ten women’s soccer. With the likes of National Women’s Soccer League Portland Thorns draftee Amirah Ali back for her fifth year, she will certainly be a menace to defenders.

Though Illinois will not be facing Penn State during the season, Rutgers will still be a tough team to beat, so it will be interesting to see how the Illini try to break down the defense to thread a ball through against a strong team that they have not played since 2018.