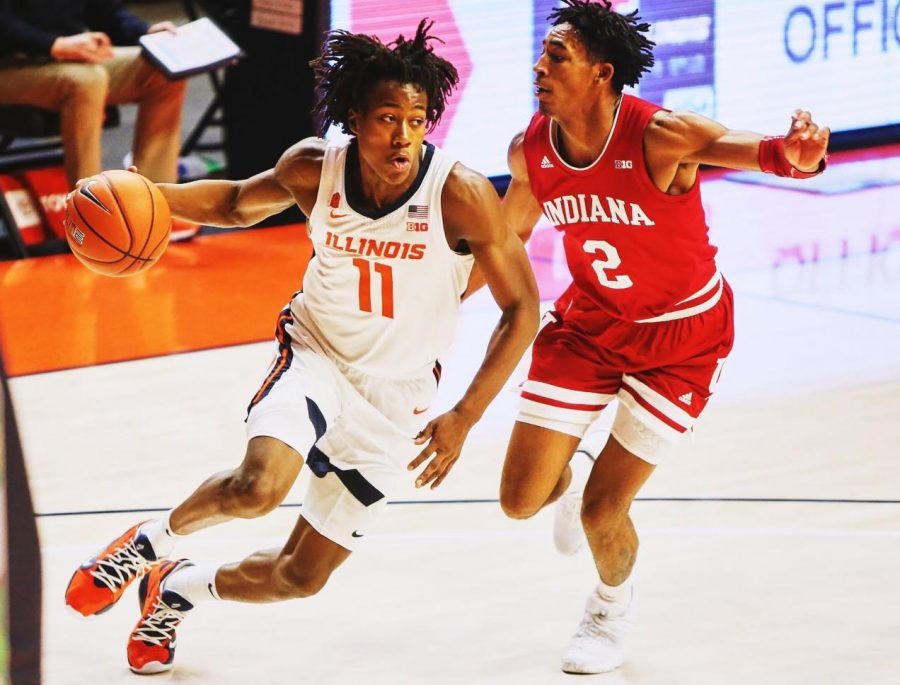 Guard Ayo Dosunmu drives to the basket against Indiana at State Farm Center on Dec. 26. Dosunmu was selected in the 2021 NBA Draft, becoming the first Illini since 2012 to achieve the feat.

After months of speculation and standout performances, the time has come: Ayo Dosunmu has been selected by his hometown  Chicago Bulls in the second round of the 2021 NBA Draft.

Dosunmu, a Chicago native, put together three historic seasons in Champaign, averaging 16.7 points, 4.8 rebounds and 3.9 assists while starting all 90 games he participated in.

“Tonight we saw Ayo’s dreams come true, and no one is more deserving of this moment than him. He has been preparing for this opportunity his entire life,” Illinois head coach Brad Underwood said in a statement. “The work he puts in to perfecting his craft and the way he handles himself on and off the court allowed him to have historic success at Illinois, and those same attributes will serve him well in the NBA. I know this, the Bulls are getting a young man of the highest character with unparalleled work ethic, and above all else, a winner. We are thrilled for Ayo and the entire Dosunmu family, and proud that he will be representing Fighting Illini Basketball at the highest level.”

As a freshman, Dosunmu was named to the Big Ten All-Freshman Team while leading the team in both scoring and assists. He also guided Illinois to a huge upset win over No. 9 Michigan State, a game in which he scored 24 points, including two 3-pointers with under three minutes to play to seal the win.

After a standout freshman season, the star guard took his game to a new level as a sophomore following the arrival of Kofi Cockburn on campus. Dosunmu was an All-Big Ten inclusion and led the team in points and assists for a second straight season.

After finishing his sophomore season, all signs pointed to him playing in the NBA the following season. But Dosumu wanted to continue building his legacy in Champaign, a legacy that now cements him as one of the greatest players in program history.

Opting to withdraw from the 2020 NBA Draft and return t0 Illinois for a junior season, Dosunmu made history in his third year in Champaign. He became the first player to average at least 20 points, six rebounds and five assists in the last 11 seasons, notching a career best in all categories with 20.1 points, 6.3 rebounds and 5.3 assists, while leading the team in scoring and assists for the third consecutive season.

Though Dosunmu’s Illinois career ended earlier than expected with an upset loss to No. 8 Loyola Chicago in the second round of the NCAA tournament, the Chicago native racked up several accolades, including unanimous All-Big Ten First-Team and consensus All-America First-Team honors, Bob Cousy Point Guard of the Year award recipient and USA Today National Player of the Year winner. Dosunmu also became the first player in program history to earn Associated Press All-America First-Team honors.

Numbers don’t tell the whole story of Dosunmu’s illustrious and accolade-filled college career. As a four-star recruit, Dosunmu followed in the footsteps of Illinois legends Luther Head, Kendall Gill, Deon Thomas and Dee Brown — among others — by opting to remain in-state for college and play for his state’s flagship institution. Though Dosunmu also visited Southern California and Wake Forest prior to committing to the Illini, his decision to play in Champaign changed the tide and trajectory of the Illinois men’s basketball program, a decision that will positively affect the Illini for years to come.

Dosunmu’s jersey will now deservedly hang in the rafters at State Farm Center, and he becomes the first Illinois player selected in the NBA Draft since 2012, though he is the first Illini guard to hear their name called during the draft since Brown in 2006.