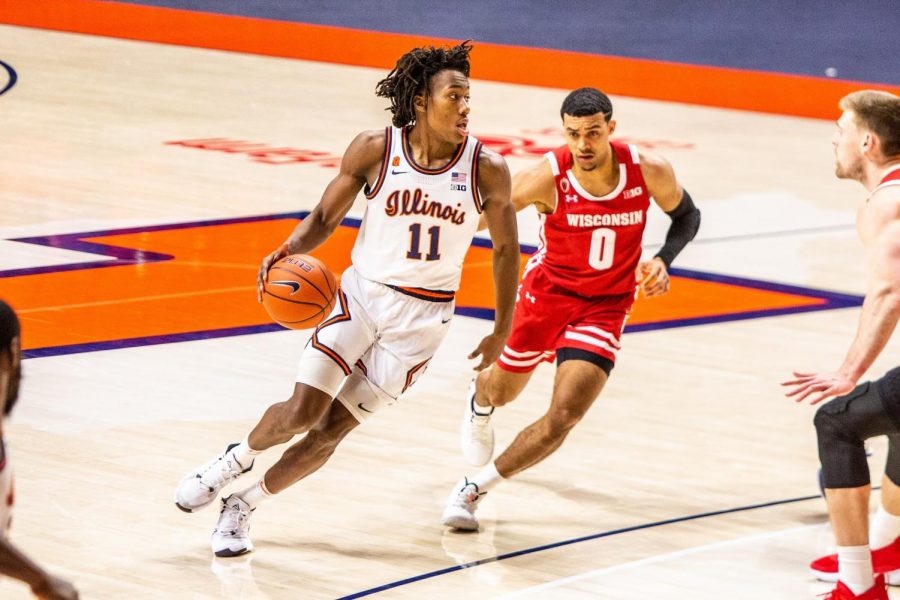 Ayo Dosunmu looks for teammates during the game against Wisconsin at State Farm Center on Feb. 6. After being selected by the Chicago Bulls, Dosunmu will join a team with depth at the guard position.

It was an emotional roller coaster of a night for Ayo Dosunmu. Believed to have a chance to go in the first round of the 2021 NBA Draft, the Chicago native could do nothing but sit and wait as players continued to get picked before him.

Finally, a phone call came in around 10:37 p.m. Moments later, the Chicago Bulls selected Ayo Dosunmu with the 38th overall pick. Just like when he was a high schooler, Dosunmu would be staying home for the next stage of his basketball career.

Dosunmu’s fit with his hometown Bulls is an interesting one. They enter the offseason with shooting guard Zach Lavine under contract, combo guard Coby White and point guard Tomas Satoranksy. Like White, Dosunmu is in that combo mold. There’s depth in the backcourt, but Satoranksy and White are coming off middling seasons. With cap room to spare, the Bulls have been linked to a few point guards in free agency.

Nothing will be handed to him, but Dosunmu should be in line for a spot in the rotation if he impresses at Summer League. The reigning Bob Cousy Award winner, Dosunmu is more league ready than other second-round guards.

Many people surrounding Illinois expected Dosunmu to be a first-round pick. A report from The Athletic mentioned that the Lakers were interested in him at No. 22. He also had been linked to the Nuggets at No. 26 and the Clippers at No. 25.

Not all those teams ended up keeping their picks, with the Lakers trading out of the first round, and the Clippers trading up to No. 21. Teams linked to Dosunmu in the second round, like the Bucks at No. 31 and the Knicks at No. 32, also traded out of those spots.

But I don’t think the expectation around the league was that Dosunmu was going to go in the first round. Intel-based mock drafts from ESPN, The Ringer, Sports Illustrated and The Athletic all had Dosunmu in the second round in their respective final mock drafts.

He may have been seen as a first-round pick a few months ago, but things changed. The NBA Combine clearly played a role in how teams viewed players. Dosunmu sat out of the combine scrimmages, while players who excelled in that event like Joshua Primo, Nah’Shon Hyland, Quentin Grimes, Josh Christopher and Jason Preston all surpassed him. Dosunmu was not alone in that regard.

Figuring out the base salary and roster spot for the 38th pick can vary by year. Last year, the Pistons signed Saben Lee to a one-year, two-way contract around $500,000. But two years ago, the Bulls signed Daniel Gafford to a four-year contract, starting at $898,000, slowly rising to $1,900,000 by year four (with a team option). Given the Bulls lack of players under contract, and the fact that Dosunmu was their only draft pick, I expect Dosunmu’s deal to be closer to Gafford’s.

Dosunmu will suit up for the Bulls in a few weeks at NBA Summer League in Las Vegas. While I feel confident that he’ll make the roster come October, a strong showing in Vegas could bury any doubt. He’ll have some time off to train and rest before starting training camp in September. The 2021-2022 NBA season begins Oct. 19.