Illini at the Olympics: Poulter, Bartsch-Hackley advance to quarterfinals with Team USA volleyball 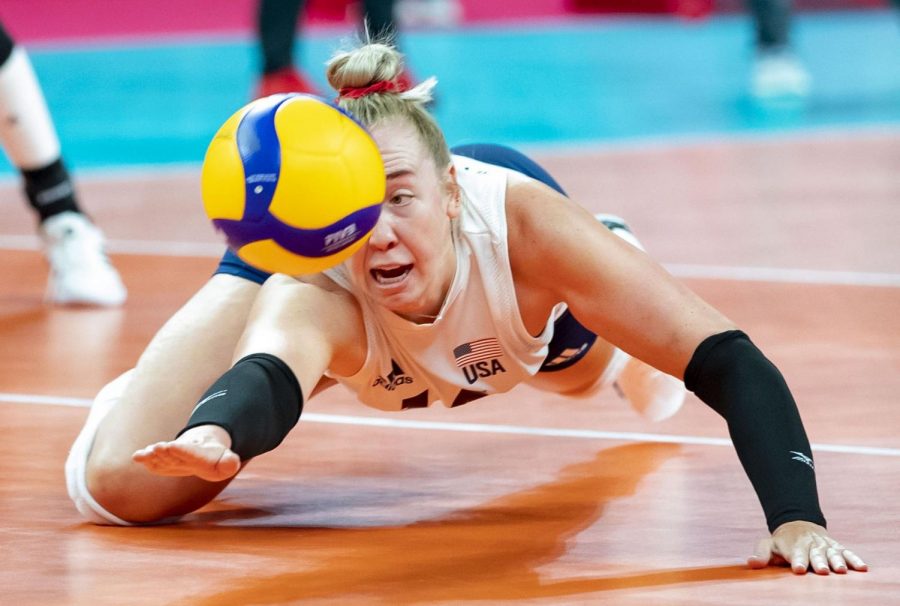 Former Illini Michelle Bartsch-Hackley dives to save the ball July 27 during the Tokyo Olympics. All eight former Illini at the Olympics have been working hard.

Last Friday, the Tokyo Olympics kicked off. Eight former Illini are competing. Here’s how the Illini did this week.

Bull is competing for Australia in artistic gymnastics. He competed in parallel bars and horizontal bars, advancing to the final in the latter. He will compete in the finals Aug. 3.

The U.S. will advance to the quarterfinals in volleyball. Poulter was injured during Sunday’s match but later watched the match from a wheelchair on the sidelines.

Kendziera competed in the 400m hurdles for Team USA, making his Olympic debut July 30, in the first round of competition. He finished fourth in his heat with a time of 49.23 seconds, and advanced to the semifinals.

In Sunday’s semifinals, Kendziera finished third in his heat with a time of 48.67 seconds. Since the top two in each heat advanced to the finals, Kendziera’s run in Tokyo came to a close Sunday.

Golf began Wednesday, with the tournament running through Sunday. Detry is making his debut while Pieters placed fourth in 2016, when golf returned to the Olympics.

Pieters finished Wednesday’s opening round in third place, shooting six strokes under par. Detry was in 31st, shooting one stroke under par.

At the conclusion of Round 3 Friday, Pieters and Detry were in a three-way tie for 14th place, shooting 8 under par for the entire tournament alongside Joaquín Niemann of Chile. Pieters shot 7 under par Friday while Detry shot 3 under par.

Ram competed in his second Olympics, as he won silver alongside Venus Williams in mixed doubles in 2016, losing to Americans Justin Sock and Bethanie Mattek-Sands. This year, Ram competed in men’s doubles with Frances Tiafoe Jr. and mixed doubles with Mattek-Sands. Tiafoe and Ram defeated Karen Khachanov and Andrey Rublev of ROC in the opening round, and lost to Ivan Dodig and Marin Čilić of Croatia Tuesday in the second round.

Mattek-Sands and Ram lost to Laura Siegemund and Kevin Krawietz of Germany Wednesday in the opening round of the mixed doubles tournament.

Diab was an alternate for Team USA in gymnastics, and he would have competed in case another USA gymnast was unable to. Despite traveling to Tokyo, he did not compete and was not listed on the Olympics website.