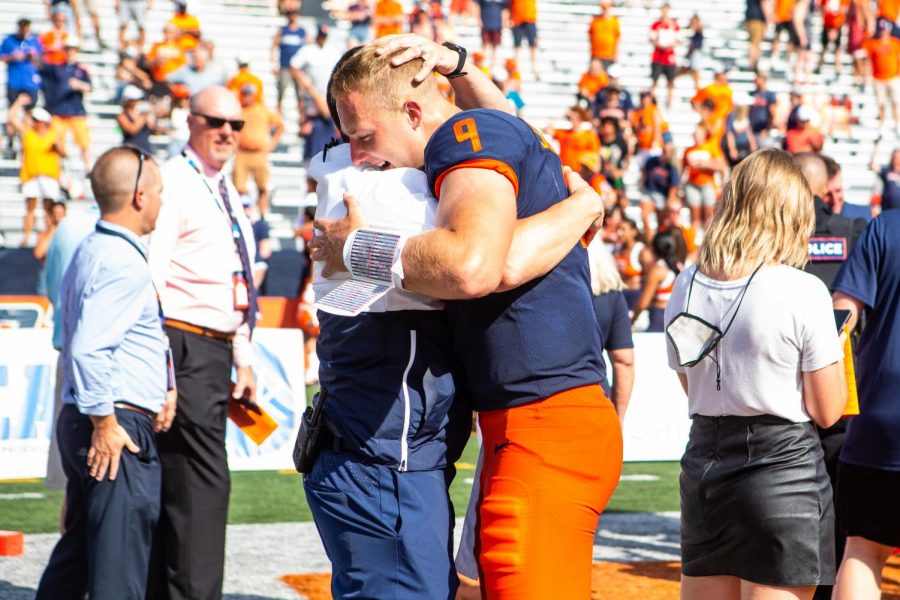 Illinois quarterback Artur Sitkowski celebrates after the game against Nebraska at Memorial Stadium on Saturday. Sitkowski was not expected to play, though he got significant game time during the final three quarters following an upper-body injury to Brandon Peters.

On what was one of the most anticipated days of Illinois football in recent team history, the Illini showed up big and defeated the Nebraska Cornhuskers, 30-22, to give new head coach Bret Bielema his first win in Champaign.

Despite trailing 9-2 in the second quarter after a major setback to the offense, the Illini used a 28-0 run to take a 30-9 lead on the Huskers- and ultimately hold on to win the game.

Despite this being only the first game of the year, Saturday’s win over Nebraska was a big one for the Illinois football program. They completed a big win in front of a sold-out student section and an atmosphere that Memorial Stadium hasn’t seen in years, and used solid team play to start the season 1-0.

No BP? No problem

I say this very lightly, but Brandon Peters exiting Saturday’s game in the first quarter didn’t end up nearly as bad as most Illini fans probably thought it would. After suffering a left shoulder/arm injury on a sack, Peters was forced to leave the game, and the Illini were forced to bring in Rutgers transfer quarterback Art Sitkowski.

Despite an 8-20 touchdown-interception ratio at Rutgers, Sitkowski held his own and contributed mightily to the Illinois victory. Sitkowski completed 12 of 15 passes for 124 yards and two touchdowns, and, most importantly, didn’t turn the ball over once.

The Illini could struggle later this season barring the severity of Peters’ injury, but Sitkowski proved the Illini have a real backup QB ready to go when called upon.

Illinois returned 22 super-seniors this season, the most of any school in the country, and their all-around experience helped lead them to a victory. Nebraska committed five penalties for 67 yards, compared to just three for 40 yards for the Illini.

And the penalties came in big moments, too. Between an interception being called back due to a late roughing the passer call and multiple promising drives cut short due to holding or pass interference, the Huskers shot themselves in the foot today by committing too many penalties, something the Illini weren’t nearly as prone to.

I can’t quite give the offense an A due to a slow start, multiple dropped balls and a turnover after a catch, but the Illinois offense more than impressed on Saturday. The offensive line played like the experienced and skilled group they’re expected to be, leading the way for the rest of the team.

Mike Epstein was the leading ball carrier for the Illini, rushing for 75 yards and a touchdown. Almost the full running back group was used for Illinois, and Reggie Love III also made a notable impact with 45 yards.

To my surprise, and probably many others, the wide receiver group also looked just fine. The dropped passes are a concern, but new faces showed that the group should be able to hold its own. Luke Ford, who was rarely used in the passing game last season, caught a touchdown to go along with 30 reception yards. Quarterback-turned-receiver Isaiah Williams had the most receptions with six, totaling 41 yards and a touchdown. Another receiver that used to be in the QB room, Deuce Spann, had the longest catch of the day (which was also his only catch), a 45-yarder to set the Illini up for a touchdown.

This might be harsh considering one score came from the defense. Holding any team to 22 points isn’t bad at all, especially a traditional powerhouse like Nebraska with a good QB in Adrian Martinez, but I thought the Huskers made a lot of their own mistakes on offense, which definitely helped the Illini D.

Calvin Hart Jr. was able to return a ball knocked out of Martinez’s hands for a huge momentum-changing touchdown near the end of the second quarter, which was arguably the biggest play of the game. The Illini secondary also held its own, with Devon Witherspoon making some big plays in the last quarter.

The D-line did a good job shutting down the Nebraska run game, but the main reason the defense didn’t get an A is because of what Martinez was able to do on the ground. The D-line and linebackers did a poor job shutting down Martinez in the run game, as. he had 111 rushing yards, including a 75-yard touchdown run. Overall, though, the Illinois defense looked different than it has over the past five years, and much better for that matter.

This guy is awesome. His first punt pinned the Huskers at their own 1, and another resulted in a safety that, yes, was probably misplayed by Nebraska but was impressive for Hayes nonetheless. He did his job, executed his plan to perfection and showed that he really is one of, if not the best, punter in the country.