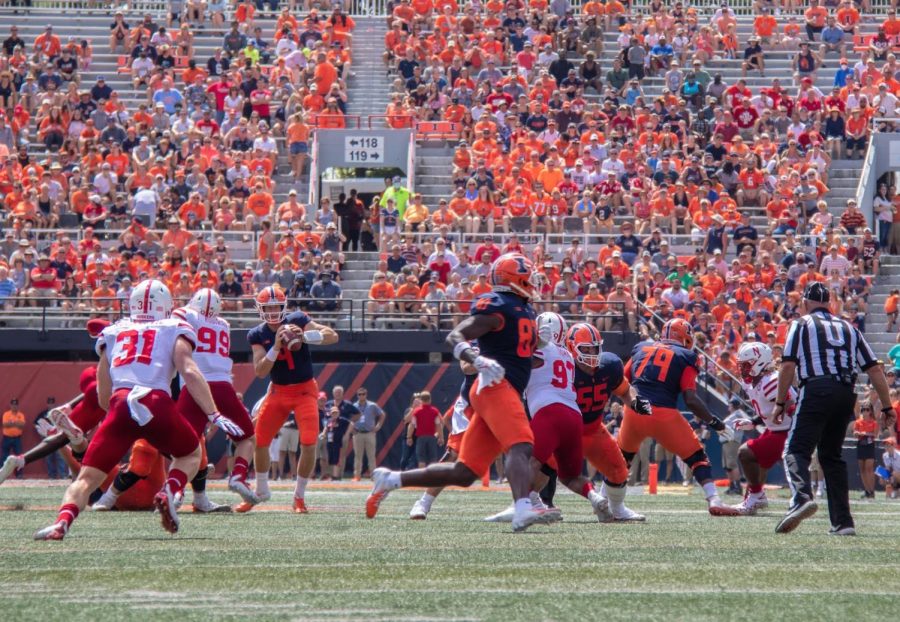 After Brandon Peters left the Illinois game early in the first half on Saturday, the feeling around Memorial Stadium was not exactly positive. The backup quarterback was Artur Sitkowski, a fourth-year transfer from Rutgers, who now was leading the Illinois offensive charge.

Right after Sitkowski entered the game, his stats from Rutgers were trending on Illinois football Twitter, and they did not inspire confidence in the Illini faithful. Over his three seasons with the Scarlet Knights, Sitkowski tossed eight touchdown passes and a whopping 20 interceptions.

During the postgame press conference, head coach Bret Bielema acted naive about Sitkowski’s past while acknowledging the positivity he has brought to the program.

“Well, I didn’t know he had struggles,” Bielema said. “I only know the good things I’ve seen from Art, the way he was recruited, the way he responded every day at practice.”

Despite the odds stacked against the Illini, Sitkowski came out and led the team to an opening win against Nebraska. The New Jersey native went 12-15 with 124 yards and two touchdowns.

Illinois’ game plan was to run the ball, especially after they went up big in the third quarter, but Sitkowski made throws when he needed to. The highlight of his performance came with 4:30 left in the third quarter, as he tossed a 45-yard dime to Deuce Spann, which eventually led to an Illini touchdown.

The third quarter was huge for Illinois, especially after ending the first half with a defensive touchdown. Coming out of the locker room, Sitkowski and the Illini marched down the field in their first offensive drive. After a 14-play, 75-yard drive, Sitkowski found Luke Ford in the end zone to put Illinois up 23-9.

The transfer quarterback knew how big that second-half start was for Illinois and was thankful for everyone on the offense that helped make it happen.

“It was huge,” Sitkowski said. “It was just executing, everybody doing their job and just doing the best to make sure the team was successful.”

Although the only Big Ten game of the week was Illinois against Nebraska, Illini players took home all the major individual awards for the week. Without a doubt, Sitkowski received the Big Ten Offensive Player of the Week. He was obviously happy with his strong debut performance, but overall Sitkowski has been loving the atmosphere in Champaign ever since he set foot on campus.

“I just wanted to do my best,” Sitkowski said. “Coming here in May, I had never been around a group of guys that brought people together. I had come in with three transfers, and we were so amazed at how everyone on this football team just brought us in.”

For any offensive coordinator in their first game with a new team, it is the ultimate nightmare scenario to have your starting quarterback leave the game. Illinois offensive coordinator Tony Petersen loved watching the Rutgers transfer’s performance this past Saturday, but he took some time to recognize the different things Peters and Sitkowski bring to Illini football.

“Where Art’s a little bit different from BP (Brandon Peters) is Art has a big personality,” Petersen said. “The team loves BP; he’s our starting quarterback. But when he went down, the next guy up. Art came in.”

This period in Illinois football could be described as Bret Bielema’s honeymoon phase. His team overcame the odds against a stronger Big Ten opponent in his first game without the starting quarterback. The feeling around Peters being available soon is positive, as Bielema did not rule him out for Saturday’s game.

With no long-standing injury to Peters’ left shoulder, the mood around the Illini camp is that he will assume the starting role once again. Even with Sitkowski’s starting role only being temporary, Illini fans can rest assured that their backup quarterback is capable of stepping in when it matters most.