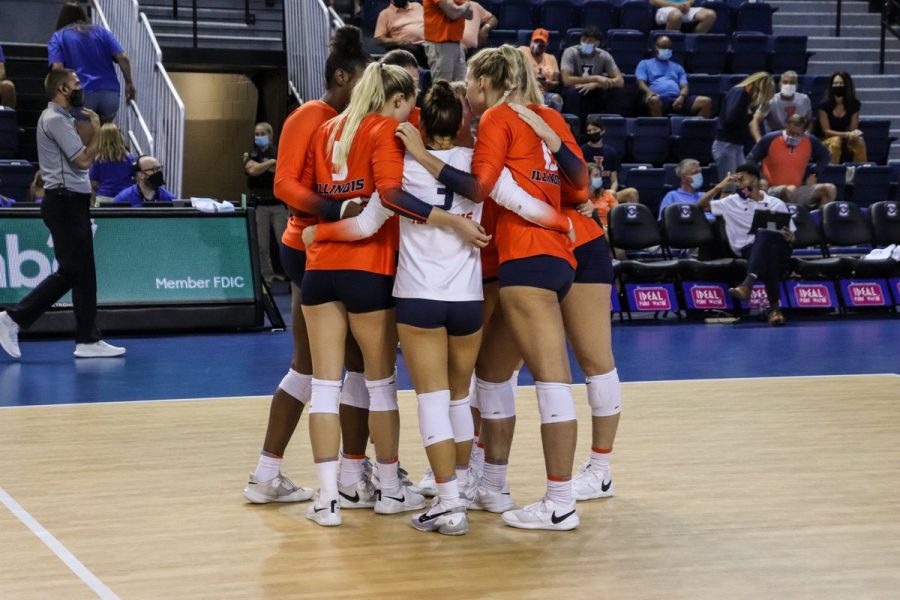 The Illinois volleyball team huddles together during the Bluejay Invitational this weekend. The Illini beat Omaha and Southern Methodist on Friday before falling to host No. 19 Creighton on Saturday.

The Illinois volleyball team traveled to Omaha for the Bluejay Invitational  and played in a trio of matches this weekend. Illinois played Omaha and Southern Methodist Friday, and Creighton on Saturday.

Heading into this weekend’s games, Illinois lost to Colorado and Washington in the Pac-12/Big Ten challenge. Junior middle blocker Kennedy Collins made the all-tournament team, notching 25 kills, eight blocks and five digs over the course of the tournament.

The Illini left Omaha this weekend with a pair of wins against Omaha and Southern Methodist University, but they ended the tournament with a loss against No. 19 Creighton.

The Illini played No. 19 Creighton Saturday morning, dropping the first two sets, 25-18 and 25-16. Illinois tied Creighton a couple times in the third set and took the lead toward the end, ultimately winning, 27-25.

In the fourth set, Illinois was down, 21-15, before and was down 23-16, before going on a seven-point scoring run. The Illini’s rally was not enough, as Creighton went on to win the set, 33-31, and the match, 3-1.  Graduate student outside hitter Megan Cooney led the Illini with 17 kills, and Kuper had 29 digs in the loss.

Illinois next plays Missouri Friday in Normal for the Redbird Classic, while it will also play host Illinois State and North Texas over the course of the weekend.