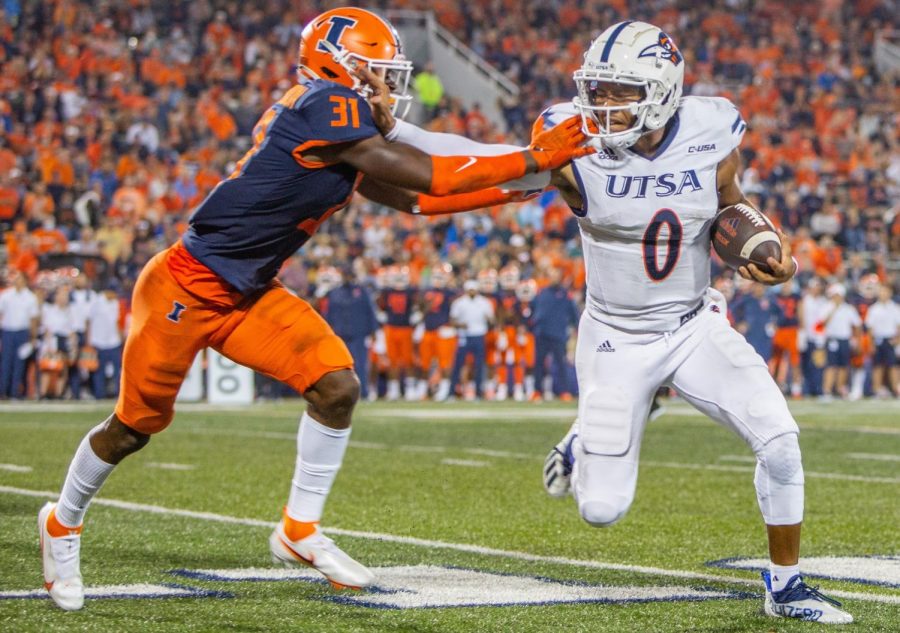 Devon Witherspoon attempts to push a UTSA receiver out of bounds during the game against the University of Texas at San Antonio on Sept. 4. Witherspoon and the Illini secondary struggled against a high-powered Virginia offense on Saturday.

It’s no secret that the Illini struggled defensively under former head coach Lovie Smith. In his final year in Champaign, Illinois ranked last in the Big Ten in passing yards allowed, with opposing teams averaging 230.1 yards through the air per game.

When Bret Bielema — along with Ryan Walters, who the Illini pried away from Mizzou — arrived on campus, it seemed like the program was turning a corner.

After winning their first official game under Bielema, the Illini looked to be flying high. Though the team only won by eight, Illinois looked legit. Losing Brandon Peters to a shoulder injury in the first half, the Illini offense didn’t skip a beat en route to 30-22 to Big Ten West foe Nebraska.

But Cornhusker quarterback Adrian Martinez’s throwing and running abilities foreshadowed future defensive vulnerabilities, as he threw for 232 yards while adding 111 yards on the ground.

Things didn’t get any easier against the University of Texas at San Antonio, which boasted Frank Harris, a fifth-year quarterback who was named to the Davey O’Brien Award and Manning Award watch lists prior to the season.

Despite being the underdog, UTSA looked commanding from start to finish, and that was in part due to the dominance of Harris, who went 20-for-32 with 280 yards and a touchdown, along with a fierce trio of Harris, Second-Team All-American Sincere McCormick and Brenden Brady that racked up 237 yards and three touchdowns on the ground.

The Roadrunners accumulated 497 total yards of offense and converted nine of 14 times on third down, something Bielema acknowledged was an issue following the game.

Entering a matchup as the underdog for the first time this season, Illinois traveled to Charlottesville to take on Virginia for the team’s first road test of the season.

Cavalier quarterback Brennan Armstrong immediately exposed a dismal Illini secondary, throwing for 171 yards and two touchdowns by the end of the first quarter.

It only got worse from there for Illinois, as he tallied 251 yards and three touchdowns by halftime and eventually finished with 405 yards and five touchdowns.

Though Illinois forced two turnovers in the fourth quarter — a Jake Hansen forced fumble and recovery and an interception by Kerby Joseph — the damage had already been done, as the Illini were trailing by three touchdowns by the time either of those plays occurred.

Devon Witherspoon and Tony Adams, two of Illinois’ top guys at the defensive back position, struggled immensely against the Cavaliers, as five different Virginia receivers went for at least 50 yards. The hosts averaged 15.1 yards per pass completion, and it seemed like the Illini were constantly out of position and giving up huge plays over the top.

Not only was the secondary all over the place, the defensive line looked nonexistent. Armstrong consistently seemed like he had all day to find his receivers, which he did with relative ease.

With time running out and the game already out of hand, the Illini defense humiliated themselves even further with late, unnecessary penalties.

“There’s just a lot of different things that we’ve got to get better at, and we’ve got to continue to reach high expectations as coaches,” Bielema said. “Obviously, I know all players have even higher ones, so completely unacceptable, especially some of the reactions late in the game that we can’t have.”

Missed tackles, missed reads and miscommunication have Bielema and the Illini in a tough spot ahead of a Friday night showdown with Maryland at Memorial Stadium.

The Terrapins have weapons of their own in quarterback Taulia Tagovailoa and wide receivers Dontay Demus and Rakim Jarrett. The alarm bells are going off on this Illinois defense, and the schedule isn’t going to get much easier.

This team needs to sort its issues out before Friday, or else this Illinois team is going to get exposed once again.