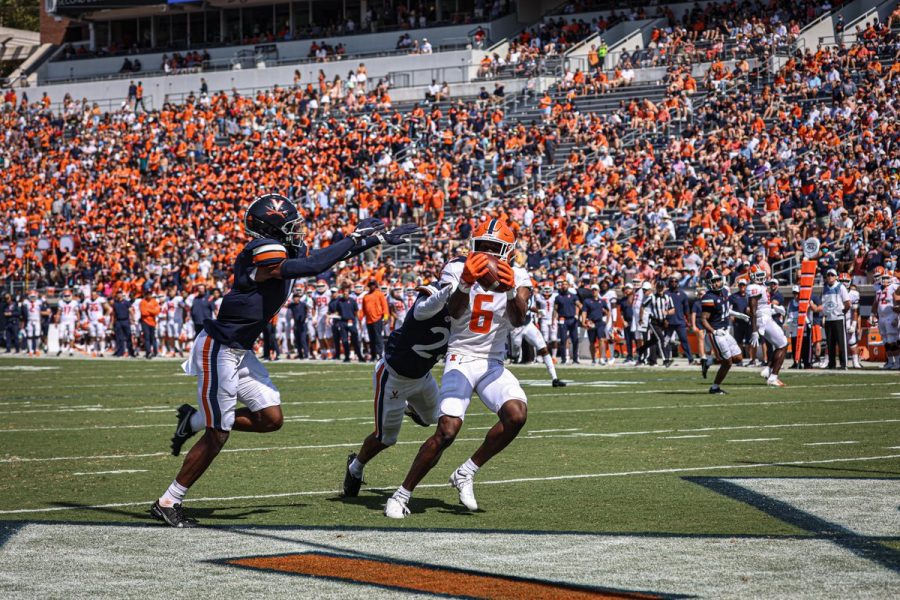 Deuce Spann makes a touchdown catch during the game against Virginia in Charlottesville on Saturday.

The Illini lost their first road game of the season 42-14 to Virginia behind dominant quarterback play from Brennan Armstrong.

Armstrong went 27-36 for 405 yards and 5 touchdowns en route to an absolute drubbing of the Illinois secondary.

“Unacceptable coaching and reaction that the other guys had to adversity,” said head coach Bret Bielema. “That was not what we were looking for, so we’ll address this as soon as tomorrow.”

The Cavaliers opened the game hot, scoring quick touchdowns on each of their first two drives. It only took four plays on the first scoring drive, with tight end Jelani Woods corralling in two long passes, including a 32-yard touchdown grab.

Illinois responded quietly, with a three and out on its first drive before the Virginia offense got back on the field and executed a second scoring drive that looked eerily similar to its first. Two long passing plays highlighted the drive, with Armstrong hitting receiver Ra’Shaun Henry for a 39-yard pass before connecting with Dontayvion Wicks for a 28-yard touchdown pass.

Illinois continued its trend of starting slowly, only managing 33 total yards of offense in the first quarter. Artur Sitkowski got his second start at quarterback this week, but he struggled to maintain the production he had when he initially filled in for QB1 Brandon Peters in Week 0.

The Illini finally got a stop on Virginia’s third drive, when kicker Justin Duenkel missed a 46-yard field goal attempt.

Illinois began to settle in during the second quarter, in which it opened with a long drive down the field for a touchdown. It was primarily done through short passing and rushing plays, but ultimately Sitkowski connected with receiver Deuce Spann with a dime for the 33-yard touchdown.

The Illini ultimately struggled to muster much more offense going into halftime, managing only one first down on their next two drives. Meanwhile, Virginia continued to carve up a dismal Illinois secondary.

One cause Bielema cited for Illinois’ dismal performance was a lack of confidence.

Following Illinois’ sole scoring drive, Virginia reeled off a five-minute drive which resulted in another missed field goal, this time from 31 yards. However, with the Illini unable to generate offense, Virginia got the ball right back with four minutes remaining in the half and built a touchdown drive to go up 21-7 going into the half.

The second half opened in contrast from the first, with the Illini immediately moving down the field and scoring on a 21-yard Chase Brown run.

This may have been the highest point of the game for Illinois, as Virginia immediately responded with its own touchdown drive. The Cavaliers stifled any momentum the Illini may have garnered by forcing a three and out on their next possession, and kept the Illini scoreless the rest of the quarter.

Virginia continued to run up the score with a march down the field for another touchdown to go up 35-14. Illinois couldn’t get much going offensively in the fourth quarter, and as the game fell out of reach things began to get chippy between the two teams. The Illini committed three penalties on Virginia’s next touchdown drive, which put them up 42-14.

Despite forcing two fourth-quarter turnovers, the Illini dug themselves into too deep of a hole and lost by four touchdowns.

The penalties toward the end of the game were a point of emphasis for Bielema afterward. He repeatedly called the frustrated reaction by the team unacceptable.

“I look at where we were in that first game; we had four penalties if I’m not mistaken,” Bielema said. “I think we might have had four penalties on one drive (today). When it rains, it pours. Again, it’s not what happens; it’s how you react to what happens and the clarity of that. Even myself, I need to make sure that I handle the moment and react to what I see. The thing that I see in my players, I think there are some teaching moments today that will be  even more maximized tomorrow in our film session.”