Former Illinois players look to impress during the 2021 NFL season 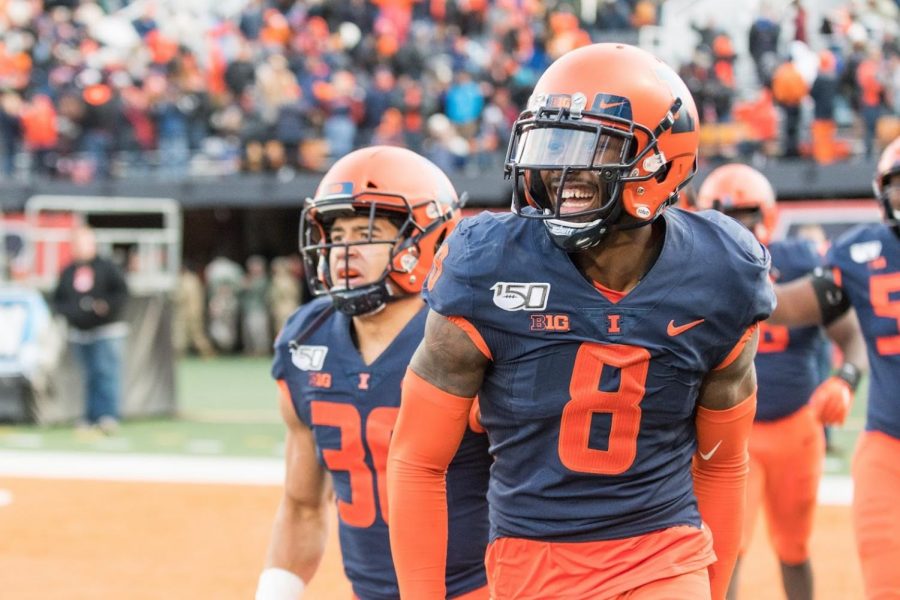 Illinois cornerback Nate Hobbs celebrates a fumble recovery and touchdown during the game against Rutgers. Hobbs will be playing his rookie season with the Las Vegas Raiders in the NFL.

After beating out Cody Parkey in training camp, Chase McLaughlin will be the starting kicker for the Cleveland Browns this season. McLaughlin hopped around to several different franchises after going undergrad in 2019 before ending up with the Browns this season. Heading into the Browns week one matchup against the Kansas City Chiefs, he is listed as questionable due to a right hamstring injury.

Entering his 10th season with the Texans, Whitney is one of the marquee players on the Texans defense. After JJ Watt’s departure this offseason, Mercilus is the longest tenured player in Houston. However with the team undergoing a rebuild now, he may not be with the team much longer. The Texans open up their season against the Jacksonville Jaguars.

With the Jacksonville Jaguars, most people are focusing on their new-look offense that features number one pick Trevor Lawerence, however their defense has some strong pieces. Back in the third round of the 2017 draft, the Jaguars selected Smoot and after four solid seasons, he received a contract extension. Along with putting up numbers on the field, the former Illini is known to be a positive locker room presence.

Ward was selected by the Oakland Raiders during the second round of the 2016 NFL Draft, and after hopping around the league, he signed a one year deal with the Jaguars this offseason.

Protecting Patrick Mahomes is a tall task in the NFL, and former Illini Nick Allegretti has done a great job doing so ever since he entered the league. Allegretti was picked in the seventh round of the 2019 draft, and after making his first start in 2020 he hasn’t looked back. The 25-year-old will play a vital role in the Chiefs offensive success this season.

Hobbs was selected this year in the fifth round by the Las Vegas Raiders. The Louisville, Kentucky, native had a strong showing in the preseason and will start at corner for the Raiders in week one against the Ravens.

Fejedelem joined the Miami Dolphins this offseason after spending five years with the Cincinnati Bengals. The former seventh round pick was a team captain for the Bengals, where he was not inactive for a single regular season game. Fejedelem will take his leadership qualities and strong play to the Dolphins organization, where he has already been named a special teams captain.

Karras returned to New England this offseason after signing a one-year contract. The Indianapolis, Indiana, native spent his last season with the Miami Dolphins, where he started all 16 regular season games at center. Karras will likely assume this position with the Patriots for their week one matchup against the Dolphins.

Justin Hardee signed with the New York Jets this offseason on a three-year $5.25 million dollar deal. The 27-year-old began his career as a wide receiver with the New Orleans Saints, however he transitioned to cornerback while in the NFL. Hardee has clearly had a strong first impression with the Jets organization, as he has been named one of the team captains.

With their third round selection in the 2021 NFL Draft, the Steelers chose former Illini Kendrick Green. Although it may seem to be a tough task, Pittsburgh chose Green with the idea of him being the replacement for recently retired Pro Bowl center Maurkice Pouncey. Both players share lots of similarities, as they display an intense personality on the field.

Since being drafted by the Patriots in 2012, Wilson has been a staple in several NFL defenses. After spending time with the Patriots, Lions and Colts, Wilson signed with the San Francisco 49ers this offseason one a one-year deal. He will look to impress as the 49ers start off their season against the Detroit Lions.