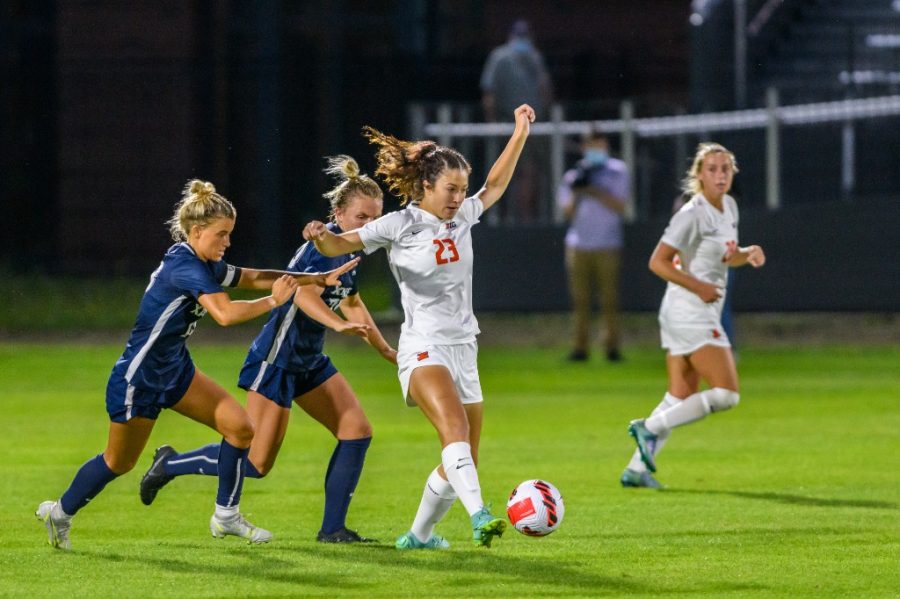 Freshman Maeve Jones kicks the soccer ball during their game against Xavier on Sept. 2. Maeve Jones scored a goal within 15 minutes of the game.

The Illini are coming off a huge boost of form after getting yet another five-goal thriller, marking it the second one this season.

A change and improvement in both the attack and defense worked well for the Illini. They were able to lock down the Falcons when on the attack and had the chance to run into the attacking third with confidence.

Thursday night saw small changes for the Illini, which turned out to work in their favor. Maeve Jones earned her first start sitting at the main striker position, and within 15 minutes, she snagged the first goal of the game.

Kendra Pasquale moved back into the attacking midfield position to take advantage of her work rate as she could defend and attack.

Another versatile player, Sydney Stephens, started at defensive mid but slowly merged into the attack, bagging a hat trick of assists.

Usually in the backline, Joanna Versoza-Dolezal subbed into the defensive mid position to add some communication up the field. Although not intended, the Canadian was able to score her first goal as an Illini from long range.

The last and major change was Naomi Jackson getting subbed into the net. This season has seen primarily Julia Cili step in, but after getting put on concussion protocol following the Xavier match, she did not travel to Ohio and it is unknown when she will return.

Defensively, Illinois found its groove after failing to contain a heavy attack the last couple of games. With frequent switching between Verzosa-Dolezal, Aleah Treiterer and Angie Galo, the Illini couldn’t find the consistency needed.

“Our backs found the balance between dropping off too much and letting them play in front of us, and I thought that they did a really good job of putting pressure,” said head coach Janet Rayfield said after Thursday night’s win against Bowling Green.

Now adding the trio in a triangle allows Versoza-Dolezal’s vocal leadership, Treiterer’s speed to run opponents down and Galo’s ability to feed the ball through play to combine and play to all of their strengths.

The Illini will spot a similar face on the opposing side as goalkeeper-turned-assistant coach Jaelyn Cunningham recently began her reign as a Rocket.

In her goalkeeping years, the 2020 graduate was named to the All-Second Team Big Ten list in 2018 and ranks No. 2 in Illini soccer history with 106 saves.

Overall, the Rockets have yet to lose a game this season and are currently on a three-game winning streak. As of writing this, they have yet to face Indiana State, but that will be happening Friday night.

Toledo began the season with two draws and then overpowered Oakland, earning a 6-1 win and propelling it into the streak it has now.

This will be the last test and preparation before Illinois start its Big Ten season against Michigan.

“We gotta come out and put together a game plan and be as dangerous as we were tonight (Thursday),” Rayfield said. “We gotta be dangerous again against Toledo on Sunday, and hopefully this game gives us the mindset and confidence to do that.”