Notes, players grades: Illini struggle on both ends of the ball in loss at Virginia 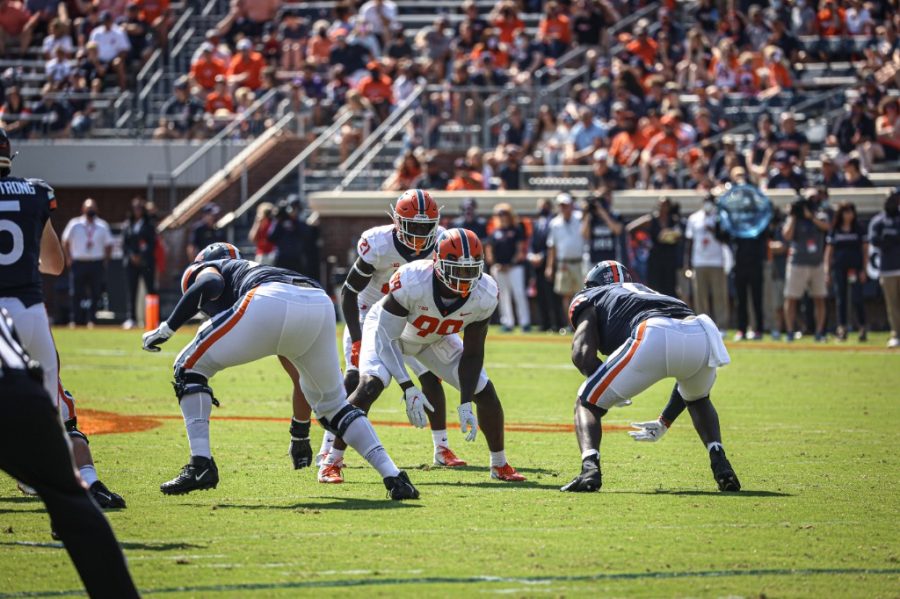 Owen Carney gets set before a play during the game against Virginia at Scott Stadium in Charlottesville on Saturday. The Illini struggled offensively and defensively against the Cavaliers, and they have lots of things to sort out before returning to Big Ten action on Friday night.

In what was the first road test for the team under Bret Bielema, the Illini were dominated on both ends of the ball, falling to the Virginia Cavaliers, 42-14.

Virginia started the game by scoring two touchdowns in the first four-and-a-half minutes of the game, and it never looked back. Despite Illinois cutting into the lead at times and trailing by just seven in the middle of the third quarter, the Cavaliers went on a 21-0 run to end the game and claim victory.

We knew the Illinois secondary was going to be a major area of concern, but I didn’t expect it to be this bad. It seems every year the Illini tend to get beaten by throws up the middle, and the Cavaliers put on a passing clinic Saturday.

Quarterback Brennan Armstrong torched the Illinois defensive backs for 405 yards and five touchdowns, finishing with a QBR of 85.1. His five scoring passes went to four different receivers, and five Cavaliers ended with over 50 receiving yards.

If the Illini want any chance of succeeding in Big Ten play, or even winning another game, the secondary has to be better. Devon Witherspoon and Tony Adams, two of the bigger names in the group, have to step up and start preventing as many deep balls as they’ve been giving up.

Clock running out on Art

He was great in his first game against Nebraska, but Art Sitkowski has regressed each game since under center for Illinois. Today, Sitkowski threw the ball 45 times and had just 24 completions for 221 yards, a touchdown and a pick.

He isn’t terrible. And it is worth noting that the receiver group is a weakness for the Illini, which was put on display today with several dropped balls. However, missed throws and reads are inexcusable in games like this.

He has an offensive line that tends to give him enough time, yet still, Sitkowski will hold on to the ball too long on some plays and take sacks. If he’s healthy next week, it better be Peters’ time again in Champaign, because defenses seem to be figuring out Art Sitkowski fast.

The rush game was fine.

Having Chase Brown back helped, and his play did make a difference offensively. Brown averaged nearly six yards per carry, finishing with 41 yards and a touchdown run. Jakari Norwood, Chase Hayden and Josh McCray were also each efficient when handed the ball, but the Illini only elected to run the ball 27 times.

The passing game was just awful. Missed catches, missed throws and missed reads were the name of the game. Virginia is supposed to have one of the lesser defenses in the ACC, and still, Illinois was only able to score 14 points.

Whether it’s running the ball more, getting Peters healthy or a different factor, something’s gotta change next week for Illinois to put more points on the board moving forward.

I’m not giving them an “F” due to the forced turnovers, but at the end of the day, they didn’t matter at all.

The pass defense was awful. The defensive line had a bad day. Almost everyone on the field missed tackles, including Jake Hansen, who was one of the league’s best tacklers last season.

There isn’t a ton to say, other than that it was an awful effort all around. Like the offense, the defense has a ton to figure out moving forward if it wants to succeed. Saturday’s play at Virginia was terrible to watch, and it is hard to imagine it getting any worse moving forward, which in a weird way is just about the only positive thing I have to say. It shouldn’t get worse.

Best player on the team. Best punter in the country.