Stephens gets game-winning goal in physical match against Toledo 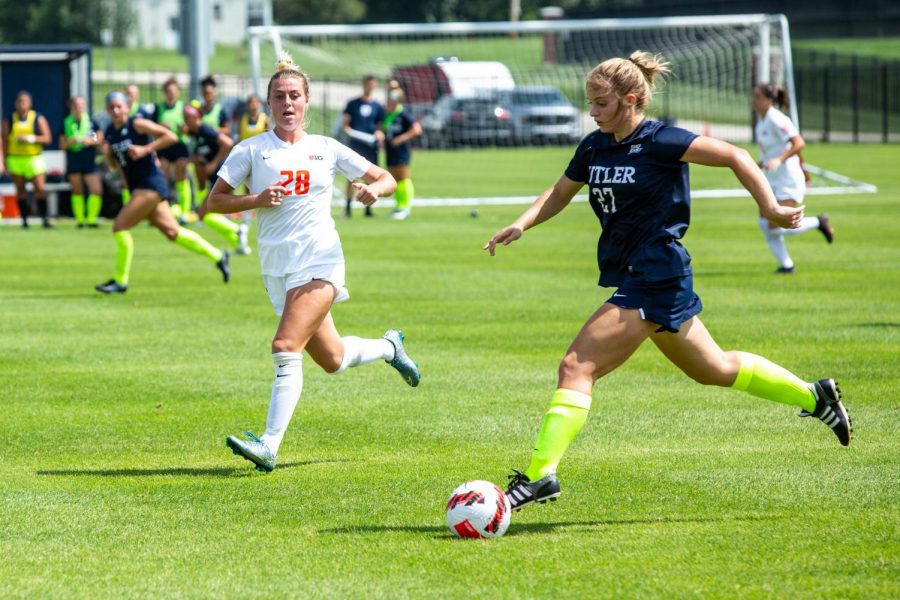 Midfielder Sydney Stephens runs along side her Butler opponent in an attempt to steal the ball during their game on Aug. 29. Stephens scored the winning goal in the Illinois soccer game against Toledo.

A back and forth match between Illinois and Toledo ended with Sydney Stephens scoring the game winning goal to get the 1-0 win and finish off non-conference play.

“As a gritty, physical battle it wasn’t the prettiest of soccer games, but most certainly was a game where two teams battled for every ball, battled for every chance and I think one of those wins that we kept at, kept at it, kept at it and finally found a way to get the ball in the back of the net,” head coach Janet Rayfield said.

The Illini were riding high on momentum after overpowering Bowling Green in a 5-1 win Thursday night.

However, Sunday afternoon was a much different game for Illinois. Toledo didn’t let their home field get taken over and put on strong and physical performance.

From the start, Illinois had a strong display after getting great chances at goal to test Toledo early.

“Us putting away those chances early would have changed the dynamics of the game,” Rayfield said.

She also mentioned that keeping a team like Toledo at a scoreless match gives them the confidence to defend and attack better. As seen Sunday afternoon their confidence slowly rose and got them a couple of good chances at goal.

After the first five minutes, Toledo began to settle into the match and slowly started to play level with Illinois.

In the seventh minute, a pass from Toledo fell into the path of a wide open Stephanie Currie, but Naomi Jackson came off her line to make the save.

The first half was a lot of build up play between both teams to be the first one up on the scoreboard.

Toledo and Illinois were fighting hard on both ends of the field, which resulted in a total of 15 fouls and one yellow card for each team.

Second half came around and Toledo started off on the right foot, nearly what Illinois did in the first 45.

Although the Illini started with the ball, the Rockets already had their first chance within the first 20 seconds. A long ball to Currie fell in the right path into the box, but Summer Garrison was able to lock her down quickly so Jackson could pick the ball up.

Toledo controlled much of the second half and their pressure on Illinois caused several mistakes. However the Rockets couldn’t turn those mistakes into goals, which the Illini made them pay for.

The last 20 minutes of the game was still tied and Illinois was looking to really make their chances count in order to break the deadlock.

It first started with Ashleigh Lefevre in the 71st minute running onto a pass and taking a shot just right in the box, but it sailed over goal.

One minute later Stephens had a go, but it was right at goalkeeper Emma Boutorwick for an easy save.

Another chance this time for Breslin again was right at Boutorwick, and Illinois were plagued with shots going right at the keeper for an easy stop.

Then in the 78th minute, a high kick was called on Toledo right on the penalty spot. An in-direct freekick from Illinois took three chances at goal before the ball ended up behind the net.

Breslin’s initial shot was saved, then Maggie Hillman had a go, and then it fell to Stephens and her shot rolled past Boutorwick for her first goal as an Illini.

“They (Toledo) really didn’t allow us any time on the ball. It’s a narrow field, turf surface so the ball doesn’t stay on the floor really easily so they just never gave us time on the ball. They’re individual defending I thought was very good today so they didn’t get 1 v.1 so we really had to combine around them and get people around the ball and certainly made difficult for any one person to get free,” Rayfield said when talking about what Toledo did well during the game.

Illinois finished nonconference play with a 4-3 record and will travel to Michigan to open their Big Ten season on Friday.