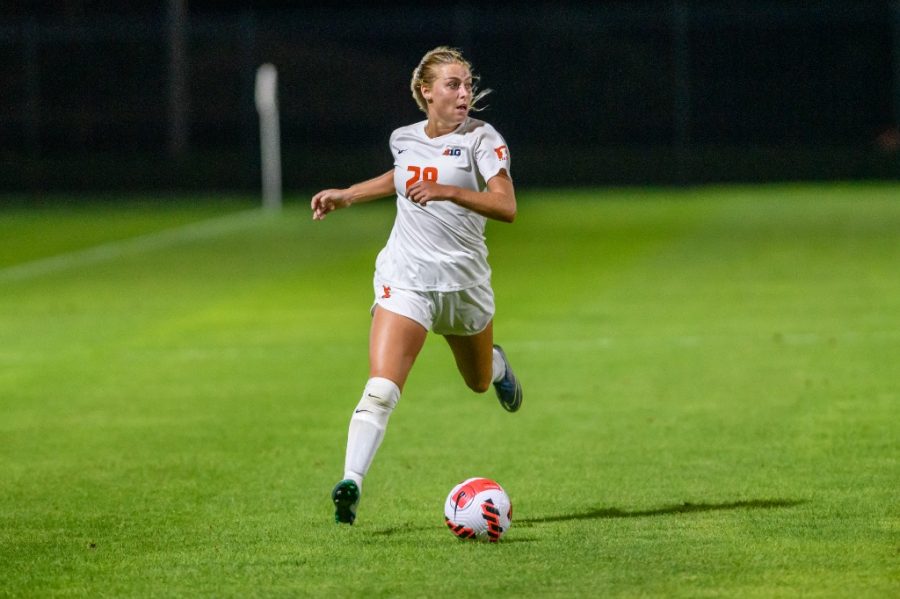 Sydney Stephens dribbles the ball and looks for teammates during the game against Xavier on Sept. 2. After transferring from Georgia, Stephens has already settled into her new home in Champaign, bagging five assists through seven games.

Head coach Janet Rayfield isn’t known for dipping into the transfer portal for players, but when Sydney Stephens’ name appeared, the coaching staff knew they had to jump on the opportunity.

“Sydney was someone we recruited very strongly out of high school, and Syd was someone we felt like would fit into our program, would fit well with everything about her in terms of her competitiveness and the way that she’s a student of the game,” Rayfield said. “One positive out of that situation is that she technically still comes in as a freshman, so we still have that opportunity to invest in her and develop her.”

Although a native of Waterloo, Illinois, Stephens chose to head down south to play for Georgia in the Southeastern Conference for her first year.

Eight hours away from home gave her a lot of room to experience growth as a player and a person.

“It was probably the year I did the most growing, the most learning, individually and in a team system,” Stephens said. “Kinda went in and went to work right away, and it was rough, obviously, for a freshman year, that COVID year, I was quarantined four times. I missed the SEC tournament and had mono in the fall. So it was definitely rough, slow going at first and I felt like I was always getting into a routine until something else would kinda pop up.”

Everything wasn’t perfect for Stephens being a Bulldog. Sure, she was playing and starting for a great team, but retaining consistency on the field and the philosophy of Georgia wasn’t for her.

Although she had thoughts about staying, she also thought about the future and if Georgia would give her the experience and tools needed to continue soccer after her four years.

“As I went through last year and did eventually decide to enter the transfer portal, I just kinda had to nail down what I wanted out of my next four years,” Stephens said. “I have goals and aspirations that go beyond the next four years in the game, whether it be coaching it or playing pro. And for me, I wanted to put myself in the best possible position to be able to do that.”

With her name in the portal, she was open to any options as long as she had one thing: soccer.

Nearly three years after losing the chance to sign Stephens out of high school, the Illini had a second opportunity and wanted to make it count.

“When a school like that values you in the first place and then they still value you the second time, it really just shows their respect for you as a person and as a player,” Stephens said. “I think that showed me a ton about who the people are here and what this program is all about. They know who I am as a player and who I am as a person, and I’m going to work for them 110%, every single day of being here in this program, at practice and in a game because they fought for me twice.”

Although the Illini always keeps tabs on the portal, they never really have the intent to bring in someone, unless they can have the time to be developed or can fix a void that can’t be filled by a freshman.

“We bring people in and really work to develop them and don’t look for that sometimes quick fix to bring someone in,” Rayfield said.

For Stephens, she was the perfect transfer, as she had just finished her freshman year, and due to the NCAA COVID-19 eligibility, she was able to retain her first-year eligibility.

So far, the Waterloo native is settling well in Champaign and can call it her home away from home.

“It’s just like home — cornfields everywhere — so you gotta nice piece of home; it’s nice to be back in the Midwest,” Stephens said. “Getting comfortable as a transfer, there is no place like Champaign because it’s home.”

With a mere two months on campus, Stephens has already fallen in love with the atmosphere, especially with the coaching staff, players and the recently built Demirjian Park.

“It has been one of the best transitions I’ve ever had in terms of making it my home,” Stephens said. “The food is great, campus is great, professors are great; it really is, truly, just I’m loving life.”

Now seven games into the season, Stephens has found her place in the attacking midfield spot beside Maggie Hillman and in front of the defensive midfielder.

But don’t be surprised if you see her play different positions within the attack later in the season. Although up to Rayfield, Stephens does have the ability to play in any position in the front six.

“She definitely has some versatility, but when you put her in the midfield, that versatility turns into mobility, so some of the good moments that we have is the interchange that her movement creates,” Rayfield said.

At the age of 13, Stephens was interviewed by her local newspaper, and she mentioned that her dream was to play for North Carolina.

Obviously she didn’t get that wish, but within her first couple of months as an Illini, she has already had the opportunity to play against the Tar Heels and play for a coach who was a star player there.

“She (13-year-old Sydney) definitely values Janet’s expertise and knowing how knowledgeable Janet is about the game because I want to coach at the end of the day is something I really value in a role model, and Janet is a huge role model in my life,” Stephens said.

Even within the first month of competing in an Illini uniform, Stephens has been a star performer. Getting involved in all seven games so far, she has bagged five assists, including three against Bowling Green, and has scored a game-winning goal in Toledo.

Stephens has four more years under her belt, and with a bright future ahead of her, there is a lot she can build upon with the start she’s been having.