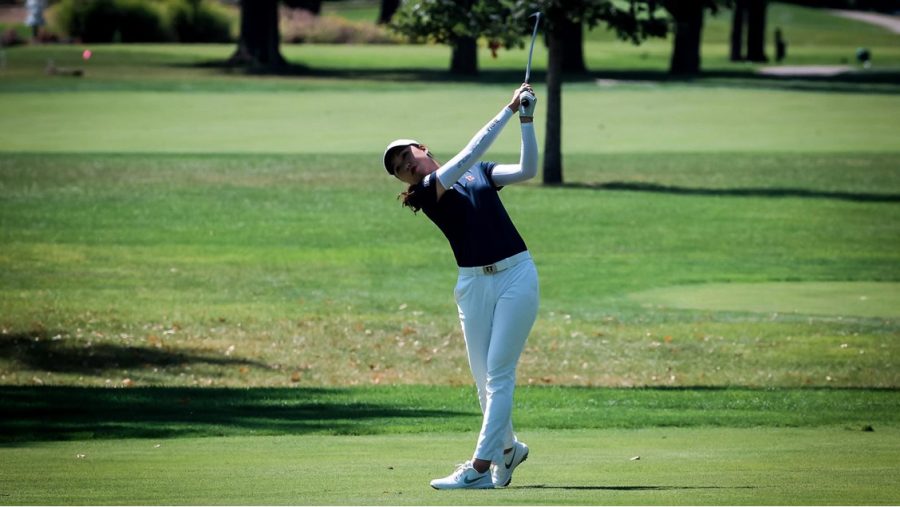 Junior Siyan Chen swings at a golfball at the Wolverine Invitational. Illinois placed top five at the match.

The Illini women’s golf team traveled to Ann Arbor, Michigan for the Wolverine Invitational hosted by the University of Michigan. Illinois took a fifth-place finish behind Michigan, Virginia, Virginia Tech and Iowa State.

With Illinois taking a fifth-place finish in the tournament on Monday and Tuesday, the season looks bright for the Illini after they only had one top-five finish last season. The 2020 fall season was canceled, which means the Illini are trying to make a statement in their first fall season since 2019. Illinois stepped into Wolverine territory and finished with 878 strokes, coming 27 strokes behind Michigan’s 851 (-1).

Junior Siyan Chen and senior Crystal Wang both stepped up for Illinois, as both secured a top-10 finish. Chen took home a third-place finish, while Wang also had a great outing and finished with a tie for eighth place. Chen managed to put together a career-best finish while having her lowest score ever in a 54-hole event.

Chen and Wang weren’t the only Illini standouts, though, as senior Kornkamol Sukaree, sophomore Isabel Sy and freshman Lexanne Halama all gave Illinois the push in the final round. Sukaree managed to be tied for 33rd place, while Halama rallied for a 53rd-place finish in her first college meet.

As a team and individually, Illinois has been trying to step up to the challenge this year since expectations are set high. This was the first event of the year, yet they have added a top-five finish to their accolades.

Illinois will now prepare for the Schooner Fall Classic at the Belmar Golf Club in Norman, Oklahoma on Sept. 26-27. This event will be hosted by University of Oklahoma, which also just secured a fifth-place finish in the Sam Golden Invitational. With both Illinois and Oklahoma finishing in the top five in their respective season openers, this next event is about to be a dog fight.