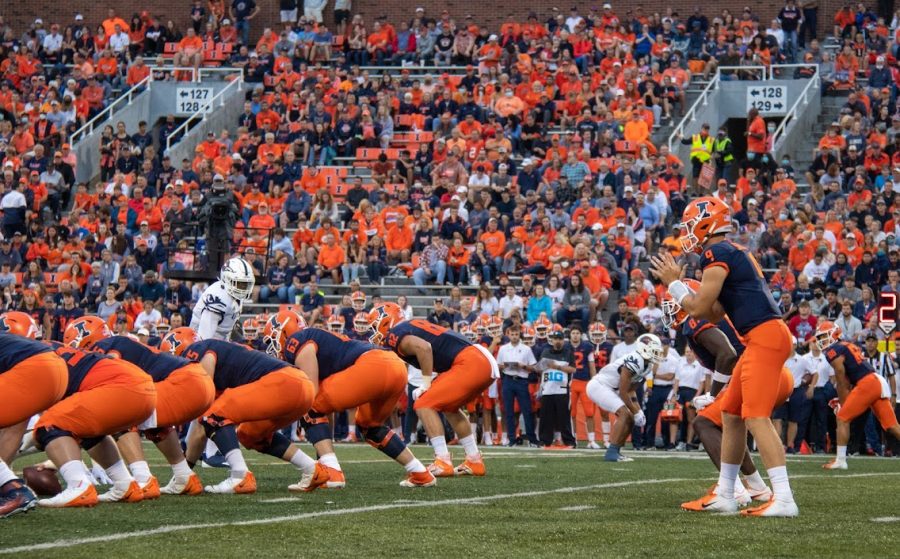 Quarterback Art Sitkowki prepares for the snap during Illinois’ game against the University of Texas at San Antonio on Sept. 4. The Daily Illini sports staff made some predictions ahead of the team’s Friday night matchup against the Maryland Terrapins.

Illinois has struggled offensively and defensively in two consecutive losses, with the Illini falling to the UTSA Roadrunners, 37-30, at Memorial Stadium and getting blown out on the road against the Virginia Cavaliers, 42-14, last weekend.

Brandon Peters’ return has things looking up for Illinois, though it will take on a dangerous Maryland team that has only allowed 24 points through two games this season. With several weapons on offense, the Illini will need their defense to improve after allowing 42 points and 556 total yards last week against the Cavaliers.

Once again, The Daily Illini sports staff made some predictions ahead of the Illini’s Friday night showdown with the Terrapins.

For the second consecutive week, I have to pick against the Illini. Maryland not only boasts a talented quarterback in Taulia Tagovailoa, it also has a dangerous receiving duo of Dontay Demus Jr. and Rakim Jarrett and a talented running back in Tayon Fleet-Davis. After allowing 556 total yards — including 423 through the air — against Virginia last week, that doesn’t bode well for a struggling Illinois secondary.

The return of Brandon Peters certainly generates a sense of optimism for the offense, but the Terrapins will be too much to handle for this Illini squad, and former Illinois coaches Michael Locksley and Ron Zook will return to their old stomping grounds with a commanding win.

I’d cautiously take Illinois narrowly beating Maryland, 33-30. While the last two weeks have been uninspiring on the defensive side of the ball, Brandon Peters is returning this week and should make it easier for the offense to get on the board. The Illini found a way to beat their first Big Ten opponent when they played Nebraska, and I’d suspect they attack their second conference matchup with similar focus.

The Terrapins boast a strong secondary, which means the Illini may look to the run game if Peters can’t establish himself quickly. Maryland has a balanced offensive attack, so it may look to exploit Illinois’ pass defense, which currently ranks worst in the Big Ten by quite a bit.

Brandon Peters is back in at quarterback for the Illini after missing the last two games. This will surely boost Illinois’ offensive numbers, but it’s facing off against a very strong Maryland side.

Maryland’s Taulia Tagovailoa has been on fire for the Terrapins so far this year, and he is averaging 9.6 yards per pass attempt and 606 passing yards to go alongside six touchdowns and no interceptions.

Illinois’ defense struggle mightily against Virginia, and those woes will continue on Friday. Expect Maryland to dominate from start to finish in this one.

With the juggernaut offense I expect Maryland to have this year, this one could get ugly for the Illini. Taulia Tagovailoa has impressed thus far this year, averaging just over 300 passing yards a game to go along with six touchdowns in two contests, showing that there are two extremely talented quarterbacks in the family. He’s also got two stud receivers in Dontay Demus Jr. and Rakim Jarrett to throw to, who each have two touchdowns so far on the young season.

Since Illinois’ secondary has given us no reason to believe they can slow down a good passing quarterback with skilled receivers to throw to, I don’t think the Terrapins will have any trouble scoring Friday night.

Brandon Peters is back and starting under center for the Illini, which I believe is an upgrade from Art Sitkowski. If he uses his best players, Isaiah Williams and the tight ends, and Chase Brown gets some good carries behind the o-line, I think Illinois can put up some points. The student section will be sold out once again at Memorial Stadium, and energy will be high under the lights, so I do predict that to translate to a high-scoring affair. However, it’ll ultimately be Maryland running away with it in the second half against an Illinois secondary that just isn’t very good.

Aside from location, this game feels like it will be a carbon copy of what occurred last Saturday in Charlottesville, Virginia.

Maryland comes into the game with some momentum, as it knocked off rival West Virginia in week one. A big reason why it has found success early on is because of its passing attack, led by quarterback Taulia Tagovailoa, the younger brother of Tua.

People may forget, but Tagovailoa and Maryland — although incredibly inconsistent — showed flashes of brilliance last season, as they hung up 37 points against Penn State and 45 against Minnesota. But consistent cancellations because of COVID-19 outbreaks halted the Terrapins’ season.

Maryland, arguably, has one of the strongest wide receiver corps in the conference, which doesn’t generate excitement for Illini fans. I have a hard time believing Illinois can stop this offense on a consistent basis. If it’s 3rd and 6, Tagovailoa will secure a first down.

The one aspect where I do have faith, though, regards Maryland’s less-than-stellar run defense. Although they held West Virginia to 73 yards rushing, the Mountaineers averaged over four yards a carry. Last season, Maryland allowed over 230 yards on the ground per game. While Illinois hasn’t run the ball as well as some may have hoped this season, this is a perfect opportunity to turn the tide and eat clock against the air-raid attack.

If the Illini want to end their losing streak, they need to rush for at least 250 yards. However, I don’t have faith that they can stop Tagovailoa.

Illinois has lost two consecutive games to UTSA and Virginia in the last two weeks. Illinois was favored in the former and not in the latter, ultimately losing both.

The Illini enter Friday night’s game as underdogs, and they have not defeated the Terrapins in program history — the Illinois record book notes the only matchup between the teams was in 2018, a game Maryland won, 63-33.

Maryland is very likely to leave Champaign with a win, but it likely won’t be a blowout on the scale to the one we saw in 2018.