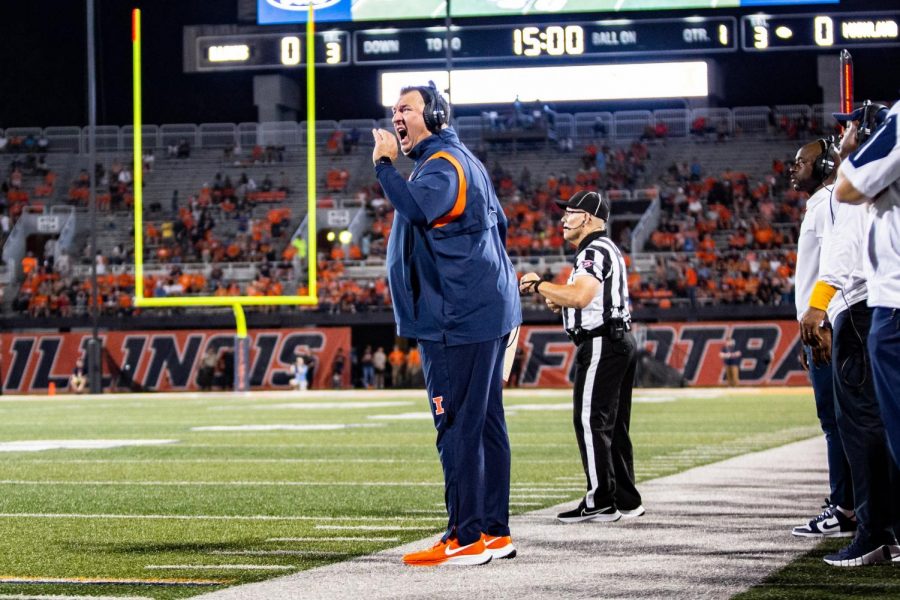 Bret Bielema shouts from the sideline during Illinois’ game against Maryland on Friday. Despite a slew of recent ugly losses, there is still reason for optimism this season in Champaign.

After taking the lead for the first time in the game just under one minute into the fourth quarter, the Illini couldn’t hang on, with a combination of poor decision making, lack of execution and low stamina proving to be the biggest downfalls after the Terrapins tied the game with just over two minutes to play.

The subsequent Illinois drive was shocking.

Two Reggie Love III runs and an 8-yard completion to Donny Navarro gave the Illini a first down on their own 33. But sacks on two straight plays for a loss of 11 and 7 yards, respectively, and an intentional grounding penalty on third down, a play that saw offensive lineman Blake Jeresaty wind up with the ball in his hands, put Illinois inside the 10 and forced Blake Hayes to punt from his own end zone.

Working with a short field and under a minute to play, the Terrapins only needed to get a few yards down the field to get into kicker Joseph Petrino’s range.

And that’s precisely what they did.

A 26-yard pass from Taulia Tagovailoa to Rakim Jarrett put the visitors into the red zone and well within range of a game-winning field goal.

Despite missing a 32-yard attempt earlier in the game, Petrino nailed this 32-yarder as time expired to send Illinois fans home in disbelief as jubilant Maryland players streamed off the sidelines.

Maryland, now sitting pretty at 3-0 on the season, showed Illinois that despite the hosts playing well enough to hang with it for 55 minutes, the Illini simply aren’t good enough.

I didn’t expect Illinois to make tremendous strides on the field in Bret Bielema’s first season in Champaign. With the team boasting the most returning seniors in the country and a roster that features Lovie Smith’s recruits, there weren’t many things, from a personal standpoint, that changed from last year’s 2-6 team.

With eight games still to play and with the offense and defense, it may be hard to find reasons to remain focused on this team instead of counting down the days until the basketball season starts.

I hear you. Let’s all take a collective deep breath, and remember that this team was never expected to make a huge jump when Bielema first stepped foot on campus. Tony Petersen and Ryan Walters haven’t been able to fully establish their philosophies in Champaign yet.

Injuries at several key positions certainly haven’t helped, but that shouldn’t really be an excuse at this point.

Entering the season, I told myself that when considering all the coaching changes this offseason, it’s important to remember the context and not put too much emphasis on any of these early-season games.

While it may be a tough pill to swallow that Illinois is five wins short of bowl games eligible with trips to No. 5 Iowa and No. 10 Penn State still on the horizon, not to mention a Homecoming clash with No. 18 Wisconsin, Illinois has dug itself into quite some hole.

Remaining matchups with Purdue, Charlotte, Rutgers, Minnesota and Northwestern have all become must-win games for Bielema, but regardless of the outcome, let’s remember to be patient and let the Illini’s new head coach establish his culture in Champaign.

It took him five seasons to win his first Big Ten title in Madison with the Wisconsin Badgers. When taking over at Arkansas, Bielema’s Razorbacks went 3-9 overall and 0-8 in conference play in his first season.

How did the program fare the season before he arrived in Fayetteville? It went an identical 2-6 in SEC action.

Arkansas went on to secure three straight bowl game berths, which included back-to-back wins in the 2014-2015 and 2015-2016 seasons in the Texas Bowl and Liberty Bowl, respectively.

This season might be hard to watch at times, and it will almost certainly be frustrating. But give it time, don’t jump ship and, as Ted Lasso says, “Believe.”