Late goal not enough for Illinois soccer to propel past Purdue 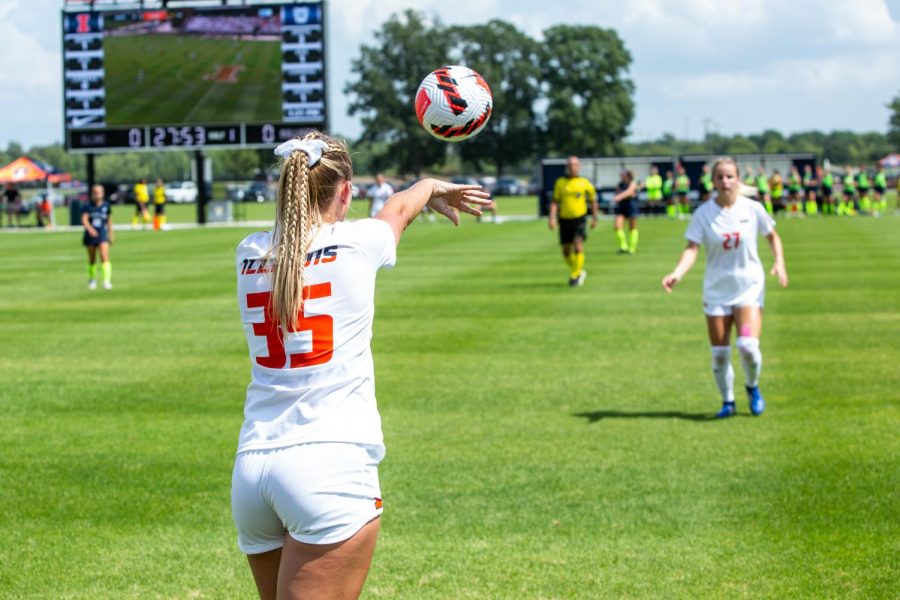 Forward Lauren Stibich takes a throw-in during the game against Butler Aug. 29. A late goal was not enough for Illinois soccer to propel past Purdue this past Thursday.

Marching Illini, cowbells and a loud crowd rocked Demirjian Park after being empty for nearly three weeks. But the noise in the stands couldn’t generate a win in Illinois’ Big Ten home opener, a game in which the team lost 2-1 against Purdue.

“I definitely think we played really well as a team,” said Hope Breslin. “We definitely had some really good moments, and I’m super proud of those, but I think we have to learn that every moment matters and we have to stay disciplined.”

The first 45 minutes ended scoreless between the Illini and Boilermakers. Both teams struggled to maintain a good amount of possession and were playing back and forth with each other after losing ball after ball in midfield.

Although Illinois had its chances at goal, it struggled to put it on frame. Purdue didn’t have the same fate; rather, the visitors were able to get close to the goal and try their luck.

“We’ve got to make sure when we create chances and create opportunities that we do a better job inside their 18-yard box of putting the balls not just near the goal, but where we want them in terms of putting them on frame and putting them behind the net,” said head coach Janet Rayfield.

However, for the Illini, freshman Naomi Jackson was in the net once again and at the top of her game, making save after save.

“Naomi had another good night in goal,” Rayfield said. “I think the save and the corner kick that ended up giving up a goal — I think that’s a young mistake that she’ll learn from.”

The Boilermakers’ best chance of the first half came in the last six minutes of the game. After receiving a through ball, Sarah Griffith shimmied it past Aleah Treiterer. Jackson made the save, and the ball deflected off the post, but Purdue was unable to rebound as Eileen Murphy pushed out for a clearance.

The second half came, and Purdue looked like a different team. Off the bat, they pushed on the attack to try to get an early goal.

Within 10 minutes of the second 45, Purdue got the first goal to break the tie. Griffith barreled down the left side all the way to the endline but got blocked by Treiterer. Jackson pushed the ball out to avoid a corner, but it landed right back to Griffith. Her shot lofted over Jackson and put Purdue on the scoreboard.

Just two minutes later, the Boilermakers were up by two goals. A cross sent deep into the box found the head of Angie Galo and landed in her own net.

The Illini didn’t put their heads down and tried immediately to get a goal to build off the momentum.

In the 65th minute, a long ball from Murphy put Breslin through on goal, one on one, and she put it over Marisa Bova, but the offside flag was raised to deny the chance.

Illinois finally had its chance in the 82nd minute after Breslin drew a penalty kick. Like the Michigan game, the initial shot was missed, but Breslin grabbed the rebound of her own kick to get one goal back.

With just a short amount of time, Illinois put all its energy into getting the equalizer but ended unsuccessful once again at home.

The Illini are back on the road to face Indiana on Sunday with hopes to continue the momentum they have away from Champaign.