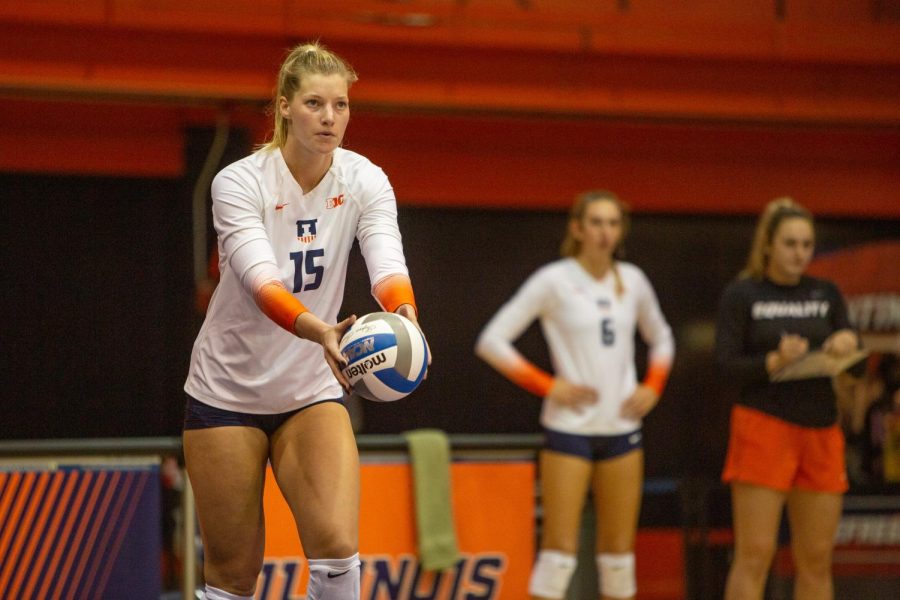 Graduate student Megan Cooney prepares to serve the ball during the match against Purdue on Wednesday at Huff Hall. The Illini lost the match 3-2.

After beating Purdue on Friday in West Lafayette, Illinois welcomed the Boilermakers to Huff Hall on Wednesday night. Looking to win their third straight match against the Boilermakers, the Illini aimed to pull off their second upset in less than a week.

“They played great, and it was a good team, a top-10 team in the Big Ten,” said head coach Chris Tamas. “You gotta find victories where you can, and we’re right on the brink of turning a lot of these games, but we’ve just gotta close the gaps in some of the areas and just be able to score more points like we’re capable of doing.”

The first set was a back-and-forth affair, with neither team ever leading by more than two points in the frame. Megan Cooney led the team with six kills and an ace, while Raina Terry registered four kills and two aces. Fighting off a set point, Purdue used two Illinois attack errors to win the set, 28-26, and jump out to an early 1-0 lead.

After neither team led by more than a pair in set one, Illinois jumped out to a 5-0 advantage to open the second set, led by two kills from Cooney and a kill from Terry. The Illini never let that lead slip away, with Jessica Nunge and Kennedy Collins causing problems at the net, with the former recording three kills and the latter notching four kills in the frame. Leading by as many as 9 at one point in the set, the Illini took the second set, 25-16, and knotted the match at 1-1 after dominating from the first serve onward.

Illinois found its groove to open the third set, and despite going down 3-1 early, the Illini used several big runs, including separate ones of 5-2 and 6-0, to lead by 7 midway through the set. But, the Boilermakers went on their run, tying the match at 14 after scoring seven consecutive points.

The Illini didn’t let the momentum swing affect them, as they used a 4-0 run to take the set, 25-22, via a Raina Terry to eliminate all doubts of a big Boilermaker comeback. Four kills from Cooney, three from Nunge and two aces in the frame put the Illini within a point of pulling off its second upset in less than a week.

The fourth frame was, once again, back and forth, with both teams struggling to pull ahead for good. But, the Boilermakers led by as many as 5 after going on a 6-0 run and never looked back. Despite Illinois fighting off two set points, Purdue took the set, 25-20, to force an all-important fifth set.

For the fourth time in five conference matches, Illinois headed to a fifth set. The Boilermakers pulled out to a four-point lead twice in the set, including going up 10-6. Illinois cut the deficit to as small as a point, but Purdue bounced back every time Illinois put pressure on, ultimately escaping Champaign with the five-set win.

“We always say (fifth sets) are a flip of a coin, and that coin has been going our way as of late, but we couldn’t muster enough to get them at the end,” Tamas said. “I think they had the momentum after the fourth set, and we couldn’t slow them down from there. We just gotta be better in terms of taking chances when we have them.

Cooney led the Illini with another double-double, notching a match-high 18 kills and 11 digs, while Collins and Terry both finished the match with 13 kills apiece.

Illinois moves to 3-2 in conference play and 11-5 overall, and it will head to Madison on Saturday for a rematch against Wisconsin, which beat the Illini, 3-1, last Sunday.